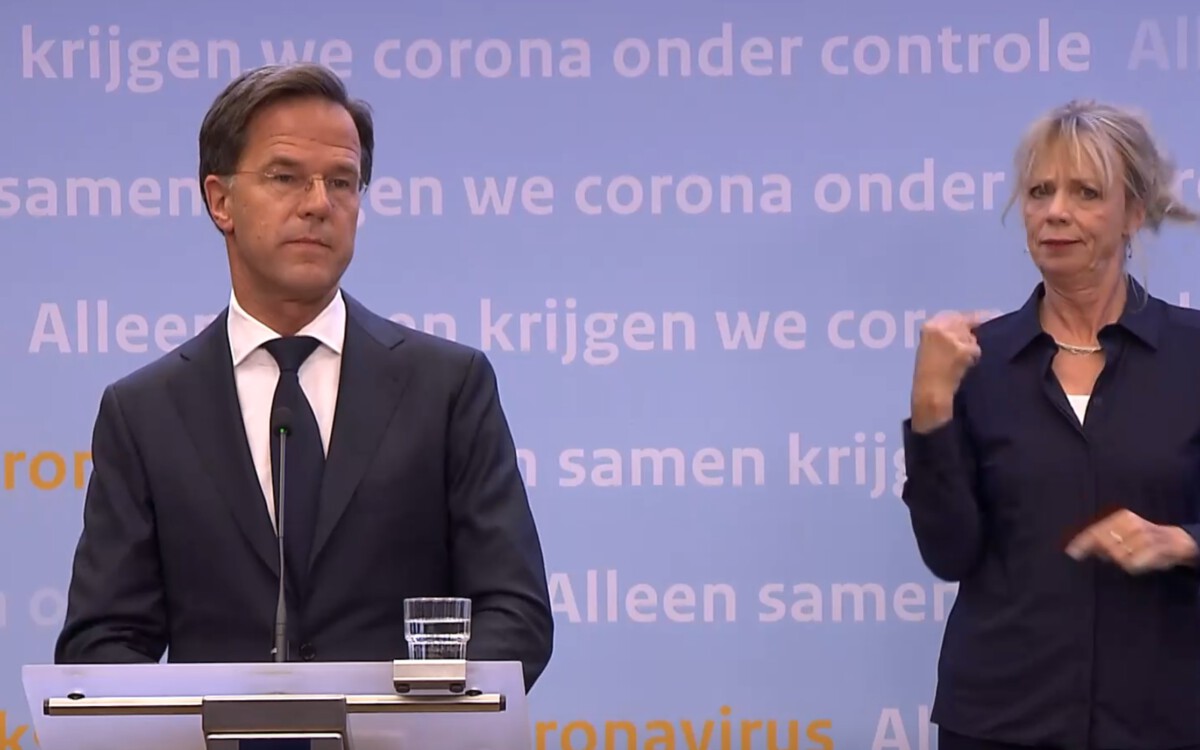 Prime Minister Mark Rutte and Minister for Health Hugo de Jonge have fronted the press. A new range of regional measures have been announced amid skyrocketing coronavirus numbers.

Rutte warned that the reproduction number, which measures how many people one person with the virus infects, has already grown to 1.4. “Yesterday we had over 1700 infections,” said Rutte. “With an R number of 1.4 that number will grow to 10,000 a day within three weeks. We can’t do that to healthcare workers. Not again.”

The government has created a risk three-level system for measures in different parts of the Netherlands. “We want to target the virus hard, with an angle toward certain regions.”

Already, six regions will be classed as a Level Two: Amsterdam-Amstelland, Rotterdam-Rijnmond, Haaglanden, Utrecht, Kennemerland and Hollands-Midden. New measures will apply in these regions from Sunday at 6 pm.

“We want to hit the virus hard, and the region and economy not hard,” explained Health Minister De Jonge. “That’s why we chose a regional approach.”

What are the new measures?

Additional measures announced this evening for the Level Two zones include:

However, local municipalities will announce their own measures from 8:00 pm this evening. Municipalities that have announced their new rules are below, we’ll continue to update this article as others release their new measures.

In addition, general measures that apply nationally include:

De Jonge also addressed the testing delays occurring throughout the Netherlands. “If you try to make an appointment there is a long wait time. We’re working very hard to get some more lab capacity,” he said.

“We’ve bought new machinery, new materials, and we’re making deals with labs and looking for new ways, like a quick test.” However, he warned that this will take a few weeks, so only people with symptoms should get tested. Teachers and healthcare workers now have priority for testing.

The past four days have seen record-breaking infections for coronavirus in the Netherlands. A total of 1977 infections were reported to RIVM before 10:00 am today for the 24-hour period beforehand. The highest daily number before this week was on April 10, with 1327 infections. However, it’s important to note that at the time not all of the population could be tested.

Hospitalizations have been slower to increase. But the number has risen by 67% in the past seven days. There are currently 58 patients in ICU, and a further 230 COVID-19 patients in hospital.

Ernst Kuipers, chairman of the National Acute Care Network, says that the greatest crowds are in Amsterdam and Rotterdam hospitals. “Appropriate measures are needed there to stem the increase in the number of new patients,” he said.

Where are the majority of infections occurring?

The government identified several worrying areas where clusters are emerging. Geographically, areas in the Randstad have had the highest numbers of infections, leading to the level two rating above.

Young people who are more relaxed about distance are also contributing to the rise in cases, said De Jonge. People partying on a Friday go to the supermarket on a Saturday and visit their grandmother on a Sunday. “That’s how the virus spreads,” he said.

Translation: The corona virus is not going well in our country. In regions where the number of infections is increasing fastest, additional measures are being taken to prevent the spread of the virus.

However, Rutte also stressed that over 10% of infections occur in the workplace. He urged everyone to work from home. Restaurants, bars, and cafes are also responsible for clusters of infections.

“If we don’t turn the tide, shops and cafes will have huge consequences. For the people that work there and entrepreneurs, it will be terrible,” Rutte warned.

The government wants to avoid a situation where the hospitals are overrun. “The hospitals are less full, the time in the ICU is shorter, and we know more about treatment,” said Rutte. But he warned that hospitalizations are increasing.

“With the increasing amount of patients, the nurses and healthcare workers have more pressure on them in Amsterdam and Rotterdam,” he said. “They’ve started special COVID sections in the hospitals. In nursing homes, numbers are also increasing. That’s where the most vulnerable people are who we have to protect.”

“It’s not the second-wave yet in hospitals, but we have to work together or the virus will spread again,” said De Jonge. “We know more about the virus, so we can slow this second wave.”

People encouraged to keep up with measures

Rutte acknowledged that people are tired of following basic rules like keeping distance or hand washing. “People are getting hungry for contact, they want to go out and have fun, we understand that. But it’s not clever,” he said.

He stressed that when numbers lowered, it was not because of testing or contact tracing, but because of urgency from the people to bring the numbers down. “In the end, it’s not the measures that kill the virus, we have to do it,” said Rutte. “We have to follow the measures and keep going, only then can we break the second wave.”