No space for your bike? The innovative fietsvlonders in Rotterdam is solving this 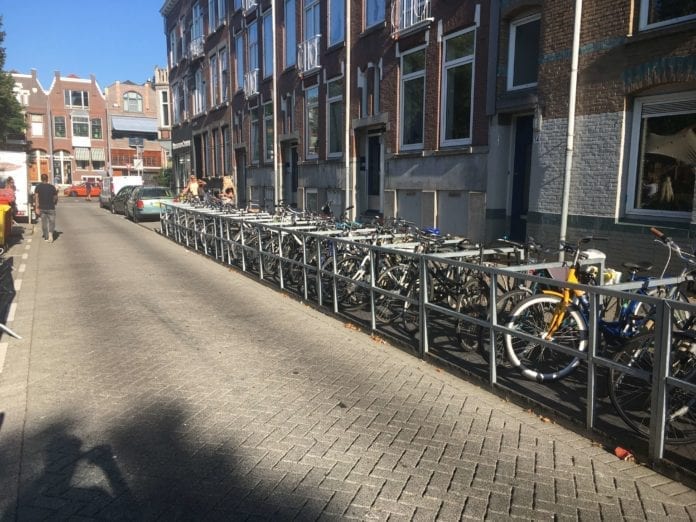 Rotterdam is helping to make the issue of parking your bike a thing of the past. This is by placing ‘fietvlonders’ (bike platforms) on parking spaces, in order to make more room for cyclists to leave their bikes. It’s just another way the Netherlands is trying to encourage people to swap their cars for their bike! So, here’s all you need to know about these new fietsvlonders in Rotterdam.

As we all know, in the Netherlands, the ideal way to travel just has to be via a bike. It’s cheap, it’s reliable and it keeps you fit. Tourists are also always amazed at just how many bikes there are in our cities. As there are more bikes than people in the Netherlands, the back racks get full very quickly. This is usually followed by people taking pictures of it (especially in Amsterdam), as the whole area is just bike madness.

So, what are we doing to solve the hoards of bikes? Not much. But now Rotterdam has decided to prioritise bikes over parking to help solve the issue of clogged pavements and overcrowded bike bays. This is by using car parking spaces, like new bike bays. Less space for cars I hear you say?

Well, the Netherlands is trying to reduce car use altogether and this is how! You make it easier for people to cycle. This isn’t a new concept either – similar things have been done in other biking countries, but Rotterdam has done it better. They have thought of a long-term solution and not just a temporary fix. Well, that’s Rotterdam and innovation for you!

Well, Rotterdam has placed some temporary bike platforms around some neighbourhoods to trial it for a few months. They are simple, yet effective. If all goes well and people are happy, then they will be made a permanent thing. So far, out of the 28 parking spots in the city, 280 bike spaces have been created – amazing! Another 22 locations are also currently being tested, so there could be even more spaces for bikes.

The fietsvlonders have already won a prize for innovation by Tour de Force – so it’s looking like these may be here to stay if they get the thumbs up from the residents. So, look out for them, they may be popping up in a city near you!
Last but not least, a big thank you to Lior Steinberg who was kind enough to let us feature his pics, check out his original article on the fietsvlonders 🙂

What do you think of these new fietsvlonders in Rotterdam? Let us know in the comments!

And check out our little video on how the Dutch are biking straight into the future: