Dutch Cognitive Dissonance: Why Zwarte Piet Both Is And Isn’t Racist 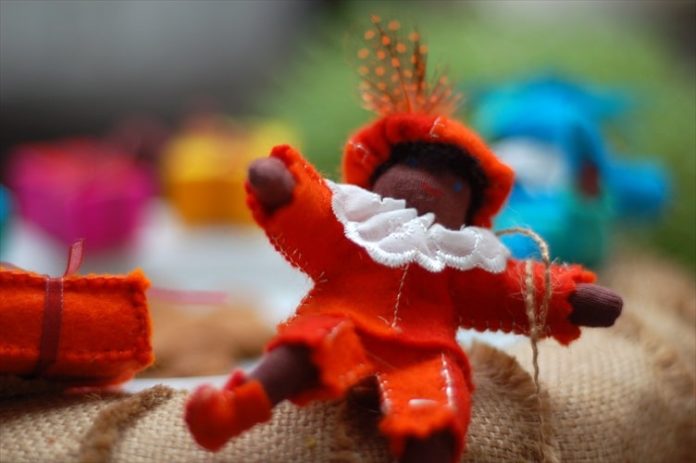 DISCLAIMER: The author of this article really, really, for-realsies didn’t want to write another piece about this overlong debate, but the powers that be just wouldn’t allow for it. So here it is. For your amusement. I guess…

As you get older, some things don’t have the same meaning they once had. Surely I’m not the only adult who has watched childrens cartoons out of nostalgia, only to be flabbergasted by how many creepy sexual innuendos were hidden all along in movies that we loved when we were kids. Even though most of you have probably seen this image before, it helps to illustrate:

Kids see dolphins, adults see a couple making love. Every website on which I’ve seen this picture claims that “research has shown that young children cannot identify the intimate couple because they do not have prior memory associated with such a scenario”, even though none of them bother to source a published scientific study that actually confirms this. Still, you get the idea. Sometimes the same thing can mean different things at different times in your life. Which brings me to the subject everyone seems to love-hate recently: is that Zwarte Piet guy totally racist or not?

Rather than dying a quiet death like it has in the last few years, the debate has absolutely exploded this time, with even the United Nations releasing an official statement on the matter. Yesterday, an on-line petition on FaceBook in favor of keeping the Zwarte Piet tradition untouched received a staggering 1,000,000 likes in less than 24 hours (for comparison sake, that’s 25% of all Dutch people who use FaceBook on a regular basis, the on-line petition called “Zwarte Piet Is Racism” has been around for two years and has less than 10,000 likes as of now). This week, a Dutch woman decided to tattoo Zwarte Piet on her back. Has the world gone mad? (The answer is yes, the world has gone mad).

You might suspect from the previous paragraphs about the ambiguity of images that this article is going to promote an anything-goes-nothing-is-objectively-true view on things. Not so much. What I do want to discuss is the Dutch cognitive dissonance that exists on this issue. For those who are unfamiliar with the term: cognitive dissonance is when a person becomes aware that s/he believes in two or more valued convictions that contradict each other (source). Whereas I personally tend to support those who think that the tradition of Zwarte Piet is not racist or intolerant, I also suspect that there often is a double standard at work in defending Zwarte Piet. Moreover, in my opinion, the (non-)racism of Zwarte Piet is more complicated than a simple yes or no.

The punch-line to this article, in advance: Yes, Zwarte Piet is racist (as in: is a racial stereotype), but no, the present tradition is not racist. I know this may make little sense at first, so please bear with me as I try to explain.

There is a difference between the fact that Zwarte Piet has a history of being a racial stereotype and the fact that: 1) the tradition has changed over the decades into a far more tolerant and accepting version of Zwarte Piet, and 2) in the experience of children, any latent racism doesn’t register. During the Sinterklaas holiday or when it was over, the thought of walking up to a person of African descent and asking for pepernoten never entered my mind. I never thought of Zwarte Piet as a person of a distinct race, he was just the helper of Sinterklaas who wore a silly outfit. Putting a racial label on Zwarte Piet made as little sense to me as putting a racial label on Santa’s elves or reindeer. It was a non-factor. Moreover, Zwarte Piet was not, in my experience, in an inferior position. On the contrary: he was intriguing because he could always do acrobatics (like juggling or climbing on roof-tops). More importantly to my sugar-addicted child-brain: Zwarte Piet was the one who brought you pepernoten and strooigoed, the delicious candy that is only sold and consumed in the last few months of the year. Zwarte Piet could put smile on the face of every child just by entering the room.

I know it can be very annoying when people brush off a sensitive issue with “it’s just your interpretation”, but you can’t factor this out: the exact same visual image is interpreted in different ways. As much a white kid like me couldn’t see the harm in Zwarte Piet, a person of colour rightfully might. Perhaps s/he would feel as if others have gone out of their way to make a black person seem silly, and it is true that Zwarte Piet has often been used as a comic relief, making him do naive and childish things that would cause trouble for Sinterklaas or his fellow Zwarte Pieten. Especially in very old children books centered around the Sinterklaas holiday, Zwarte Piet often spoke in a stereotypical negro fashion, showing very poor vocabulary and often not fully understanding what was going on.

The cognitive dissonance exists in not acknowledging that, yes, Zwarte Piet is a racial stereotype, and yes, in the older tradition, he was often portrayed as a somewhat inferior character. Keep in mind however that when I spoke about my personal experience with Sinterklaas as a child, this took place around the late eighties, and things had changed significantly by then. Still, the resistance to the racist history surrounding Zwarte Piet persists. Sometimes this cognitive dissonance is very open and obvious, just look at an often heard response like “Zwarte Piet is not racist, and if you don’t like it, then you can **** off to your own country!” This becomes even more puzzling when similar things are said by a black person (does that make it less, or more racist? I don’t know).

Regardless of all the social unrest created by this issue, I sincerely doubt that this tradition will change in the near future. Even the aforementioned ‘official’ statement by the UN spokeswoman Verene Shepherd has been denounced by UNESCO due to her not being an official of any importance at the UN. Though there is a lot of debate now in The Netherlands, I don’t think that this tradition will change, nor that it has to. What I would like to see is a more nuanced debate, and sufficient respect to those who genuinely feel offended by the character that is Zwarte Piet.

On a final note, I’ll leave you all with a message of hope: if anything is to be changed and the centuries old tradition of Zwarte Piet must go, then I’ve already got the answer: the Dutch should simply replace Sinterklaas & Zwarte Piet with their brütal HEAVY METAL counterparts: Satanklaas & Corpse Paint Piet!

Previous articleThe Dutch Daily News of 23/10/2013: The UN giveth and the UN taketh
Next articleDutch News of October 25th