Romans in Clogs: the Roman Empire in the Netherlands 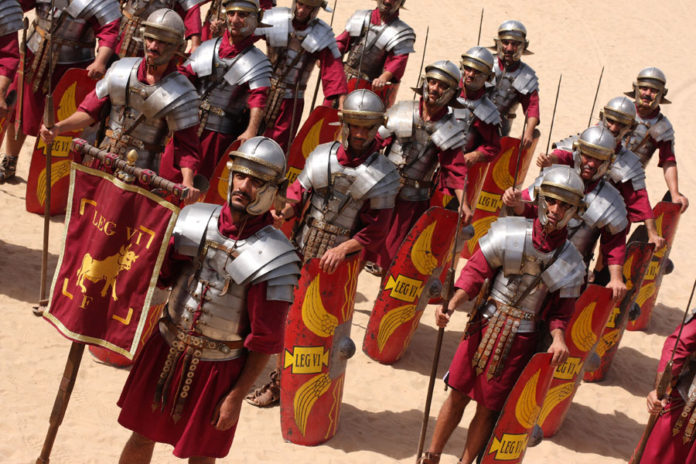 Long before the days of wooden shoes, leather Roman boots trampled Dutch soil. The southern half of the Netherlands was conquered by forces loyal to Julius Caesar and remained part of the Roman Empire for 450 years. This period drastically altered the course of history in the Low Countries, and traces of its influence can still be seen.

The Roman Empire in the Netherlands

From 57 BC to 53 BC, Roman forces conquered the land south and west of the Rhine river, known as the Nederrijn in the Netherlands. That’s roughly the southern half of the country on a modern map. The Rhine became the northern frontier of the Roman Empire. Military encampments and forts were constructed along the river at familiar places like Traiectum (Utrecht), Albaniana (Alphen aan den Rijn), and on the North Sea coast at Lugdunum Batavorum (Katwijk, near Leiden). The largest was the camp at Ulpia Noviomagus Batavorum (Nijmegen) on the river Waal.

To the north, the tribes inhabiting this region remained free of Roman rule. The most prominent were the Frisii, or Frisians, concentrated in Friesland and Groningen. The Frisii were initially allies of the Romans and even paid taxes, but soon revolted and lived freely north of the Limes. For Game of Thrones fans, the Free Folk north of the wall might come to mind. It’s a terribly inaccurate comparison, but feel free to imagine wildlings and white walkers roaming around Groningen anyway.

The original inhabitants in the conquered southern lands became part of the empire. Among those people were the Batavi, a small but powerful tribe living around present-day Nijmegen. For several decades the Romans had a good relationship with the Batavians. Many served in the Roman military and a good deal of cultural exchange took place. This was all well and good until the Batavi rebelled – almost successfully – and were then crushed by the Romans.

Roman history abounds in Nijmegen, the city I currently call my home. The name is derived from the Latin Noviomagus and reflects the rich history of this city during the Roman Empire. Nijmegen boasts the proud title of “oldest city in the Netherlands,” although this fact is on shaky ground. Maastricht also proudly claims the same title. This battle over history is based merely on a difference of interpretation; Nijmegen was the first to receive Roman City rights, while Maastricht never did.

The strategic importance of Nijmegen is clear. For one thing, the city is situated on the river Waal. Nijmegen is also something of an anomaly in the Netherlands because parts of it are very hilly and wooded. For readers living in the rest of the Netherlands, let me explain: a “hill” is a land formation that is higher than the land around it but not as high as a mountain. Aside from military strategy, this local feature makes for good views and great hiking.

These hills also laid the ground for an impressive Roman aqueduct running throughout the city. Nowadays, trail signs mark the path of the former construction. It was only after weeks of following these arrows, in search of some ancient Roman ruins, that I realized it’s just a trail.

It was a letdown at first, but I was looking for the wrong thing. History is more than some timeworn ruins. The excitement comes from knowing that someone else came before you, two thousand years ago, walking this path at the edge of an empire.