Zwolle is the perfect destination for a Dutch day-trip. This star-shaped town is packed with unique history and beautiful landmarks that will pull on your heart strings all day.

From stunning churches and old city walls to theatres and fancy restaurants, there’s something for everyone in this town. But before we get into what you can see and do there today, let’s take a short journey through the fascinating history of this Dutch treasure.

The beginnings of Zwolle

Around 800 CE, Frisian merchants and troops of Charlemagne founded the town on a swelled up piece of ground between four rivers, IJssel, Vecht, Aa and Zwarte Water. Called a “Suolle” (to swell in old English) the swollen piece of land was the only place that remained dry when the rivers overflowed. Over the centuries the settlement’s name morphed into Zwolle. The city would have been called “Swell,” except that an early group of warlike German tribalists called Salians didn’t like speaking English.

Zwolle gained city rights in 1230, and it started trading with the Baltic Sea region in the mid 13th century. Because the town was located on the junction of four rivers, it was the perfect center for trade between Scandinavia and the Rhineland via the Zuiderzee and the North Sea.

The city became very prosperous. In 1361, a group of poor noblemen, jealous of the city’s success, set fire to Zwolle. The city recovered and continued to thrive. It officially became a member of the Hanseatic League in 1407. As a result, the 15th century was Zwolle’s “Golden Age”.

Back in 1682, St. Michael’s catholic church tower collapsed due to a heavy storm. The town of Zwolle was going through some tough times and had no money to make the repairs. Strapped for cash, the town’s elders decided that since there was no church tower left to hang the bells, they should sell them to the town next door, Kampen.

To make some money on the deal, Zwolle representatives asked a high price for the church bells. Kampen accepted the offer and when the bells arrived, they were damaged, and did not ring-a-ding-dong. In revenge, Kampen paid in small denominations of copper coins.

Zwolle distrusted Kampen and wanted to be sure they truly paid the entire price. After rigorously counting this vast amount of coins, their fingers turned blue from the copper. This spawned the monnicker of Blue Fingers which would be significant throughout history.

Before money and blue fingers, the area saw some human activity in the Bronze Age over 5,000 years ago, as indicated by the discovery of a woodhenge in 1993 at a suburban development site. The circle of wooden poles was an early version of a clock and a birthday calendar without names and birthdates.

Zwolle and the Second World War

A remarkable story about Zwolle happened during World War II when a French-Canadian soldier, Private Léo Major (1921–2008), single-handedly liberated the city from the Germans. On April 13, 1945 the Régiment de la Chaudière, a Primary Reserve infantry regiment of the Canadian Army, reached Zwolle. It was reported to be a German stronghold so before firing artillery on the city, the commanding officer asked for two volunteers for a reconnaissance mission to scout the German force. Private Major and his friend Corporal Willie Arseneault accepted. To keep the historic city from being destroyed, the duo decided to try and capture Zwolle alone.

Around midnight, Arseneault was killed by a German soldier. Infuriated, Major decided to continue the mission alone. He entered Zwolle near Sassenpoort and the rest is a Hollywood movie, except that his exploits were real. He stormed in and out of the city almost a dozen times during the night with his submachine gun blasting away, crisscrossing streets, running around buildings and private homes by tricking the local German garrison into believing that there was a much larger Canadian force attacking the town.

Overnight Major killed a few SS officers, captured and delivered several groups of German POWs and burned down the Gestapo headquarters. At 4:30am the rest of the Germans had left. With the help of some courageous Zwolle Blue Fingers, Private Major preserved the city for posterity. Walking through the city, one can only imagine what it would have been like without Private Major’s heroic feat. Major was made an honorary citizen of Zwolle in 2005 and a street was named after him.

Visiting Zwolle today: things to do and see

Zwolle has everything one might imagine in a modern-day city including theaters, a variety of shops and boutiques, hotels, restaurants, pristine parks and even a beach in the summer, but it also has retained its historic flavour. Zwolle has Medieval facades, a star-shaped city moat, lined with stately merchants’ homes, aged trees, fountains, sculptures and sections of the old city wall and fortifications (the ramparts were destroyed in 1674 during the Anglo-Dutch Wars).

Zwolle has several distinctive landmarks. In the 15th century the town was completely surrounded by a fortified wall with 23 towers. Built in 1409 the Sassenpoort city gate is the only tower left that was part of the old city wall. This jewel is listed as one of the Top 100 Dutch Heritage Sites.

The Peperbustoren (Pepper Mill Tower) is a 75-meters-high tower of the Basilica of Our Lady. The eye-catching tower looks like a pepper mill and can be climbed to the top. The tower is so famous that it even has a cheese named after it, peperbuskaas (spicy pepper cheese).

The 15th-century Gothic St. Michael’s Church, with its new tower, has the world-famous four-manual Schnitger organ (1721). The old Broerenkerk (Brothers Church), founded in 1465, was repurposed in 1988 from a protestant church to a magnificent cultural center replete with a gift shop, book store, and café.

On Bethlehemkerkplein (Bethlehem Church Square) is another repurposed church, which is now an all-you-can-eat Japanese sushi restaurant, Blue Sakura. Around the corner is Swolsch Friethuys, judged the best fries in the Netherlands in the AD Friettest 2017 contest.

A former court house until 2005, the Museum de Fundatie possesses a collection of art works ranging from the end of the Middle Ages to the present day. The museum was expanded in 2012-2013 with the addition of a new and unusual egg-shaped extension on top of the building’s roof for additional exhibition space.

If traveling from Amsterdam, you may want to take the new Hanzelijn (Hanze Line) from Lelystad to Zwolle. The 50 km (31 mile) rail line with trains traveling at 200 km/h (120 mph) was inaugurated in December 2012 by Queen Beatrix. The Amsterdam-Zwolle travelling time was cut by 15 minutes.

Before leaving be sure to take back some Zwolle mustard, Zwolse Balletjes and Blauwvingerkoekjes (Bluefinger Cookies) to remember Zwolle and its resilient citizens. And never forget French-Canadian soldier Private Léo Major.

What are some of your favourite things to do and see in Zwolle? Let us know in the comments below.

Feature Image: Michielverbeek/Wikimedia Commons/CC3.0
Editor’s Note: This article was originally published in November 2017, and was fully updated in October 2020 for your reading pleasure. 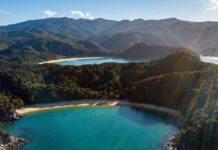 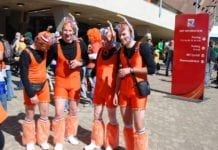 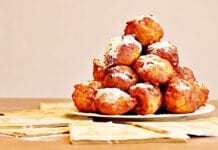