Biking in Amsterdam: Your cycling commute could power people’s homes in the future 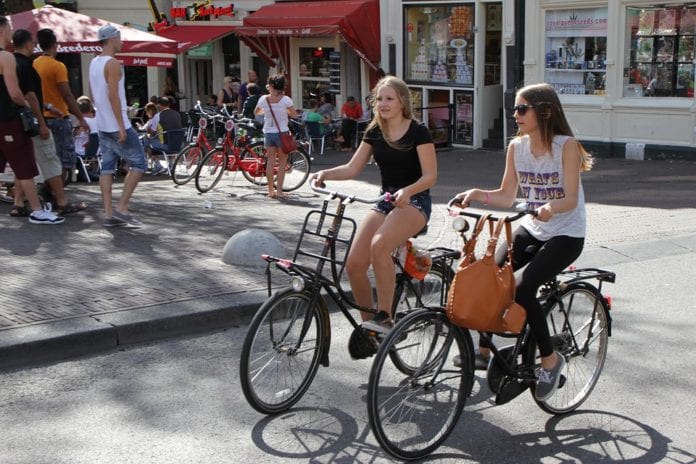 Are you biking in Amsterdam? Then check this out:

Cycling is THE thing to do in the Netherlands. There are actually more bikes than people living here and many of us use these bikes to commute to work, for leisure purposes and for our shopping trips. Amsterdam is the cycling capital, so what if you were told that your Amsterdam. commute could actually generate energy for your local area? If the million of miles people commute collectively, was stored and generated into energy, it would actually be able to power homes.

This a proposal set forward for Amsterdam’s Clean Energy Challenge by Guillaume Roukhomovsky and Blaž Verhnjak.

S-Park is a bike rack system which will help make this idea a reality. The S-Pack is a front wheel, which can be placed on any bike frame and as the bike is being used, all of the energy produced by the movement is harvested and stored in batteries within the wheel. This wheel will stay on the bike indefinitely and can be used like any front wheel. Once the bike is then returned to the bike rack, the stored energy then enters the electrical grid (providing the rack is connected).

This sounds like an incredible idea, as it’s no effort for anybody else and it is all done automatically. All you can hope for is that people still continue to cycle for miles and then park their bikes up properly at the end of the day. It is predicted that if 30 bikes cycled for 2.2 miles per day every day, then it would generate 1 kilowatt-hour per day. Not bad for minimal effort.

When will it be made reality?

Sadly, so far this is only a proposed idea and a prototype has not yet been produced. If they get selected, then they will be able to test out their idea and providing all is well, it could be the thing of the future for Amsterdam. However, it’s caught so much attention already, then they will likely be able to try out this idea whether they are selected or not.

Then all that’s left to do is implement is throughout the whole of Amsterdam (and then beyond). Let’s see what happens!

What do you think of this idea? Let us know in the comments!

Previous articleThousands of people are said to be wrongly accused by the Public Prosecution Service
Next articleSad story and online commotion: Child calls another child ‘Zwarte Piet’ because of his skin colour

Farming for the future: why the Netherlands is the second largest food exporter in the world

Thanks to decades of innovation and hard work, the Netherlands is the world’s second-largest agricultural exporter, after the U.S. With groundbreaking...