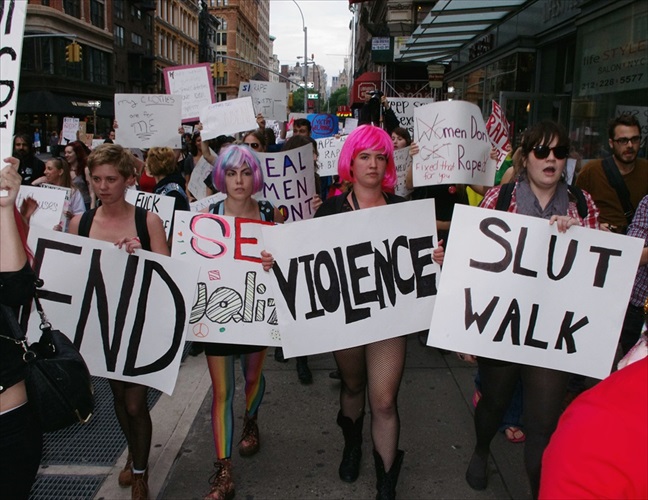 Last week, there was a bit of a fuss about a documentary called Sletvrees. Sounding almost the same as the word smetvrees (germophobia), it aptly translates as ‘slutphobia’ and refers to the fear of women to be labeled as a slut. The intention of the director, Sunny Bergman, was to investigate the persistent prejudice against women who choose to have many sexual partners. A trailer is posted below, you can watch the full documentary here (warning: mature content).

Let me be brief and give you my major complaint against this documentary up front: the documentary tries to claim a prejudice concerning sexuality that effects all people as if it were a problem that solely effects women. In my humble opinion, this masochistic compulsion to put women in a position of being the victim is the greatest threat that poisons modern feminism. Rather than protecting the rights of women and creating more equality, they often only emphasize and strengthen the differences between the sexes. That is not to say that all feminism is bad: there is a lot worth fighting for when it comes to inequality between the sexes, I’m saying that the subject that Bergman has chosen just isn’t it.
Case in point: early in the film, a friend of the director is invited to showcase her ‘Hall of Fame’, a list of over 140 men that she has slept with. Shortly after this little exhibition, they discuss the double standards on being promiscuous as either a man or a woman and they consult the dictionary on the word ‘nymphomania’.

After reading the definition, the lady-friend scoffs and says: “So, apparently only women can be nymphomaniacs…” Very true, miss Bangs-a-lot, but that’s ignoring the rather relevant fact that there actually is such a thing as the male equivalent of nymphomania. It just goes by a different name: satyriasis. In fact, both are different names for the same clinical disorder: hypersexuality. I’ll grant you that satyriasis is far less known than nymphomania, but this is a prime example of how one-sided this documentary is.

Somewhere halfway into the film, the director’s sister makes the following remark/complaint which will prove to be the pivotal thought behind this analysis of 21th century sexuality: “Men are free to do whatever they want.” As in: nobody cares when a guy has sex with as many women as possible. Again, a half-truth. A more complete way of phrasing this would be: “Men are free to do whatever they want, except when they don’t.” Here’s the funny thing about double standards: they work both ways. Many women feel pressured into restraining their sexual activities for fear of being labeled a ‘slut’. Simultaneously, many men, especially in their younger years, feel pressured to have as much sex as possible and with the most desirable mates (read: attractive females) as possible. In addition, men (or should I say ‘boys’?) are often expected to lose their virginity as quickly as possible. Whether this potentially unlimited supply of sex is a privilege or a burden is a matter of perspective. What matters here is that regardless of gender, anyone has at times felt insecure or pressured about his or her sexual life; there is a constant anxiety that yours does not fit the standards of society. In a rather generalized way, the current situation resembles this:

Here is the point that the documentary seems to have missed: there are always, always sexual taboos, because sexual taboos never disappear, they can only change. Despite giving attention to pulp like Men are From Mars, Women From Venus, and the abominable Fifty Shades of Grey, the director does not seem to have done any deep study on gender analysis and social critique. There are some quick references to the sexual revolution, but there is no further account on what this revolution exactly accomplished.

There is a very brief moment of awareness that sexual prejudices work both ways later in the film, as Bergman acknowledges that men who are attending seminars on how to be better lovers feel embarrassed about this fact. Sadly, this theme is not further integrated in the film, as it continues to single out women as being victims to socially accepted prejudices.

I will say that by the end of the film, I came to sympathize more with Bergman’s views. She rightfully points out that in the world of pornography, women are constantly portrayed as disposable objects of desire. There is also the accurate remark that, especially in hardcore pornography, women are portrayed as having uncontrollable sexual desires and that they are simultaneously celebrated and punished for this, as many hardcore porno movies show women being degraded and taken advantage of.
Bergman also puts more nuance into her analysis after she is shown attending a workshop where women embrace the so-called ‘slut archetype’. Several women are seen dressed in ‘skanky’ outfits while trying to dance as seductively as possible. The host gives the following remark: “Do you know why [the slut archetype] is being devalued? Because it is so powerful.” Bergman is not persuaded, but is shown to be sympathetic to this notion.

Then again, you know what they say: “No one comes back the same from bitch school.”

(Alright, I’ll admit: the entire article was just an excuse to post that video)

Previous articleThe Shared Economy of Holland: Share Our Ideas
Next articleDutch Daily News 19/11/2013: Justice Is Served, Or Not…

What is borrelen? The Dutch art of going for a drink with co-workers

What is borrelen? Ultimately, it's the concept of work hard, play hard. This perfectly describes the work ethics of professionals...