5 Reasons Swedes, and you, should support Ajax’ Europa League Final. (Or else!)

Bobby Salomons
Facebook
Twitter
Pinterest
WhatsApp
It’s almost happening – the finals of the Europa League between AFC Ajax and Manchester United in the Friends Arena in Stockholm, Sweden. Excitement is huge in the Netherlands, even in rival cities like Rotterdam, about a Dutch football team making it all the way to the top of European competitions – the pressure on the Amsterdam club is enormous to make it happen. But, can it? Well, the Dutch like to believe they can and we believe that with the power of the Swedes we can make it happen. You all can make it happen.
We see the Swedes as friends, since a long, long time and we are certain of your support but should you – for whatever reason – pick the wrong side, we’ve compiled a list to convince you otherwise.

It’s not just the Russians, or the American right-wing, who know how to spin a story – or just entirely fabricate one – and we know that Sweden’s image is precious. We respect that and we totally want to make sure the following news doesn’t make it out there. 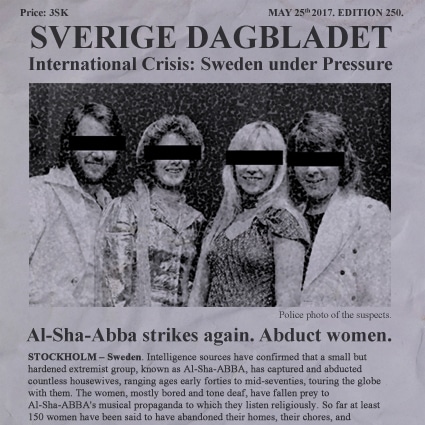 STOCKHOLM – Sweden. Intelligence sources have confirmed that a small but hardened extremist group, known as Al-Sha-ABBA, has captured and abducted countless housewives, ranging ages early forties to mid-seventies, touring the globe with them. The women, mostly bored and tone deaf, have fallen prey to Al-Sha-ABBA’s musical propaganda to which they listen religiously. So far at least 150 women have been said to have abandoned their homes, their chores, and gluten-free diets to join the ranks of the extremist organization who’s battle cry “Mamma Mia!” can be heard in the many, many disturbing videos released that show the women and their captors ecstatically partying till the early hours of the evening and then going to bed early.
Many European intelligence and police agencies have expressed their worries and left behind husbands and teenage children express their heart breaking grievances. Swedish authorities however refuse to interveine before the tour is over, which could be as long as ten days, or until “They clean up their own mess and let mom play her own music in the car”, so said Petter McJerksson head of Sweden’s feared Cultural Police.”

#4: We are not afraid of taking Hostages.

Who doesn’t love Ikea? It’s like a zoo with furniture instead of animals and you get to put your kids into a cage filled with booger-covered rubber balls. What could be worse than a group of unidentified men in clogs, Dutch accents that smell like weed suddenly barging in and taking hostages? That’s right – we’ll take it that and far and take away the most precious things. We’ll list the hostages for you.

– Björn (Desk Chair) in a relationship with Lilli (Desk Lamp), from Uppsala, Sweden.
Björn and Lilli met through mutual friend Ullskar (pen holder) and happy and content with their laminate wood-life and moderate price tags. They had much to look forward and fine with a fake, plastic laptop and non-functional keyboard for demonstration purposes up until taken against their will by armed men and forced to support a soccer club at gun point. Word has it Björn lost at least one wheel in the chaos and is currently unbalanced, Lilli is entirely without a lamp since the beginning of the violent events and completely in the dark.

– Karl (Kitchen Towel), sibling to Malinda (Bath Mat) from Stockholm, Sweden.
Karl and Malinda  come from a proud family of cotton products that need to be regularly washed but aren’t,  coming in several shades of blue, grey and and some sort of green-blue-color that only women know the name of. Both have expressed their extreme terror at the hands of the violent men who, according to witnesses, left behind Karl & Malinda’s pet Gildurn (Soap Dispenser) unattended and may have knocked over their cousin Elsbet (some sort of Towel Rack) with blatant disregard.
Karl’s ego in particular has been stained by the men who do not wash their hands with soap after going to the toilet and Malinda expresses great fear of being violated by curly hair from less-public places. Gildurn, reportedly, is gravely upset and refusing to hold any soap.

Thought that was the worst we could do to Ikea, Sweden? Guess again! We know all about your secret success: “Dildö – the Dish Brush/Flash Light/Sex Toy-combination that is neither hygienic nor pleasurable”.
To be fair, we may be a tad jealous, even though Amsterdam is the XXX-capital of Europe, even we couldn’t come up with this one. And it stings. 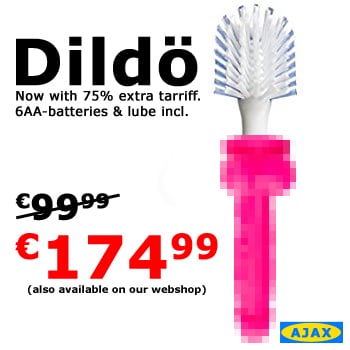 Frankly, the ingenious dish brush that smells funny and lights up places that can’t be seen without an X-Ray and a Gynaecologist is totally amazing. Even though it doesn’t really clean the dishes that well and at least twenty-five women had to have it surgically removed, it is still an admirable step forward. Wouldn’t it be a shame if this huge financial success would suddenly be facing a 75% import tariff? Imagine how many women would be left unsatisfied and how much less intimate the plates would be smelling. This is something that could crush Ikea’s net income and reduce it to a second rank, Jysk. That’s right, we already have Danish support. Fear us.

#2:  Swedish “Meatballs”: We know your dirty secret. (You sick bastards)

This is it. If everything else fails, and we know you’re smart enough not to let it come to that, we have one absolute fail save option. We know the secret ingredient to Swedish Meatballs and we’ve been throwing up ever since. We’ve also done all the testing and it came back positive, you sick sons of…

Lets be straight up about this, we know. We know what you do to all the poor Danish that migrate to Sweden to find shelter from the cold, mean streets of Copenhagen and with all the drunk Finnish rally-drivers that keep racing through Göteborg’s public parks and the Norwegian fishermen that “supposedly” keep “mysteriously” disappearing off of the Swedish coast… You grind them down into tiny, little pieces of Scandinavian-meat and mix them with egg yolk, bread crumbs, diced onion, a little bit of nutmeg (not too much!) and add some salt and pepper and then – you sick, sick people – bake them in a warm pre-buttered skillet for several minutes while whisking with a wooden spoon and serving with parsley and rich gravy. That’s what you do!

Who would’ve thought? The kind, good-natured Swedes, a bunch of cannibals who eat their fellow Scandinavians. You make us sick! And we both know that if this comes out in the open, Swedish Meatball revenue will drop by at least 2,5% to 5% on All-You-Can-Eat Wednesdays! If that doesn’t scare you, well… We give up.

#1: We actually really like you and we hope you like us too. (And you’d hurt our feelings if you didn’t)

Okay, so – all threats set aside. We really hope you’ll support us because Ajax vs. Manchester United is a lot like David vs. Goliath. You see, Ajax is a team that – in comparison to any Premier League team such as Man. United – basically has no budget. But it is a team rich with tradition and football success, a team admired for its hard work, innovative play and good sportsmanship on the field.
Unlike many other competitions the Dutch league(s) are relatively untouched by billionaire investors and mega-corporation sponsors – instead the Dutch have always believed that a true soccer loving heart is the key to success, even though they were slipping away against clubs with seemingly unlimited budgets.

It’s been fifteen(!) years since Ajax last played a final in the major European competitions, but it has worked hard and believed steadfast that one day it would be able to rise again. We, here in Amsterdam and all throughout the country, hope that it will and that it’ll make a decisive difference for Dutch football as a whole.

Comings Wednesday a team of young rookies, who struggled their way into the finals, will be facing off a team of seasoned pros who have a lot less to lose than Ajax should they not make it. The Amsterdam team will be defending not just its own honor but that of a whole nation.
The Dutch know that the Swedes especially are appreciative of hard work, innovation and good sportsmanship – that they pick the little man over the big man. And so, we hope, that the Swedish and many others around the world – even if just this once – will root for the hopeful, young team from Amsterdam and watch a small nation in the heart of Europe explode in celebration if they win. No matter your pick, we hope you enjoy the match as much as we will. Thanks for rea

Previous articleYES! Great weather in the Netherlands all week long!
Next articleDear Manchester…