The Crisis, the Calvinists and the Complaining

Wow, that’s the third time this week. I walked into *pick one* fastfood-chain. Looking at the bored and uninterested  face behind the counter I tried to stir up a conversation to lighten both of our days up. ‘how are things going over here?’. ‘yeah rather bad, it’s not that busy.’ He said passsionatelessly; becoming of a true underpayed fastfood-chain employee. ‘yeah I can see that’ I said as the wind was blowing a tumbleweed past the store windows. ‘How come?’. I’m such a sucker for keeping deadly wounded conversations alive (AKA conversational CPR). “You know the crisis and all.’ He says.

Ahhh yes, the crisis,  my old friend… We meet again!

I could have seen this coming. It actually makes sense. The economic crisis is hurting a large amount of small and middle sized businesses. What am I saying? Basically everyone. So asking employees or store owners ‘why things are bad’ I realize I can expect this response. But it’s bigger than that. I’ve had several conversations where I tried to steer clear of the subject. But it’s like the Titanic’s iceberg. The crisis has become THE watercooler conversation for most restaurants, café’s, bars , offices and shops in town. I have lost count on how many times the subject has been lurking behind the bushes, ready to stab me (but only stabs me after a five minute wildly edited chase.). But you know what fascinates me about this: what is not being discussed when the crisis is brought up.

First of all how long has this been the talk of the town? Is there nothing better to discuss? Is this what everyone silently agreed upon to be the number one conversational topic when I was away? Although it might sound like it, I don’t solely blame individuals for bringing it up. The news has a huge part in this. Sometimes I get the sense I’m watching reruns when watching the news and ‘actuality’. Hasn’t this guest already appeared on that other show? Isn’t she basically saying the same thing as before? Can we please put more creative content out there. Let’s twist and turn this story. I do want to give credit where it is due, Tegenlicht had some very interesting newer perspectives on the crisis. Watch! More tips are welcomed!

Secondly the crisis has become the instant excuse for every store and business that is not doing well. There are virtually no more bad business models or shitty business plans in these times. Let’s blame the crisis.  It’s all the crisis, right? How can a restaurant be empty? Or a novelty store not be doing well? Rather then scrutinizing ourselves it is much easier to just blame the crisis. The government even condones it. The banks are not mismanaged and blinded by their short term hunger for profit… No no, don’t be silly: it’s the economic crisis. Here have some money so we can both survive this harsh winter and watch our economy blossom again. Ohh wait….. I especially love it when people call this the worst crisis of the last hundred years because obviously they never heard of the great depression (our version was even ‘greater’). We are so fucking spoiled without even realizing it. 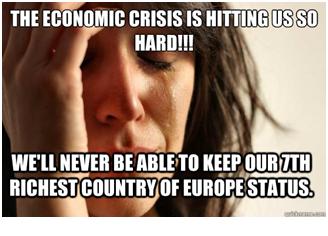 I always love to call the kettle black so that’s what I’ll do right now. The Dutch are a people that truly love to complain. It’s even in our courtesy passport. Our watercooler moments and small talk revolve around negativity. If it’s not the NS(Dutch Railroads) that is fucking things up, it’s the weather that sucks. If it isn’t a governmentFAIL then it’s our economy. We are prone to just nod our heads and call it a day.

And you know what? That’s fine. We are the grumpy uncle at the typical Dutch birthday you have to converse with because the other seats were taken. We are the country that complains about our investments in southern Europe while whole countries are sinking. We are the downstairs neighbor complaining about the noise when you’re having a party. We are Debbie Downer Lite.

We are not a people of enthusiasm or big gestures. We are a people that decided we wanted to convert a swamp to land and then actually try living there. The constant whining is our cultural swamp monster. Scooby Doo, where are you?

It’s the long line of Calvinists ghostwhispering to us from beyond the grave. ‘Why would thou enjoy thyself, is our sober lifestyle and focused work mentality not  good enough for thee?’ (OK: so my Calvinist ghost impressions suck, who knew).

But you know what? It’s what binds us. We love to complain, because we know we’ll do it together. We have fun doing it. We connect through it. We make cynical jokes and join in on sarcastic banter.  It’s the little nod and agreement after the initial complaint that gives us a shared understanding even if it seems slightly depressing for outsiders. We bitch to bitch together.  So let it rip. Let’s bath in moping and mop the floor with it.

And yet… I won’t be caught off guard on this particular subject anymore! Next time the crisis makes it way into the small talk with an employee or bartender I will just nod and say ‘I know, right.’  Maybe I’ll even work in a little joke. I will smile about the connection we just made.  Then I will take out my gun (obviously in these fantasy scenario I own one) I will shoot the person in his or her face and take the money from the cash register and make a run for it. Didn’t you know? There’s an economic crisis goin’ on.