CultureLiving in the Netherlands
September 11, 2016

Digging up the Dirt on the Dutch Cleaning Obsession 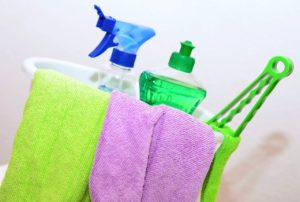 Growing up, my Dad was a fastidious huisvrouw. He spent countless hours zipping around the house with a vacuum. He would viciously attack any ‘mess’ and roar if us kids ate anything without a plate. But he can’t help it – he is Dutch.  The Dutch have an enduring reputation for being ‘clean freaks’. Eyeballing the spotless streets and towns only confirms this reputation. But it begs the question: Why all the fussiness? And are the Dutch really that obsessive? Well, roll up your sleeves: it’s time to delve into the very curious history of Dutch style cleaning (and discover why cows play a star role).

PS. If you’re not into cleaning yourself, you might want to check out our article about Helpling, the online marketplace to help you find a cleaner!

The Golden Age of Cleaning

For firsthand tales of the former, it was straight to the horse’s mouth: my Dad. He grew up during the 1950s, the ‘Golden Age’ of cleaning. Evidently, obsessive cleaning was the norm. Everything that could be cleaned, would be cleaned. Quite literally. Some diligent souls would clean the roof tiles, as well as the gravel. Yes, the gravel. Furthermore, during the big ‘Spring Clean’ even the ceilings and walls would be exorcised of impurities. Cleanliness was next to godliness. 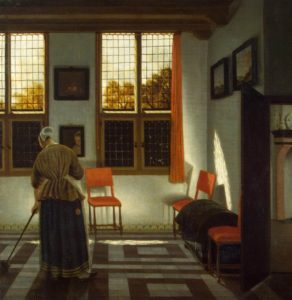 Sacred: The Dutch have long held cleaning in high regard. Pictured: Room in a Dutch House by Pieter Janssens Enlinga

Things had to be spotless in time for the Sabbath. On that day, any work was strictly forbidden. Consequently, women spent most of the week cleaning with aprons only being taken off for church. These dedicated Dutch dames would all follow a rigorous, synchronised cleaning schedule. On Friday, for example, everyone cleaned their stairwells. With oodles of bleach. Unsurprisingly, the smell still lingers in my Dad’s memories of Friday afternoons. However, his military-like dedication was not enough.

Even Dutch parades have to be clean:

People still managed to make extra work for themselves – namely, by cleaning clean things. At Dad’s place, things in storage had to be cleaned. Sometimes, you weren’t even allowed to use things at all – lest your filthy mitts tarnish them. There was the ‘good room’ (mooie kamer) – a living room that was strictly for special occasions. Unfailingly, moeder cleaned this room every week. Similarly, Dad’s Uncle would fry in the garden shed (because heaven forbid the kitchen was less than immaculate!).

This domestic purity is deeply engrained in the Dutch psyche. Centuries old account chronicle foreign visitors’ amazement at Dutch cleanliness. They described how the Dutch would scour canals, market places and ships. And even cows. In fact, our humble bovine buddy is the root of this radical cleaning culture.

Don’t Touch! This room was probably off limits to preserve its pristine appearance

About 1500 about half of all Dutch households produced dairy to earn income – the boggy, soggy dutch land was often unsuitable for farming. Add to that, the Dutchman’s need for cheese and a predominantly dairy-based economy was born. Making good dairy required a high degree of cleanliness and so all equipment (hands, churns, wooden tubs and the like) was thoroughly cleaned. This sanitary system meant Dutch butter was excellent in terms of taste and freshness. Crucially, the dairy famers daughters would migrate to cities to earn a living as maids. Naturally, they took their cleaning habits with them – and so the Dutch cleaning culture began. Nowadays, the Dutch are still enthusiastic cleaners – though minus much of the obsessiveness of Dad’s youth. And next time Oma gets into a pickle because of a dusty windowsill? Well, you can thank the Netherlands’ legendary dairy.

Previous articleStudying in the Netherlands – What’s that like?
Next articleADO fans throw stuffed animals for sick children – World melts