The Dutch and their bikes. 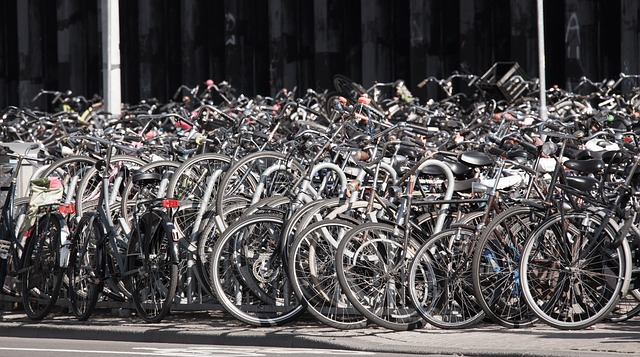 Bikes (known for some as bicycles):

Whether you are a newcomer to The Netherlands, or if you have lived here for a time, you are bound to notice the Dutch love for bikes. The bike stalls are littered with them and you can find special “parking garages” built exclusively for bikes.

But who can blame them? The Netherlands is a wonderful place to cycle. The very flat landscape, the dedicated bike paths and the short distances make it an easy way to get around.

There are some things to think about when getting a bike in The Netherlands. There are several types of bikes depending on where you want to go and what you want to do. Two of the more popular ones are the “omafiets” (grandmother’s bike), and the “bakfiets” (cargo bike).

It is also a very good idea to get an extra lock. But a measly small lock from any old store won’t do. It should be a 5 kilo chain. Why? Because there are plenty of thieves out there and bikes are a popular target. My Dutch boyfriend says that “If you don’t have a lock which weighs more than your bike, you are just asking for it to get stolen”

Even if you don’t own a bike, there are some things about the Dutch bike culture you should know. Like that it seems to be the Dutch way to have more than one person riding on the bike, so don’t be surprised if you see whole families on one.  It also seems common to decorate your bike with plastic flowers in different colors.

There are some things to know when you are out in the traffic:

Are you a biker?

Then take heed of the different signs on the bike paths, and go with the traffic.

Are you a pedestrian?

Then it is good to be careful and look both ways before crossing bike paths.

And, as a default, you are NOT allowed to walk on the red bike paths. Doing so would be asking to get run over.

Are you a car driver?

Well then it sucks to be you.

In the cities the cyclists, especially younger people, are crazy crossing the roads. They have a “right of way” and they know it! Why? There is this thing called “Strict Liability”: meaning that even if a biker ignores a red light and drives straight into the side of a car it still is the car drivers “fault”.  This mixed with some teen spirit makes a dangerous combination.

Two times I’ve watched in horror as a bike (loaded with two people) ignored a red light; only to be missed, by millimeters, by a bus or other vehicle. They were lucky: each year 9000 people get seriously injured in a bike accident. 190 of them do not survive.

But if I do have to give anything to the Dutch cyclists, it would be that they are consistent. Nobody, except for professional bike racers, wears a helmet.

So if you are a car driver and you drive into a city:

Beware of the cycling Dutchman

Previous article
One Nerd to rule them all?
Next article
Dutch Slavery: Our Dark Past