Three Things every Dutchie should know about the American Gun Culture

Immediately after the D.C. Naval Yard shooting my social media outlets exploded with Dutch friends condemning the American gun culture. In a few days I have seen comments like “Of course trigger-happy America has another mass shooting”, and “America and guns = Stupidity”. Even major Dutch news sources reacted aghast and with repulsion to the gun culture that was deemed responsible for the shooting. When it comes down to guns in America, any form of objectivity is lost to Dutchies. To most Dutch people it seems illogical that the US has not prohibited firearms. Even though the Dutch claim to be very familiar with the American culture, there is a huge disconnect with this part of the American culture. To Dutch people guns equal bad and they should therefore be outlawed. Any American who does not see this point is unreasonable and stupid. The Dutch are simply unable to see the issue through a different pair of glasses. Before I spent four years in the US I too held the same beliefs. However, after these years I have come to understand the American point of view on guns and I feel this is worth sharing in order to reduce the disconnect. There are three parts of the American gun culture that Dutchies should consider before passing on judgment about America and guns.

The gun culture is very much ingrained in the American society. The Second Amendment of the Bill or Rights, ratified in 1794, states that “A well regulated Militia, being necessary to the security of a free State, the right of the people to keep and bear Arms, shall not be infringed”. The amendment sees an armed population as necessary to safeguard the American state. Although what constitutes as a militia has been up for debate, the 2008 Supreme Court case D.C. v. Heller upholds the idea that a militia is the general population. Thus, the Americans have a longstanding history of being able to legally posses firearms. This history can be seen in the American sentiment that partly due to the use of weapons the Revolutionaries overthrew the Brits. The gun culture is something that was part of the foundation and growth of the American state. In a way guns can be compared to the Dutch polders. Both were part of the nations’ historical rise and are part of the countries’ history (and both possessing a gun and living under sea level might be dangerous by the way). Because of the historical value of guns as part of the American culture, firearms are part of the American heritage. Guns are often important family heirlooms and presented as a piece of history. They are not seen as dangerous equipment, but as a detrimental part of American history and therefore part of the American culture. 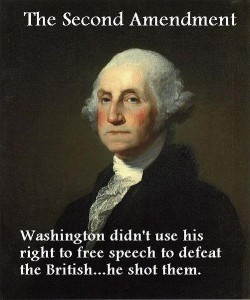 Well that’s one way to look at it

Because guns are part of the American history, a lot of Americans, especially in rural areas, are grown up around firearms. From a young age they learn how to safely operate them and the dangers guns can create. The average American has a much more realistic outlook on guns than the average Dutchman. Most people in the Netherlands only touch a weapon during the yearly ‘kermis‘ and therefore generally have a skewed outlook on the use of firearms. In general Americans have a very responsible view on weapons compared to Dutch people. The overwhelming majority of Americans store their firearms in safes and keep them away from young children. Americans realize the power that is vested in a firearm and know that with this realization comes responsible use of the firearm. Whenever I shot a gun with American friends they thoroughly explained how to safely use the weapon and made me aware of the power, including the dangers, that comes with a weapon. Dutch people usually cannot comprehend this responsibility. Of courses there are exceptions to the rule, but in general the gun responsibility that Americans have is often overlooked by Dutch people. 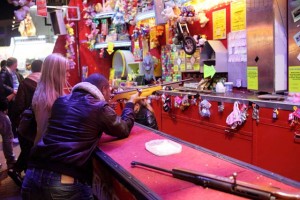 Admit it, this is the only time you’ve actually held a gun

Once I had an American friend ask me what the most dangerous wild animal was we have in the Netherlands. After a long thought I responded with “Jellyfish, since they can hurt you the most” (really, think about it, what other animals in the Netherlands are more dangerous?). It took a couple of seconds before my American friend realized that my answer was completely serious, to which he responded “What? You don’t have bears or something” (uh, how about no). Like every Dutchmen I was a little bit blown away by his reaction, but counter-asked “Bears? Hell no, by the way what do you do if you see a bear?”. My American friend’s simple answer? ”You shoot ’em!”. Americans are a lot more likely to encounter dangerous wildlife than Dutch people are. The easiest way to defend oneself against these animals is to simply shoot them down. In some areas in the US having a firearm at home is a precaution in case you encounter a dangerous animal. The ownership of a gun is a necessity to safeguard your home. For other Americans the possession and use of a firearm is a necessity for a steady food supply. There are still American families who rely on hunting for their daily meat on the table. Instead of cutting it on Friday night, daddy will just shoot it. In rural America guns are a necessity to provide for and safeguard one’s family, something that is unthinkable in the Netherlands. 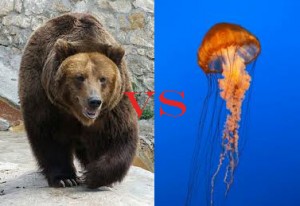 I’d totally put my money on the jellyfish

Understanding of the American gun culture

The gun history, responsibility, and necessity might shed a different light on the gun culture in America. As a Dutchie the gun culture in the US seems such a foreign concept that it is hard to understand why Americans cling so much to their firearms. Dutch people often have the idea that every American is gun crazy and carries a revolver with them at all times. Since gun possession in the Netherlands is one of the lowest in the world, Dutchies have trouble sympathizing with the gun culture in the US. Hopefully this article changed a bit of your outlook on American and their guns. Regardless if you disapprove of the widespread gun possession in the US, a little understanding of the other culture is always helpful.