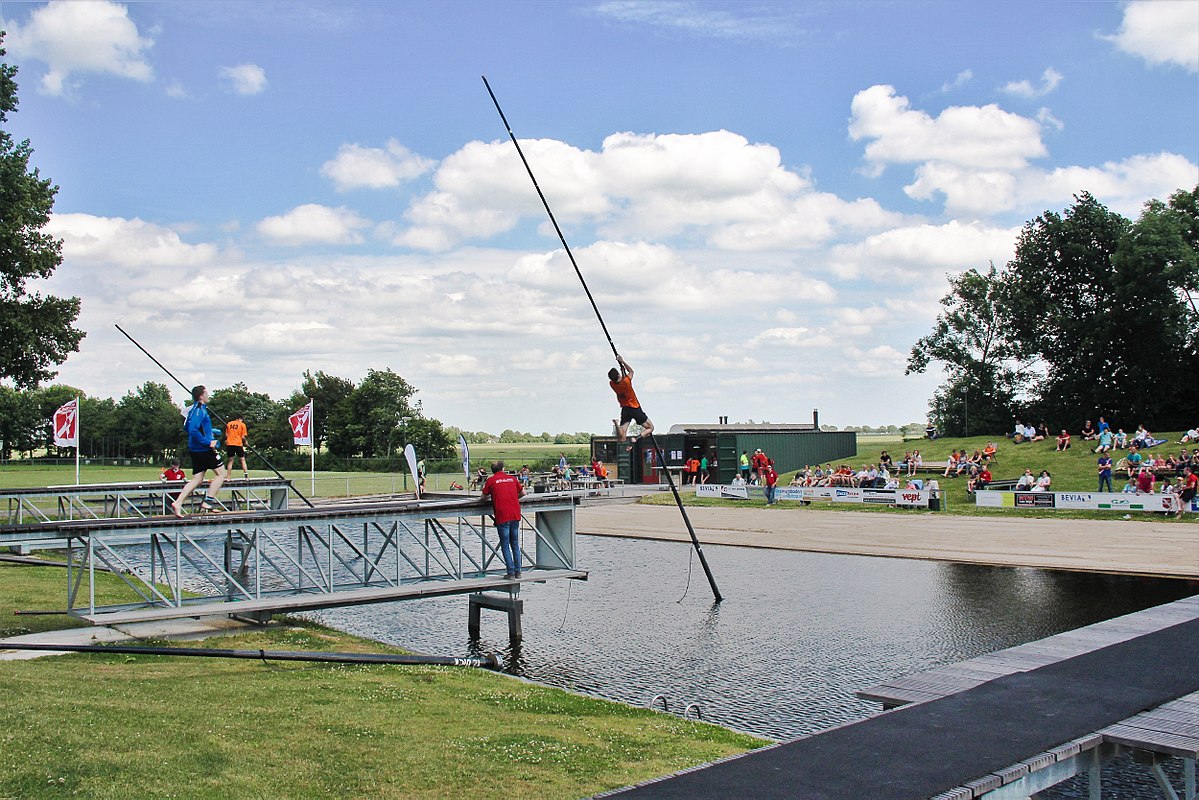 There are many weird, wacky and unusual sports in the Netherlands that will raise your eyebrows and make you question Dutch sanity.

Of course, we all know that Dutchies love their football, hockey and skating. But take a journey into the local communities of Dutch provinces and you’ll discover a plethora of bizarre competitions.

Brace yourselves, because we’re about to count down the 11 strangest sports in the Netherlands.

11Paalzitten: the sport of sitting

How long can you sit on a pole for? Yup. These Dutchies apparently love sitting around, because they’ll do so for over 90 hours! The poles do come with a board to sit on, and competitors can have short toilet breaks, but my word, this can’t be much of a spectator’s sport.

10Fierljeppen: canal jumping in the Netherlands

In a land so full of canals, jumping them was bound to become a sport at some point. Competitors achieve this using a pole of 8-13 metres long, which has a flat round plate on the end to prevent it from sinking into the muddy bottom. The fierljeppen technique is to run, jump, grab the pole and climb as quickly as possible to the top whilst attempting to control the direction of its fall. To finish, competitors land on a sandbed opposite their starting point.

9Korfbal: the Dutch mish-mash of basketball, netball and handball

In korfbal, two teams play, each with four women and four men. The object of the game is to get what looks like a soccer ball into a hoop, which sits atop a 3.5-metre tall pole. This fast-paced game has the same intensity and passion you’ll find in US NBA basketball.

Although korfbal was invented by the Dutch, over 70 countries from around the world compete in this sport at the World Games.

Sjoelen is a popular game that has similarities to shuffleboard. In fact, many Dutch families have a sjoeltafel hiding away in an attic somewhere. The aim is to slide 30 wooden pucks down the long board and through small wooden arches to score points. The game is surprisingly competitive, as players compete to get the top score out of a possible 148 points.

7Kaatsen: tennis with no rackets?

Kaatsen, or Frisian Handball, is believed to be one of the oldest ball games in the world. As the name suggests, players hit a ball with their hands to each other across a field. The scoring works similarly to tennis, and the first team to win six games wins the match. Hitting such a tiny ball across an entire field with only your hand is truly an impressive skill to watch in action.

6Beugelen: a stone ball and a wooden bat

Beugelen was originally a favoured sport among Holland’s upper-class back in the 1400s and has since become a popular people’s sport right across the Netherlands. In this sport, a heavy ball is pushed with a wooden shovel and the aim is to get the ball through the ring in the centre of the floor, kind of like a cross between croquet and boules.

Skûtsjesilen is a sailing competition in which competitors race historic flat-bottom boats called skûtsjes. The boats were originally used for transporting peat and manure to farms over shallow waters, but their manoeuvrability makes them ideal for a good race. Many of those who compete are direct descendants of the ancient Frisian skipper families. The championship takes place every summer in Friesland and is a serious matter of honour for the villages and towns that compete.

4Klootschieten: chuck it as far as you can!

Humanity’s obsession with throwing balls is fully embraced in the game of klootschieten. Participants use speed, power, and a special technique to throw a kloot as far as they can — the record currently 106.2 metres! A kloot is a wooden or plastic ball filled with lead and can be anywhere from 200-800g. The winning team is that which can throw the kloot across the five-kilometre rural course in the least amount of throws. The game is said to have originated from a weapon which the Frisian people used to throw at their enemies. Yikes!

This is more of an unusual event than a weird sport in itself. Elfstedentocht is a long-distance skating tour over the frozen canals, rivers and lakes of cities in Friesland. The route changes every year according to where enough water has frozen over but is usually around 200 kilometres in length. Unfortunately, this spectacular event hasn’t happened in years due to a lack of ice.

Since Elfstedentocht has become increasingly rarer from about the 1970s, the Dutch have instead organised the indoor marathonschaatsen or marathon skating event that takes place each year. Competitors speed around the three-kilometre long ice rink in Biddinghuizen for a whopping 125 laps in the men’s division, and 80 laps in the women’s division. With strategics and team tactics, this sport is so much more than just a bunch of Dutchies skating in circles!

1Tegenwindfietsen: cycling into a storm

You have to be slightly crazy to do this one. Tegenwindfietsen is essentially cycling straight into a headwind, which sounds like absolute torture! The Dutch Headwind Cycling Championships take place on the Oosterscheldekering storm barrier and is announced three days before a storm is due to hit, usually in autumn or winter. The course is 8.5 kilometres long and is biked in the midst of storms which can reach as high as wind force 9! Do you see what we mean by torture?

So there you have it! Of all the many sports you can play in the Netherlands, this bunch have got to be the weirdest.

Would you be up for trying any of these sports? Let us know in the comments below!