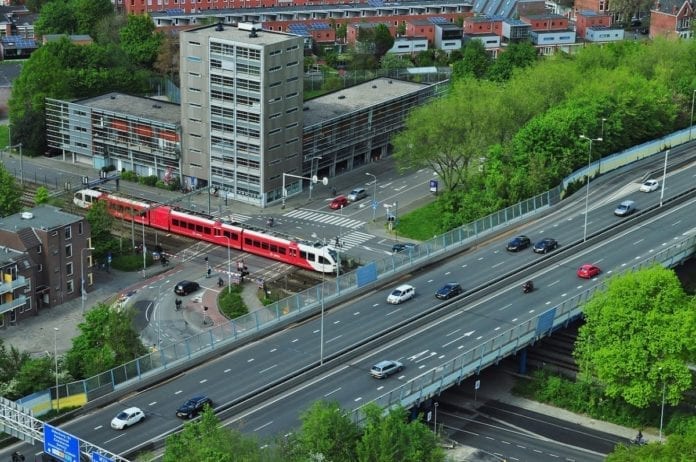 In many places around the Netherlands today, pension strikes have got people moving from trains to the roads to avoid delays. Ironically this has created awful traffic conditions. People from NS, the GVB’s and other public transport workers have set up a strike to demand earlier retirement age.

NS tweeted that people should work-from-home in case of unexpected delays. Yep, we’re all going to work from home today.

Roads are a backed up mess this morning

Here’s a roadmap via Dutch traffic watch ANWB indicating freeway congestion. This is caused by a wave of commuters turning to their cars to get to work.

So why is all this happening in the normally strike-free Netherlands? Speaking to Trouw, a police officer on strike today, said “In addition to being physical, the work also becomes harder mentally as you work longer. You put all the shocking events that you experience in your backpack, that keeps piling up”.

“She recently had to tell a boy that his mother had jumped from the flat. Another time she is the first to walk in with a man who has hung himself”.

Above, the chairman of the FNV trade union, Han Busker, initiates the strike in The Hague this morning. Over the past few weeks, students have protested inaction on climate change, the education sector has gone on strike in The Hague and even some Schipol Airport workers are on strike. Employees of the police, fire department, Defense and ambulance, among others, will drive on the A2 and A28 highways from across the country to the Malieveld in The Hague at a speed of only 66 kilometers per hour.

FNV has announced strikes for Monday 18 March 2019. This has consequences for some of our operational processes. Travelers might experience longer waiting times than usual between 12:30-1:36 PM. https://t.co/bCXBRU5LZN

Why are emergency service workers on strike?

Emergency workers are often on the frontlines of worst-case-scenarios, they’re also assaulted so regularly the law had to be changed to punish violent offenders. Employees of the police, fire department, defense, and ambulance workforces, will drive on the A2 and A28 highways from across the country to the Malieveld in The Hague at a maximum speed of 66 kilometers per hour.

How did you get to work this morning, are you working from home? Follow the discussion on our Facebook page.

Previous articleNo early trains, a big strike and NS says that you should do a ‘work-from-home-day’
Next articleShooting in Utrecht: multiple shots fired in an Utrecht tram, several wounded reported