Zwarte Piet 2014 edition: to be or not to be, that is the question

Due to great popularity and big demand, the Zwarte Piet 2014 special edition discussion is here! And in August of course, the news cucumber season, so bring on black Pete to spice and stir things up – guaranteed. I like the spirit.

When I arrived to Holland in 2008, I heard about them, Sinterklaas and Zwarte Piet. It being celebrated on 5 December and back then with my baby-level Dutch, the translation and timing suggested it’s the same deal that we have in Tsjechie where we call it Saint Nicolas and his little devils.

And in principal, it’s the same. Our Saint Nicolas is white, with long white beard and hair, red bishop attire and bearing gifts to kids. His little devils, and in Tsjechie we also throw in some angels, are black and are portraying the evil. If you’re good, you are rewarded with nice things like sweets and chocolate and if you’re evil, you get a piece of coal or a potato.

Growing up, I was really terrified of the whole thing. And that’s what it’s meant to be, adults scare you pretty much all year long – in moments of mischief you immediately hear that Saint Nicolas will come for you and the little devils will take you to hell.

Most Czechs have family members dressing up for the occasion and having fun over how the kids get scared when they turn up in the costumes and blackened faces.

Now, in Tsjechie we are not religious at all. In fact we are quite atheistic but we don’t like that word, so saying ‘not religious’ is more acceptable. Still, it’s a religious holiday and as such it’s widely celebrated in some shape or form around Europe. You will find it in Germany, Austria, Switzerland, the Benelux…probably more but these are the ones that I know about.

Oh Amsterdam, what have you done?

About two years in my Dutch residency, I started paying attention a bit more. I saw Zwarte Piet for the first time and he didn’t look like our Czech little devil. He looked like a devil of a different kind. On top of it, he was coming on a boat from Spain – how bizarre – and he was not meant to be scary, he was skipping with joy behind Sinterklaas in the role of a helper.

Now, I must say I was a bit surprised by seeing a black person in the role of a servant to the white holly figure. At least in the Amsterdam version that I’ve seen with my non-dutch eye.

This video is completely 100% true

I don’t think he was always meant to look like this but somewhere along the line, Zwarte Piet started exhibiting the transformation to the version we see today.

When you speak to the older Dutch generation (above 70-yrs olds), they will tell you that Zwarte Piet of their childhood was simply a black Piet, with black cheeks and unruly, curly hair, meant to look like a street, dirty kid a bit.

You therefore wonder when has this transformation to the form we see today started. Perhaps he started transforming a bit by bit over time and people never realized it.

Echt Hema!
Wait, it gets even more funny..although it cannot be easy to be in Hema’s shoes. Or the Bijenkorf’s for that matter. Or I guess any other shop that is involved with this endangered species. For Pete’s sake, he has been around, shielding all the insults and going strong, for years and now this. For the first time this year, the staple of the Dutch folks HEMA is not totally sure what may tip the scales. Best to be prepared and so the otherwise typical Dutch HEMA is removing images of Zwarte Piet ahead of the season. Echt HEMA
Bijenkorf plans to continue to tiptoe around the issue and only display him with no cliche characteristics of a black slave. He can still be present but get rid of the fro’ and golden earrings.
But the Echt Hema lover don’t despair, he may be back next season if the waters seem calm(er). Apparently, the new strategy is to watch the debate closely like a hawk and champion whatever current trend the season demands.

Apparently, Zwarte Piet racist or not discussion is an on and off game in the Netherlands. It’s fun to watch it and I myself like to throw it in to spice up a dying dinner conversation.

All Dutchies, across the race board, start immediately crying out loud not to smear their black Piet with indecent suggestions of racism.

I am white, so what do I know. Perhaps I would feel different if I was not, I have no idea. I have no right to tell others how they should feel or not about the visage of Zwarte Piet. But I am open minded, or so I like to think, and tolerant and so I understand if anybody is offended; it is their right and we live in a democracy.

Since nobody is trying to celebrate slavery or wipe the said Piet out, perhaps the fabulous rule of keeping it simple could be employed and gradually alter his visage over time?

Being my usual die-hard optimist, I believe Zwarte Piet shall overcome and make his usual appearance with the estimated time of arrival on 5 December, the early evening hours. And I can imagine more pressing matters worthwhile flying UN people over for to the Netherlands, than to hold debates about the correct way they think a Dutch holiday should be celebrated. 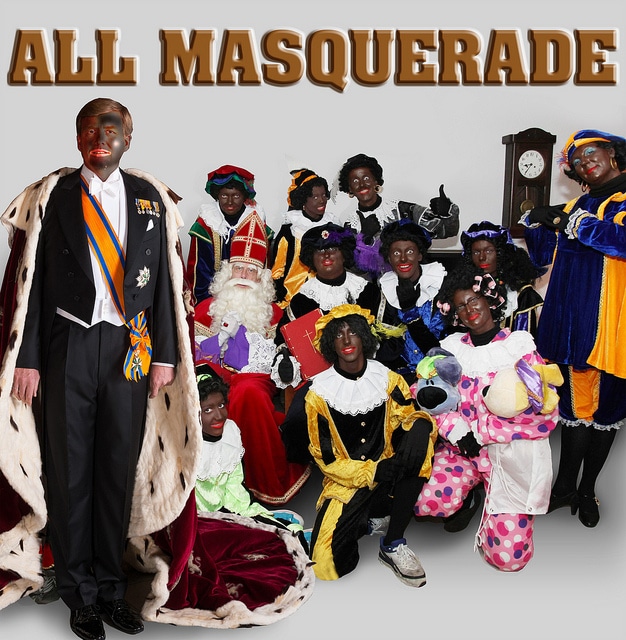