I take the metro out of Amsterdam Centrum and head towards Zuid-Oost, where the traditional terraces of the city are replaced with the vast 200 metre-wide high-rise buildings of Bijlmermeer. The visual contrast between this unique neighbourhood and archetypal views of Amsterdam is staggering but, nevertheless, its unique architecture combines with an influential post-war and post-colonial heritage to make Bijlmer a beautiful, and significant part of Amsterdam as the Dutch capital city.

I’m here to meet Remy Jungerman, a Dutch-Surinamese artist, who in April will be one of four artists (Ruta Butkute, Babette Kleijn and Sachi Miyachi) showcasing their work at ‘Arrows shot from the Bow’, an exhibition hosted in Rietveld’s ‘Huis Cordemeyer’ in Apeldoorn. Jungerman’s work is reflective of his cultural identity; a colonial Surinamese-born artist with African ancestry, who has lived in Amsterdam for over 25 years, and studied at the Rietveld Akademie. I caught up with Remy in his studio in Bijlmer, to discuss colonialism, De Stijl, heritage and Rietveld.

[DR] There are parallels which can be drawn between your work and De Stijl in shape and form, but the colours and patterns in your work deviate from De Stijl’s fixation on primary colours. For the exhibition, do you plan to work with the colours inside Rietveld’s house, or juxtapose your work against its strictness?

[RJ] No, I’m not going to work with the colour of the Stijl and that’s not something I work with anyway. The colours in my work have other references. I think by using my composition and colour combinations, and not doing something that is in their colour range, I am able to add something extra to what they have been doing. It is about a hundred years after the movement started and, in that time, things have changed, artistically and culturally, and I want to show that.

[DR] I think it’s quite easy to see the influence of your Surinamese heritage in the colours and patterns used in your work – are there other ways you feel your heritage has influenced your art?

[RJ] I think my heritage and my art are parallels, they go hand-in-hand. I say its parallel because I am trying to research into the traditional, cultural, and religious spheres of what has happened and what is currently happening in Suriname. I began with a Surinamese influence from the patterns, which had developed in textiles in Suriname. From there I made a link straight from my work to Africa. I had many questions – how did the pattern, geometry and grid of Surinamese textiles, make its way across the Atlantic and into the Americas, and Suriname? By answering that question, I find links and parallels with Western contexts and one of those is De Stijl. So actually my starting point and focal point is not necessarily De Stijl, but it is my African heritage. The intenseness of De Stijl is different from the geometry of the Surinamese African heritage. The geometry and grid in my work comes from textiles, which were woven in Africa, which people brought in form and rhythm with them to Suriname, or memorised. The Kuba cloth from the Congo and the Kente cloth from Ghana have very strong geometric patterns, which the enslaved captives took to Suriname and this is my starting point.

[DR] So in that sense, if both the colour palette and geometric shape are more influenced by African-Surinamese textiles, would you say that the origins of your work are not influenced by De Stijl at all?

[RJ] Well I can’t say no! [laughs] It’s a very conscious connection, it’s not a coincidence.  The best way for me to explain my work in a western context, is to relate it to a familiar western idea. By relating to that western idea, I get a space where I can then tell my own story. With my story alone, there is no point of reference. You see, Western art history is very much in itself, even though it has been inspired by many non-western ideas (for instance Cubism developed from the African mask, and aesthetics in Africa). African ancient art is there but not really written about in a contemporary way. What I am trying to do is re-write that history and the only way I can do that in my setting is to make references to De Stijl movement, because that’s the only way people understand. So I guess… I chew it first and so people can swallow it [laughs] that’s a very Dutch thing to say.

[DR] That’s such a funny way of summarising it. You feel like you have to contextualize your work in a Western setting to make it digestible for Western people.

[RJ] Yeah, but at the same time I can’t avoid my Western past. I am also part of this reality – I was educated at the Rietveld Art Academy in the Netherlands. At art school in Suriname we had been studying Western and non-Western art history, and that philosophy was very much based on ideas of nationalism and independence, so that’s what educated me to do now what I am doing – all these layers are now part of my work. But, at the same time, another layer is my Western influence which I can’t avoid. I was born in a Dutch colonial context, after all!

[DR] From what you have said, a large part of your work is the mixing, clashing or combining of different cultures. De Stijl, as a movement, liked to think their work had a strong social duty. Do you think your work also has a kind of social role?

[RJ laughs] Yeah it does. Hmmm. I think the social role is as I maybe said before – looking at our society from a different angle and trying and fill the gaps which were not acknowledged in Western arts history. That’s what socially I think my work is dealing with. Perhaps being born in Suriname and living in the Netherlands is forcefully making me fill that gap. Sometimes I don’t know if I want to fill that, but out of my contexts and history, these things are almost inevitable.

[DR] So, as a person who is born in Suriname and is a product of Dutch colonialism, do you think it was inevitable that your work would come together and fill this gap between two cultures?

[RJ] Yes I think so. And maybe I can’t avoid it. I am using my own cultural heritage just because that is something I know. And then by using it you find out that there are a lot more combinations and parallels to draw with an international context instead of separating them.

[DR] Even in an ideological sense, then, you can draw parallels with De Stijl; you both seem to share ideas about the ‘universal’ and the ‘global’.

[RJ] Yeah definitely – in the idea of universality I definitely see a connection. I like to think I kind of started where they finished. ‘Victor Boogie Woogie’ by Mondriaan is an important piece of work because the musical genre Mondriaan was listening to, the Boogie Woogie, became popular during the late 1920s, but developed in African American communities in the 1870s. In that alone, lies the concept of the ‘universal’, and this is perhaps not what was intended, but more connected to spiritualism – they were trying to find a wider context. I carry all these different cultural layers, and so I feel this wider context is within me.

The Maroons are people who escaped slavery and went deep into the rainforest of Suriname and created a new community and culture from their African heritage. Those people who escaped slavery all came from different parts of Africa so they created this new combined culture in Suriname. I think the answer is that coming from that area, I am carrying all these layers – sometimes it is hard to answer it with yes or no. The answer is that there is a lot more happening to be able to come to the essence of what the whole deal is.

[DR] Finally, how does it feel to be presenting your work in a house with such strong cultural history and ties to a movement with which your work draws such evident parallels?

[RJ] I am honoured to be able to show my work in that setting. As I was saying, I am happy to add another layer to the movement. I am very very happy to be able to do this. I think in form and pattern people relate my work to De Stijl but as I was saying, I notice nowadays that my work is very much brought into that sphere and I am happy with it because it is giving me the opportunity to bring something extra in and if it was just a copy of De Stijl, I don’t think people would be interested in it. They would say ‘Oh your man is just copying Mondriaan or copying Doesburg’, but I am not copying them. I am presenting myself – I make something which is out of my perspective. And I notice there are relationships with De Stijl movement, but I am saying it is the other way around.

[DR] Yeah, we have been talking about this throughout this whole interview really and right at the end you’ve just summed it up really nicely. You’re adding another layer to the Western canon to represent the time which has passed, and there are, of course, parallels with De Stijl, but it’s you and it’s about your history. 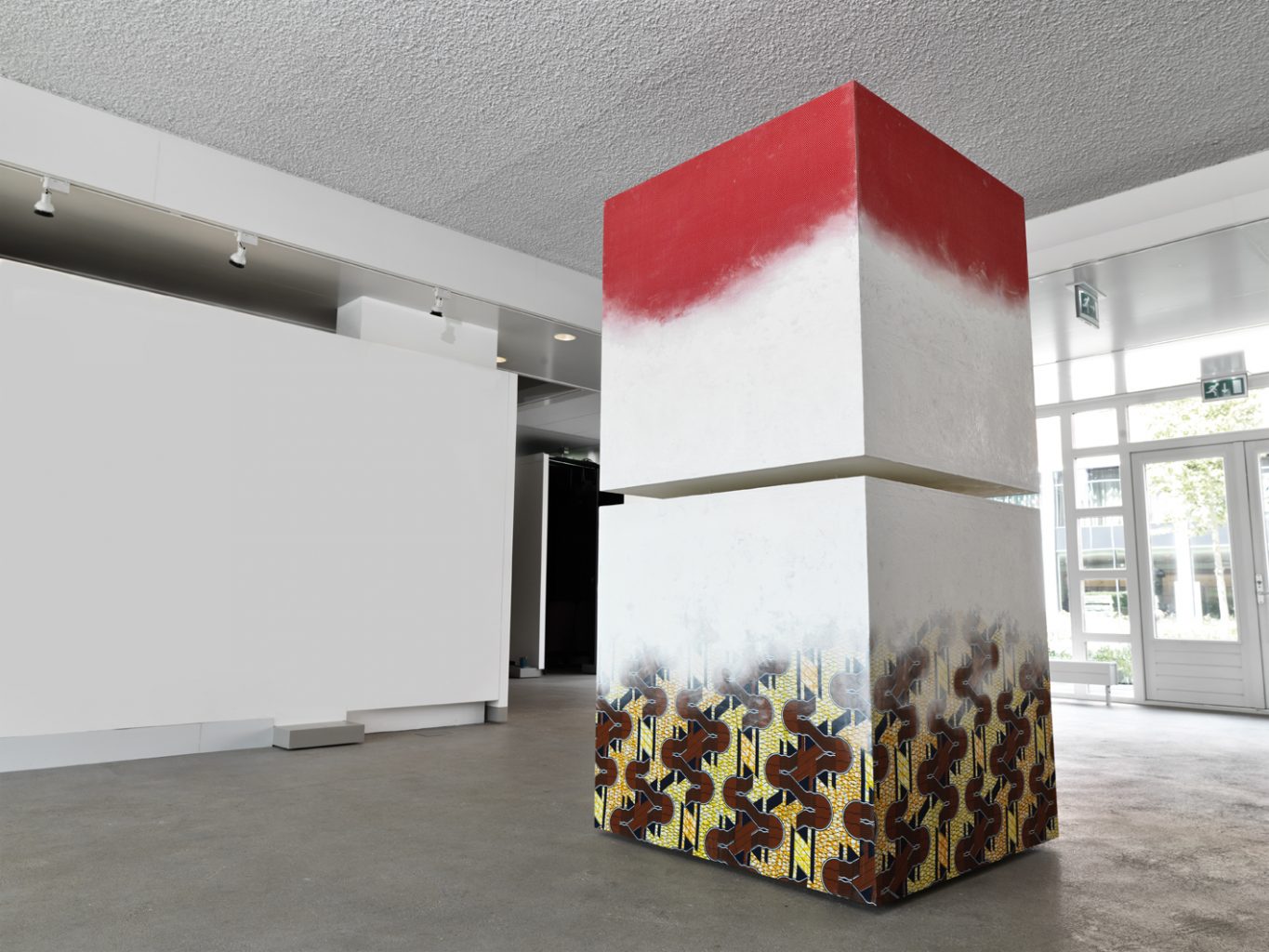 ‘Arrows shot from the Bow’ by Suns and Stars Exhibitions, opens on 10th of April 2016 and runs until the 22nd of May at Rietveld’s ‘Huis Cordemeyer’ in Apeldoorn.

You can find more information at sunsandstars.nl/exhibitions

Previous article
The Combination Penalty: A Tribute from Barça to Johan Cruijff
Next article
Why February in the Netherlands sucks

Adjust your travel plans! Another train strike will soon be taking place in the Netherlands — this time by the...

Adjust your travel plans! Another train strike will soon be taking place in the Netherlands — this time by the staff of Arriva, the...

A Christmas Carol: Seasonal festivities through dance in the Hague (in English!)

The cosy warmth of a feel-good Christmas story, the magical twinkle of fairy lights, and the festive melodies of seasonal jingles are just a...