Let me start this open letter with an apology.

Really, I’m in no position to question the words of a man who has shocked & awed the entire world with such knock-down phrases as “Doe zelf eens normaal, man!” Even more impressive was your eloquent philosophy on the matter that is Zwarte Piet, a discussion which you so cleverly ended once and for all by stating: “yes, he’s black, can’t change that, can I?”

So with that out of the way, I want to raise a few words on your performance at the VVD conference last week. It was on that Friday that you held a speech to… raise awareness? Win support? Not sure what it was, but somewhere between the endless clichés about the decay of good old fashioned values and the rise of egoistic individualism, you dropped the following eye-brow raising gem. Here it is, word for word:

Translation: “Becoming unemployed. [It’s] horrible when it happens. But how many of those who lose their job immediately have the address of the UWV with them to get welfare? I don’t get it.”

As a politician, you are surely aware of the art that is rhetorics, or rather: the art of making persuasive speeches. You, of all people, should know that there are two phrases which will kill your charisma dead if you use them incorrectly. They are:

The word “But…” is actually quite a useful one when it is used by assholes, because it’s a reminder to the non-asshole listener that no, he did not sincerely mean the sentence he said before the word ‘but’.” We all know to stop listening when a person says “I’m not a racist, but…”, don’t we? Yes, it’s so horrible when someone loses their job. I’m sure that a person who earns € 144,000 a year can relate to the terror of losing your only means of paying the rent by the end of the month.

That last sentence, however, is really the icing on the cake that is your trainwreck of a speech. “I don’t get it.” You used that phrase like it was a punch-line. “Look at all these silly plebs doing this thing. I don’t get it!” For a moment, I thought you were gonna drop the mic and exit the stage on a cloud of a self-righteous sense of victory.

Maybe, mister Rutte, this instant of “I don’t get it” is a sign that there’s something lacking in your understanding, like the experience of losing your job. Believe me when I say this: suddenly losing your only source of income is a scary feeling. So yes, people will instantly contact the UWV and get that welfare check.
When you work, you pay taxes; when you lose your job, you get money from the state to help you out until you find a new job. You can scold people when they don’t work hard enough to get a new job, but you can’t lecture them for asking for what is their lawful right.

For a moment I wasn’t sure if I had understood you correctly, and that’s when you said this:

Translation: “When that happens in your environment, I think it’s okay for you to adjust a person and say: “Y’know, that welfare, if it really doesn’t work out, it’ll be there. But first let’s just see if you can continue working. Let’s just take care of that.”

If I were to write a story about a character who is a stereotypical sleaze politician who is as arrogant as he is naive, I would still ditch this line for being too corny. “These unemployed people, right? Why don’t they, I dunno… get a job?” No ****, Sherlock. Getting a job isn’t your solution when you’re unemployed, it’s your problem. It’s a tough problem to face and it takes a lot of hard work, luck, and most likely a lot of time to solve.
Here’s a simple math exercise for you to wrap your head around: right now, the amount of people looking for a job outnumber the available jobs at a rate of roughly five to one (sources here and here). So between being jobless and being that one persons out of the hundreds who applied for the same position, you’re going to need financial help.

By the way, when you said that you don’t get why some unemployed people immediately contact the UWV, you might want to know that they are obliged by law to do this within a week of losing their job.

Mister Rutte, please consider these things next time you get in front of a camera and give the Dutch society a verbal slap on the fingers.

Oh yeah, and one more thing… 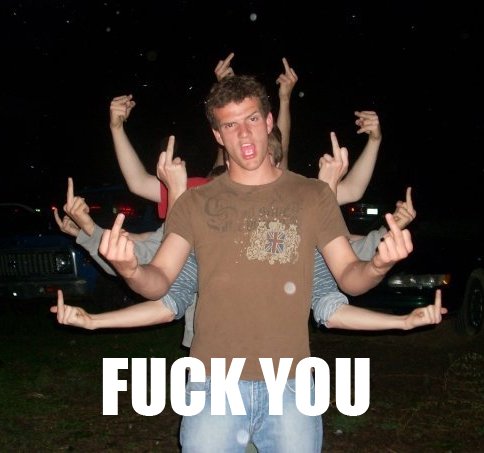 Your defender of decent and diligent values,

Previous articleWillem Holleeder Is In Control Behind Bars
Next article‘Dutch Pride’: Dutch football women on top of the world in Canada