Legendary. Miracle. Unbelievable. Superlatives went short yesterday as the Dutch formula 1 driver Max Verstappen wrote Dutch sports history and won the Grand Prix of Catalunya. He was the youngest driver and the first Dutchie ever to win a race in the King class of car sports. In an astonishing race he left the two Ferrari’s and his Red Bull team mate behind him, soaking up the pressure of Kimi Raikkonen for more than 30 laps, but somehow he kept a cool head and let many tears of grown up Dutch men flow in what seems to be one of the biggest sporting achievements of all time. Let’s review this historical race and talk you through three key moments in Max journey towards victory.

With Max starting at a 4th place it wasn’t very logical that he would win it. Certainly because there were two Mercedes in front of him, that have normally quicker cars, and it was his first race ever in a Red Bull car. People were saying things like ‘he’s just 18’, ‘it takes time to get used to the car and the team’, ‘he’ll  have to cope with more pressure than before’ etc., but none of these things applied to a natural talent like Max, and the first lap was a good example of that. His start wasn’t even very good as he was overtaken by Vettel’s Ferrari. Max didn’t take unnecessary risks to get his position back asap. He kept calm in all the chaos of the start, just waited a bit and one turn later he overtook Vettel as if none of the previous had happened and as if it was self-evident for Max that he would pass the four times world champion. In the meantime, a little bit of luck was at Max side as the two Mercedes decided to knock each other out of the race as Hamilton and Rosberg crashed together in an unbelievable move from both of them. In retrospect, that was the start of a Leicester-like miracle that was about to happen. 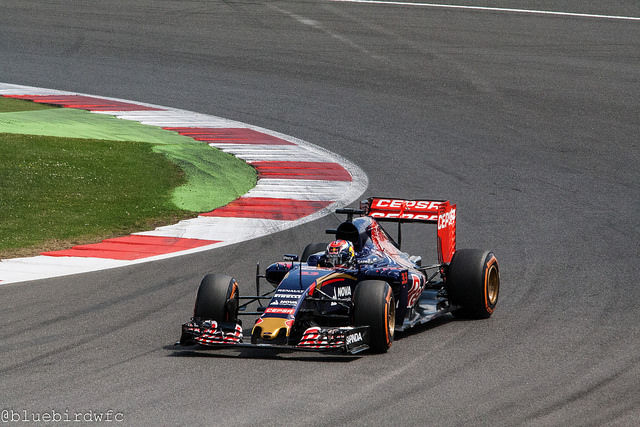 Max’ team mate Ricciardo was leading the race then, and it was a big question if and how Verstappen could overtake him. Luckily for him he was on the right side of the stop strategy of Red Bull, when they went for the more aggressive three stops for Ricciardo and a more conservative two stops for Max. In the end the last one seemed to be the best. With more than 30 laps to go, Verstappen drove for the second time to the pit to switch the tires, but of course it wasn’t easy peasy from that point. For the fans it was all but clear-cut, because they didn’t know he was only going to make two stops and there were still two very experienced Ferrari drivers with very quick cars behind him. But that was when his Messi-like talent for racing came around the corner as he was able to keep them of his back, only by driving the perfect race.

Formula One drivers certainly have to have a low pulse to stand some of the nerve-wrecking situations they get themselves in, but sometimes I doubt if Max has any pulse at all if you look at the way he kept his cool driving towards victory. With more than 30 laps to go, Max led the race, but there was also a very annoying ex-World Champion, Kimi Raikkonen, behind him in a Ferrari who was pushing very hard within one second, probably hoping that Max would make a mistake that could cost him the lead. The most dangerous for Max was the first curve, because Kimi could use his DRS (which gives him a higher top speed) at the end of a long straight line to overtake him in the first turn, but Max didn’t let that happen as he was racing within the finest of margins.

To make his DRS really work Kimi had to be within +0.500 seconds to get him in the right position to overtake Verstappen, but the exit of Max in the last turn before the long straight end was so magnificent, because it was there in every lap that he took a +0.100 or +0.200 extra cushion towards Kimi, so he couldn’t make his DRS effective. And then he also had to save his tires a bit to avoid the probability that he would blow them (as Ricciardo did) or be so dodgy that he couldn’t drive any faster than my granny with her walker. Any fault with the breaks, with the tires, with anything would have cost him the victory, but the maturity with which he coped with all that pressure at the age of 18, was so remarkable. There he was, in the last turn in the last lap of the race with Kimi still right behind him. Now he wouldn’t give it away, driving towards the finish flag, his team was going mad at the wall, Max pumping his fist in the air, his first formula one win ever. The first Dutchie and youngest driver ever to win a Formula One-race driving towards a legendary future.

Here you could watch the highlights of the race

Previous articleIn the Garden of Europe: Keukenhof
Next articleTips for Home Buying in the Netherlands and UK