Cycling in the Netherlands: 3 Reasons Why You Should Experience The Amstel Gold Race

The Amstel Gold Race is the only professional cycling race in the Netherlands that’s considered to be one of the classics. It starts at the Grote Markt in Maastricht and ends 1.8 kilometer behind the famous Dutch mountain, the Cauberg. The 51st edition of this unique race takes place this weekend in the province of Limburg, the only Dutch province that isn’t as flat as a pancake, and I’m going to tell you what makes the Amstel Gold so unique and so Dutch and why you should watch, join or cycle it. 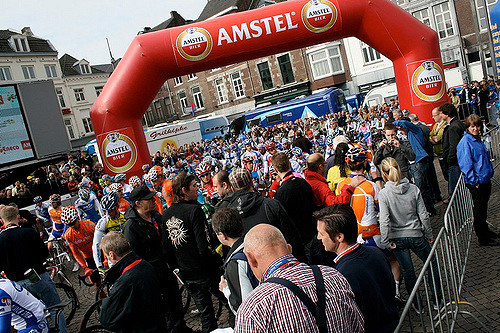 Scenes at the start of the Amstel Gold Race

The race course of the Amstel Gold is considered to be as Dutch as for example: the cheese (but the cheese culture in France is far more extensive), the wooden shoes (which no one wears anymore), the tulips (that originally came from Turkey) and the marihuana (which is only semi-legal). That means that it’s small, it’s full of obstacles and you have to twist and turn all the time. That’s why some cycling commentators and experts think that the Netherlands is not suited for organizing a classic cycling race and many South-American and South-European professional cyclists avoid this race, because they are not familiar with such courses and consider the track far too risky.

In every street and around every corner you have to be at your uttermost alert. There are narrowing roads marked by planters, there are unexpected bollards in the middle of the road and there are speed humps all over the place. That’s what makes it so freaking dangerous and nervy for the riders and so freaking spectacular for the viewers. In the blink of an eye, your favorite can lay on the ground with a broken collar bone even though he was looking far stronger than the rest of the favorites a few seconds earlier. And now he’s out, because he had an unexpected speed date with the Dutch traffic device: ‘Later, gast’!, as we say in Dutch.

2)It’s sponsored by a beer brand!

The Amstel Gold is the only classic professional cycling race that contains the name of a famous Dutch beer brand: Amstel. I mean, most of the races are originally sponsored by newspapers ( for example: Tour de France, Giro d’Italia, Omloop Het Nieuwsblad to name a few) How lame is that and how cool is it that our Dutch race name implies that people are getting drunk in a race! It’s actually not, obviously, but the implication is definitely cool. The reason for that coolness is that the founder of the race Herman Krott owned an amateur cycling team, Amstel Bier, in the 60’s that was one of the best teams in the world. Amstel asked him to set this team up to compete with Heineken and they thought that if they got involved in sports sponsorship they would edge it over their great rival on the international beer market. In the following decennia the team was successful and ‘produced’ world-famous Dutch riders like Peter Post, Joop Zoetemelk, Hennie Kuiper, Gerrie Knetemann, Gert-Jan Theunisse, Jacques Hanegraaf, Teun van Vliet, Adri van Houwelingen, Leo van Vliet, Fedor den Hertog and others. But Krott also had another dream. He wanted to organize a classic one day cycling race in the Netherlands that could be as famous as races like the Ronde van Vlaanderen and Milan- San Remo. He got the thumbs up for this idea from Amstel and that’s how the Amstel Gold Race came into being. 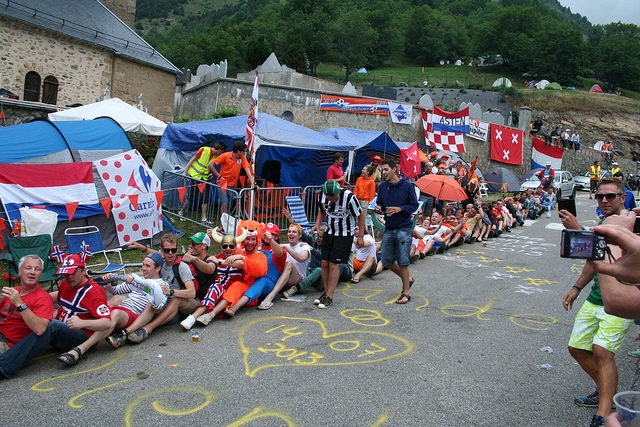 And that’s why thousands of cycling fans go to Limburg each year to binge drink Amstel beer and turn this unique cycling event into a typical Dutch party. And who doesn’t love a party: Because there ain’t no party like an alcoholic party! Even the riders take part in it. How cramazing (that’s crazy and amazing in one) is that!

Advertisement in which Dutch cyclist Laurens Ten Dam is drinking Amstel Radler 0.0% during the race

As I said earlier, this race takes place in the most untypical Dutch landscape, Limburg. It’s not as flat as the rest of the Netherlands and they even have hills that doesn’t look like the Alps, but at least they’re trying. Most of the Limburg hills will be climbed during the Amstel Gold and there are some leg breakers in between. The most steep climb of the race is the Keutenberg, which is officially named the steepest climb in Holland with parts up to 22%. Holy mother of God! That sounds a bit like the Mûr de Huy in Belgium, which I climbed last year. Such climbs are motherf*ckers I can assure you and I think that everyone who reaches the top of such climb alive, without walking, is a real hero. They even advice normal cyclists at the Keutenberg to walk to the top, because they consider it to be too dangerous for untrained people. The chances that you get a heart attack or a vivid theophany are probably about 99,5 percent. Holy crap, what a spectacle you’ll get on such a climb. Can’t wait to see it!

Dutch cyclist Lars Boom at the head of the race at the Cauberg, 2010

Even though it’s not as steep and spectacular as the Keutenberg, the Cauberg is one of the most famous of the climbs of the Amstel Gold Race. That’s because it’s in the final of the race and in the last corner before they turn to the Cauberg there are humongous amounts of fans, which give every cyclist the feeling that they are worshipped, a welcome boost for someone who already drove more than 200 kilometers and feels more dead than alive. It’s goosebumps up there, I can tell you that. And from the top of the Cauberg it’s only just a 1.8 kilometer sprint towards eternal Dutch glory. Be there, feel it, see it. Such spectacle, so Dutch and un-Dutch in one and the atmosphere will be great. Who wouldn’t want to be involved. I expect to see all of you there. Because there ain’t no Dutch party, like an Amstel Gold Race party!

Previous articleSummerjazz Festival Leiden: bring on the best of jazz in Leiden
Next articleLaughing with Hitler, laughing at Erdoğan