Rich in history, Vesting Bourtange dates back to 1580 when Willem van Oranje ordered an entrenchment be built with five bastions near the Dutch-German border. Build on a sandy ridge or ‘tange’ (in Dutch) it was completed in 1593. Over the centuries it was continually reinforced but as over time it eventually lost its military status and was dismantled by 1851. Since then it has grown into an agricultural village which is teeming with history.

Bourtange is located southeast of Groningen, not far from the German border, making it a fun day trip if you’re in the area. Its cobblestone roads, historic canons and wooden drawbridges allow your imagination to wander back in time.

A few weeks ago, while the kids had a day off from school, we decided to take a trip up and spend the day soaking up some history. 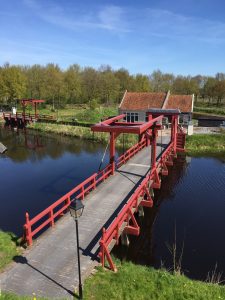 I automatically assumed the kids would be complaining of boredom from the minute we got there until the minute we left, but surprisingly they loved it! We spend our time walking around the high ridges that line the town, a water canal on one side and the town in the center. Stunning views and fields as far as the eye could see made us feel as if we really were protected from the rest of the world.

Along with museums, Bourtange also has a Inn which would allow you to actually stay overnight and enjoy the fortress for a little bit longer. We made sure to visit the candle maker and also enjoyed watching the residents having their breakfast in their gardens. We eventually made our way to the center square where there were several restaurants available. I do suggest finding a table early as by the time we had finished eating it was already full and many were waiting for a table to come available. 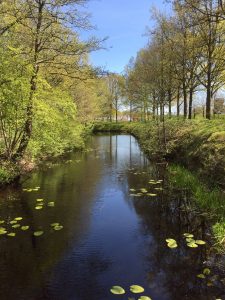 The food was typical Dutch fare, not too amazing but it filled the tummies and gave us enough energy to start another round of exploring. The tour continued with the church and windmill and then a little relax time watching the swans go by. By the afternoon the crowds began to get bigger and we were happy we had gotten to Bourtange early, allowing us a much more pleasant time.

The video makes it look massive, but in all reality it was quite a bit smaller than we expected. Regardless it was a beautiful place to visit and a great way to expose children to history. No theme parks, no rides, just exploring and wandering the streets of this century’s old fortress. I highly recommend Bourtange for your next family outing.