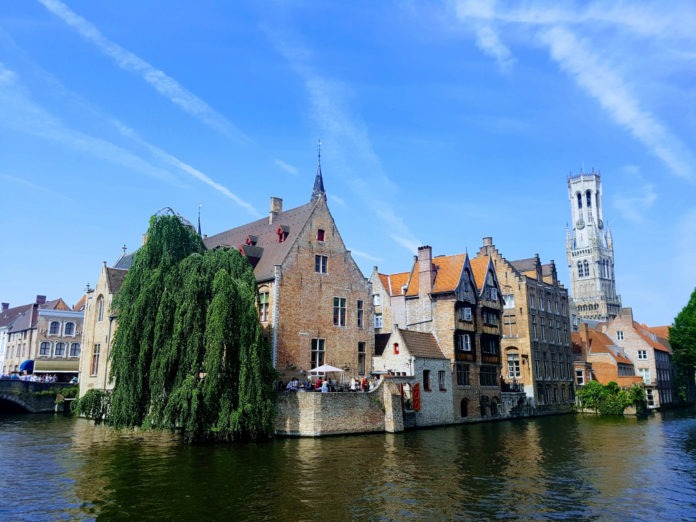 What’s this now? Something non-Dutch on DutchReview? If there’s one thing that the Netherlands is perfectly suited for it’s doing perfect getaways to our friendly chummy neighbor to the South: the fair Belgium! It only takes a few hours by train or car, sometimes even shorter – the beer tastes better and the accents are less frightful. So we went off our superior Dutch roads to them Belgium ones and visited the most scenic Belgium town for this first edition of ‘DutchReview tripping’. 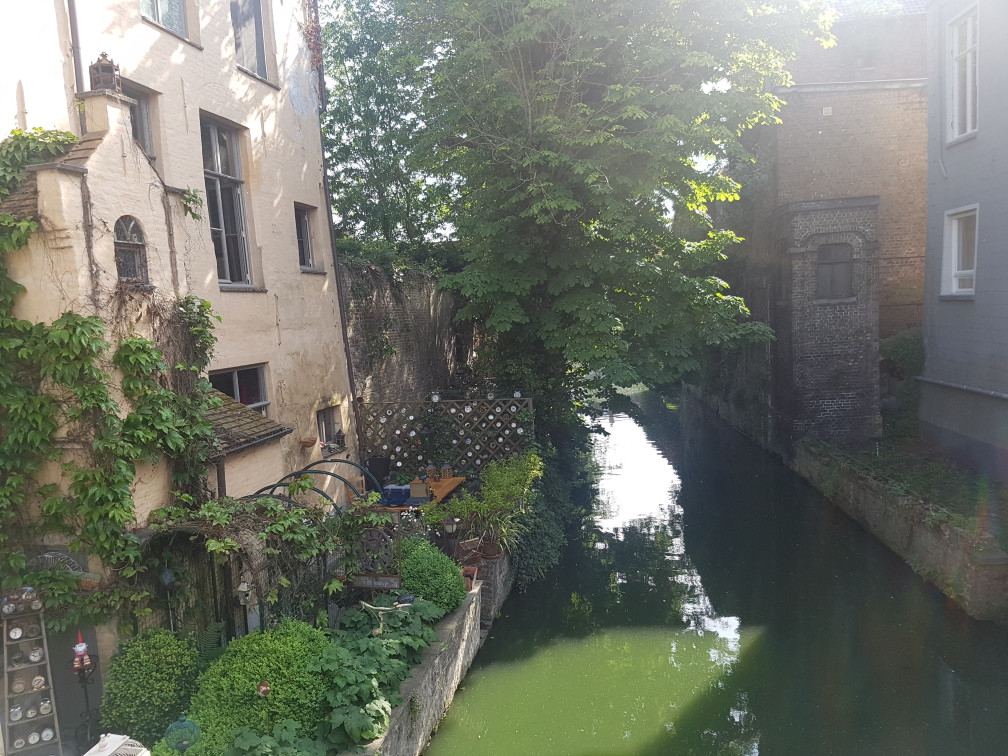 What’s there to see in Brugge?

Before we talk about the nice night we had right in the center at Martin’s Brugge, or the exquisite food at Komtuveu – let’s first talk a little bit about good ol’sightseeing in Brugge.

Brugge, or Bruges in English (but we’re sticking to Brugge in this article), is the best fairytale medieval town you’ll see in North-West Europe in my opinion. It has all the hallmarks of one such as cobbled roads, little houses that are cute (and look a bit on the verge of collapsing) and historic market squares. The city as a whole feels like an open air museum (and the busloads if tourists will add to that feeling.) but it’s totally understandable since the little city is drop dead gorgeous. So if you are day- or weekendtripping Brugge from the Netherlands then here are the prime spots you don’t want to miss.

We liked this square actually a bit better than the adjacent and bigger Markt square. The palace here was the seat of the Count of Flanders for a long time and actually, all the buildings there look like palaces. 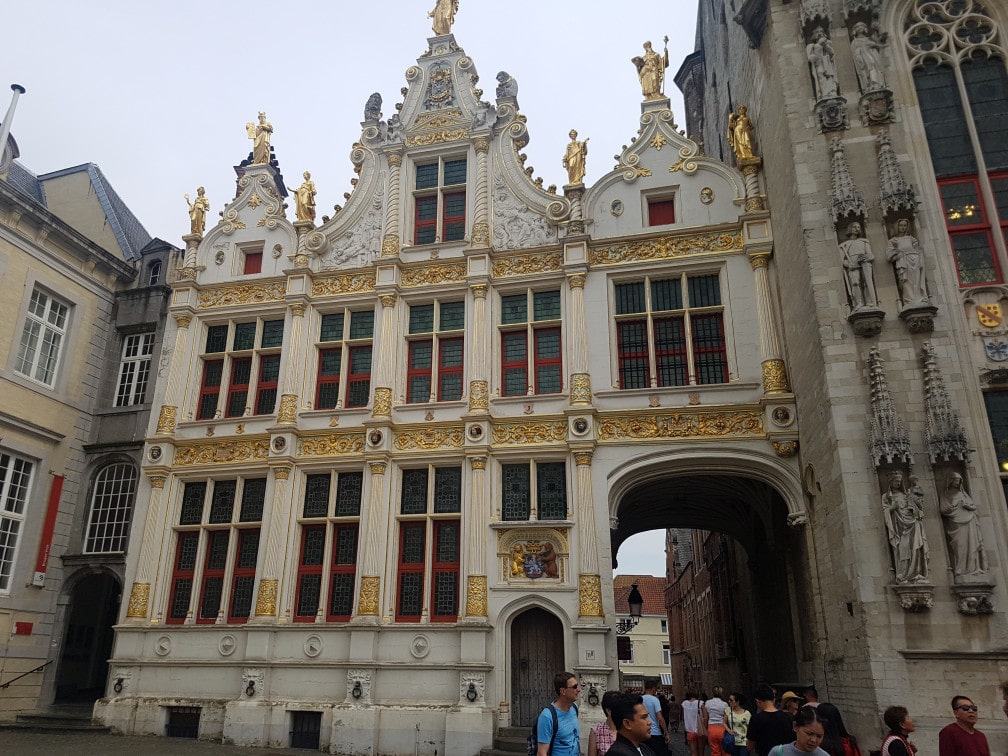 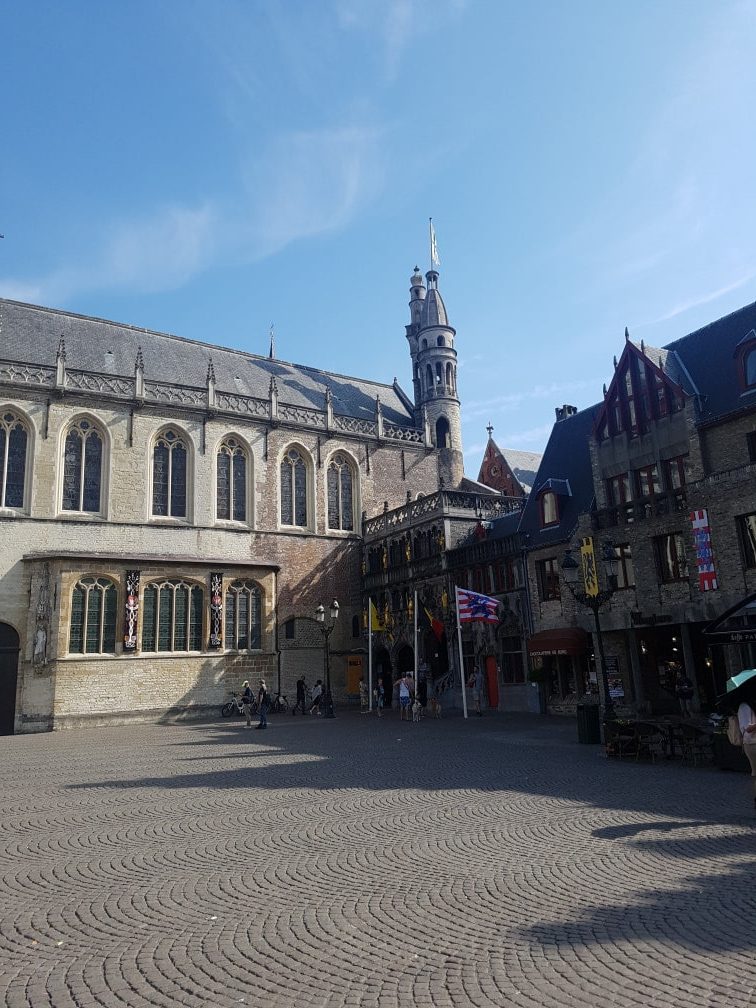 This one little building shown here even outshines the rest of the buildings.

Want to see Christ’s blood? Sure you do! The Heilig-Bloedbasiliek is a small basilica which is supposedly home to some of Christ’s blood. For this obvious reason, there are thousands of visitors visiting the basilica every year. The phial with his blood is displayed in a decorative tabernacle and is brought out for viewing at 2pm. Even if you’re not into this whole thing the building and decorations by itself are really beautiful and elaborate. 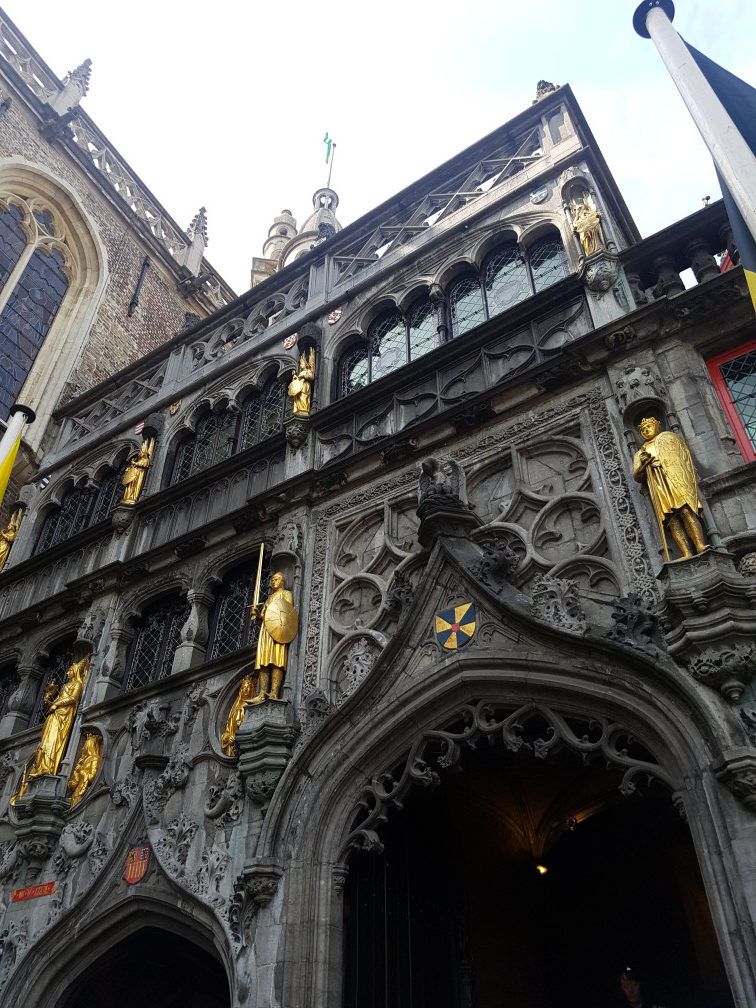 Well, it’s not an actual full-time fish market anymore – but this colonnaded square is still used by salesmen this day. It’s just one of those beautiful places in Brugge that just takes you back into time. 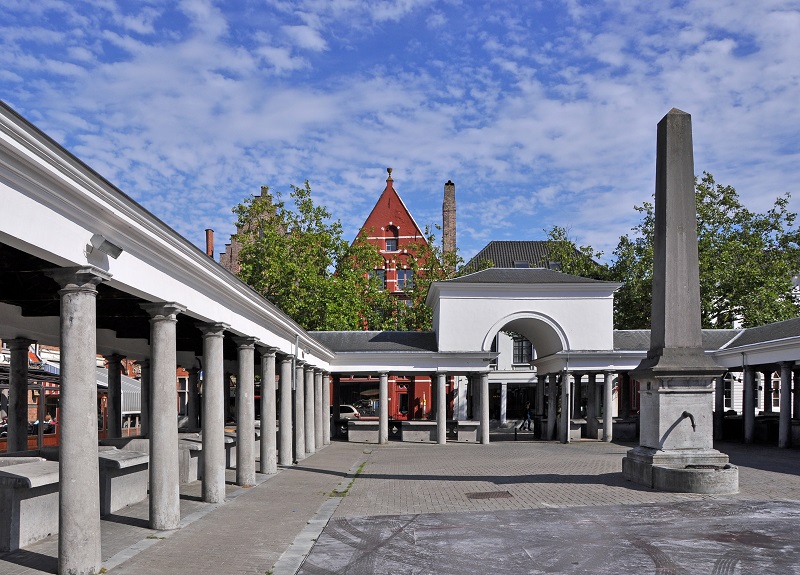 The biggest square of Brugge is of course well worthy of a visit and it’s more or less the center of the town. Sure there are loads of tourists present, but you’ll understand once you see the sheer number of magnificent buildings. We stayed the night at Martin’s Brugge, which is right next to both the Brugge Markt as the Burg square. 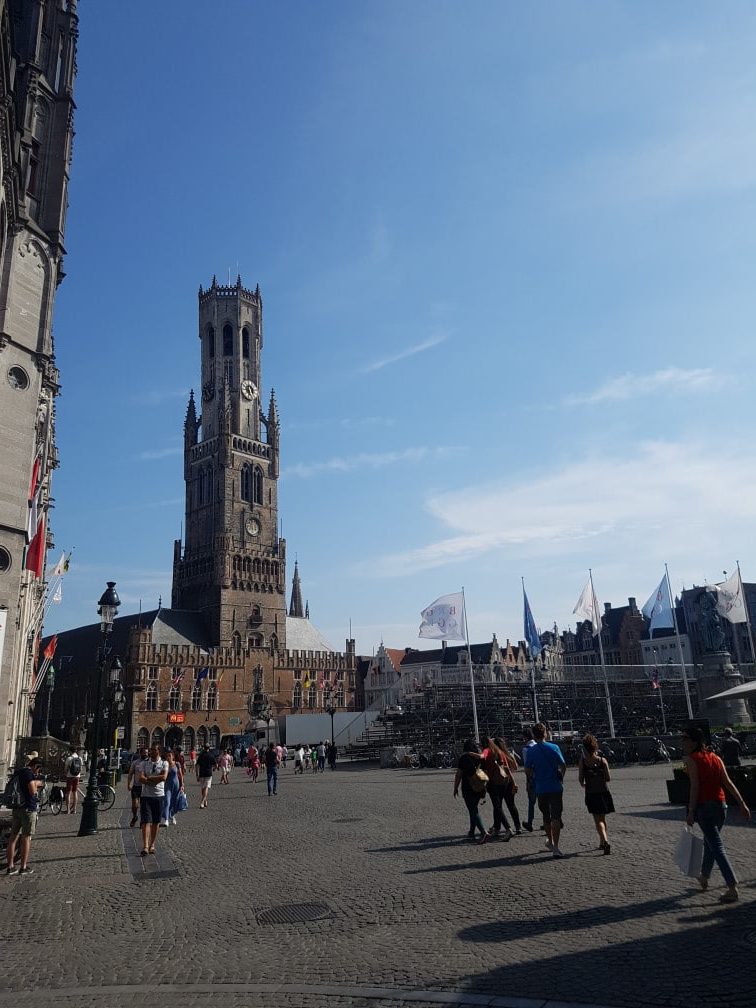 The most notable of all is the Belfort building which stands tall at 83 metres and which is totally open for your climbing and subsequent lovely pictures of Brugge. 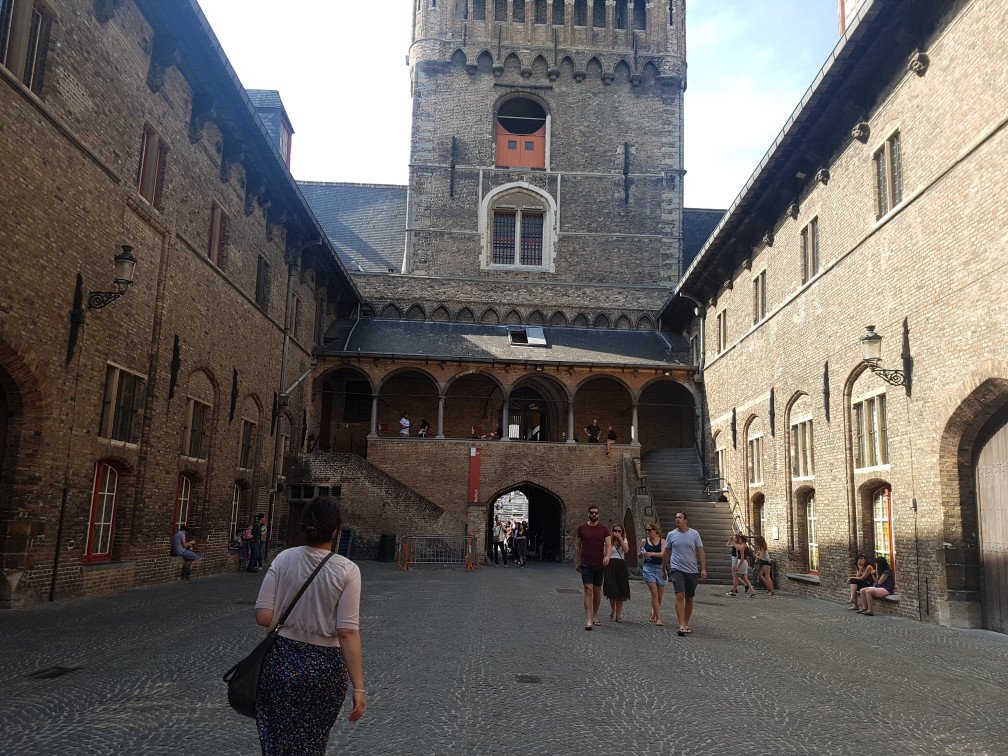 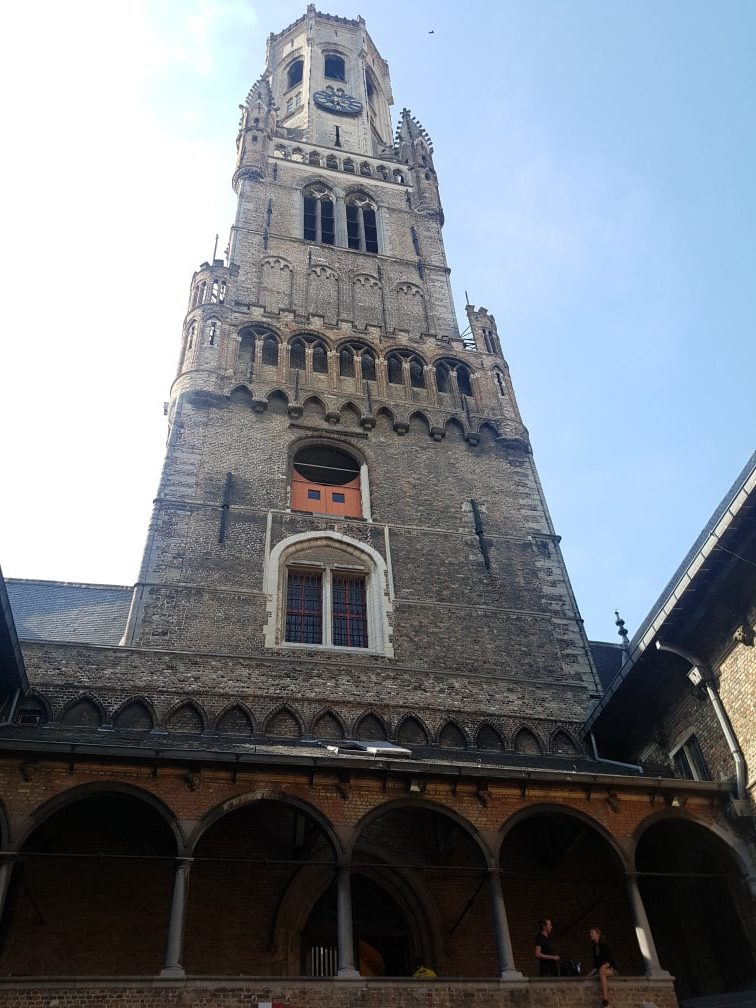 Normally the hospital isn’t the place you want to go, but this isn’t your ordinary hospital. This ‘Sint-Janshospitaal’ is a restored 12th-century hospital complete with timber roof beams and art masterpieces dating back to the 15th Century.

Just sitting there at its tranquil courtyard will make you feel like you’re in the middle ages yourself, or well – the set of Game of Thrones since that is the closest thing you’ve seen of the actual middle ages.

These are the sights you definitely don’t want to miss, but I wholeheartedly recommend just walking about town (or biking, that looked even more relaxing!) and taking in the atmosphere.

And of course, for full immersion in said atmosphere, it’s best to stay smack in the center of the town. So we stayed at:

Where to sleep in Brugge: Martin’s Brugge!

Next up, where to spend the night in Brugge? We strongly recommend spending at least one night in town since it’s quite the drive from the Netherlands and the town is so scenic at night as well. We were looking for something in the city center (you don’t want to stay in the outskirts of Brugge) which also allowed you to park. And of course, being Dutch means that getting a good price on it certainly weighs in.

We opted for Martin’s Brugge! Not only is this small chain of nice Belgian hotels always a sure hit when it comes to nice and tidy rooms and great service, they were also right in the center of Brugge and had ample parking space (that’s a factor for Brugge as well!). Since it’s pretty necessary to take the car to Brugge, this was a sure winner!

This was the view from our room! <3

Besides the drop dead gorgeous view Martin’s Brugge also excelled in two other aspects. First off their service was really nice and modern, with an unexpected highlight being their well thought out map of Brugge – that one really came in handy those days!

A good hotel breakfast is always an extra feature of the trip, but Martin’s buffet was extraordinary when it came to choice and freshness! We loved it!

No pictures of the parking garage, but you’ll just have to trust me on that one 😉 Oh, and the garage was right next to the hotel – so no ‘there’s parking but you have to walk 2km to the hotel-jokes’. All in all this made Martin’s Brugge a solid choice for a trip to Brugge!

Oh, and there’s of course and that delicious Belgium food and beer. Speaking about that…

What to eat in Brugge?

‘Pattatten’ and some fine Belgium chocolate are probably on everybody’s list. But Brugge is high on tourist traps and we both found that all that traditional stuff was lacking a bit in the quality-cost ratio department. We did visit one little gem though! 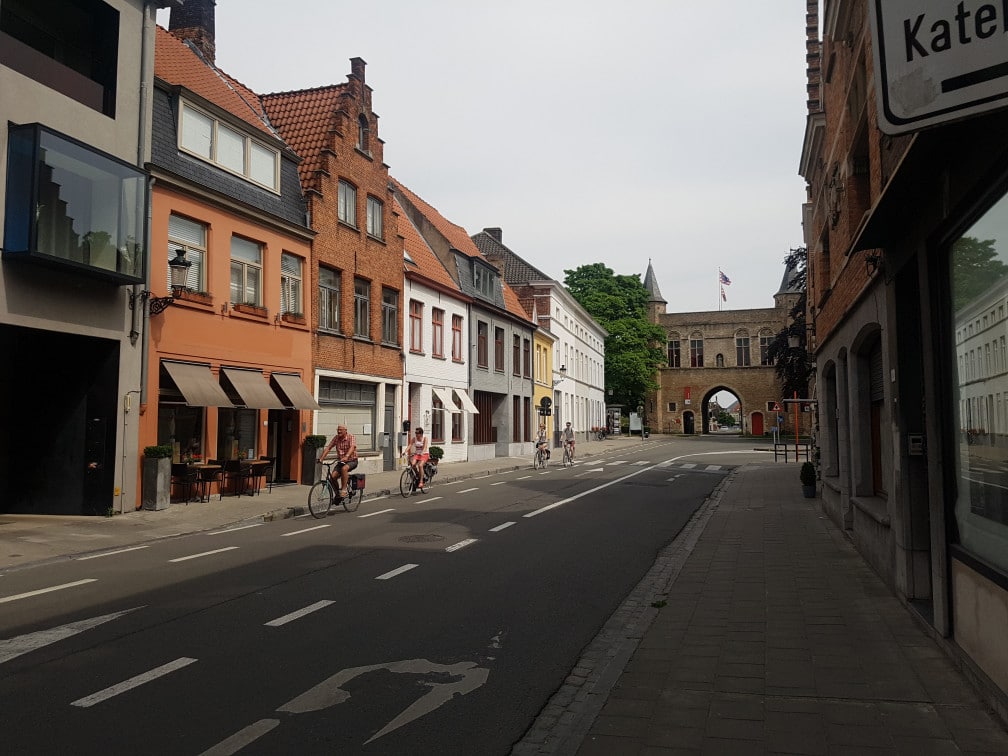 Just a bit off the beaten path was Komtuveu. A young and charming couple (she does the serving, he the cooking) runs this exquisite little restaurant which serves more or less everything in a bowl (in Dutch a ‘kom’). The place has some refreshing décor, an idyllic little terrace and best of all the food is great. If you’re thinking that a place which serves it’s food in bowls is a bit shabby then you’re in for a treat.

We went for a fishy menu and we’re amazed by the creative and original flavours that found their way to our mouth. As usual, pictures can tell a better tale than text: 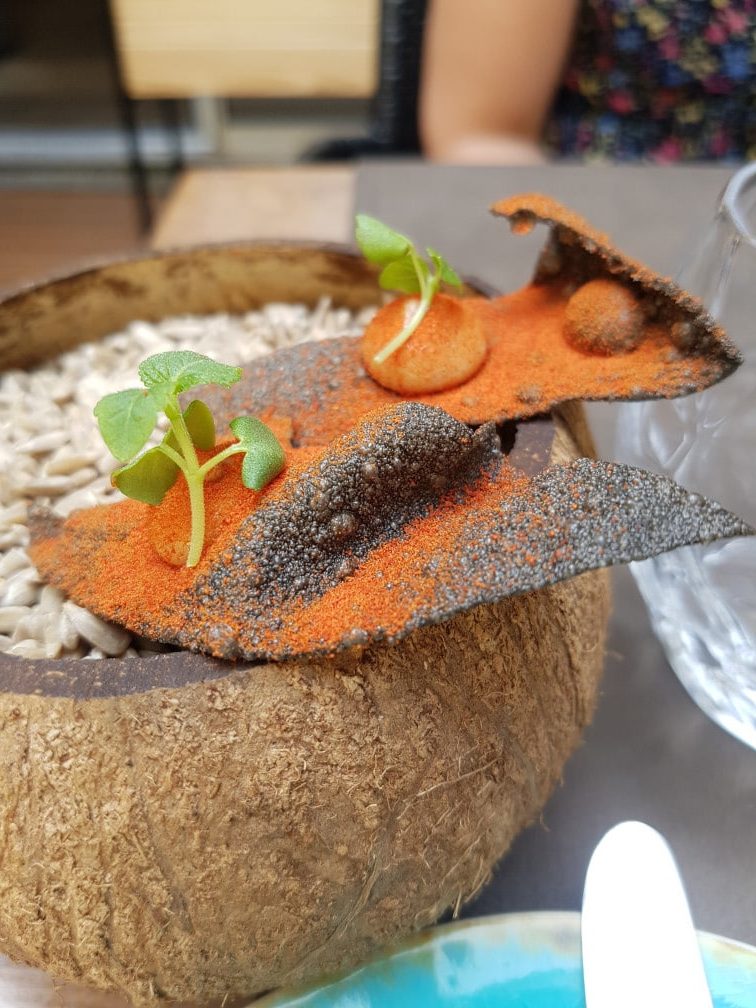 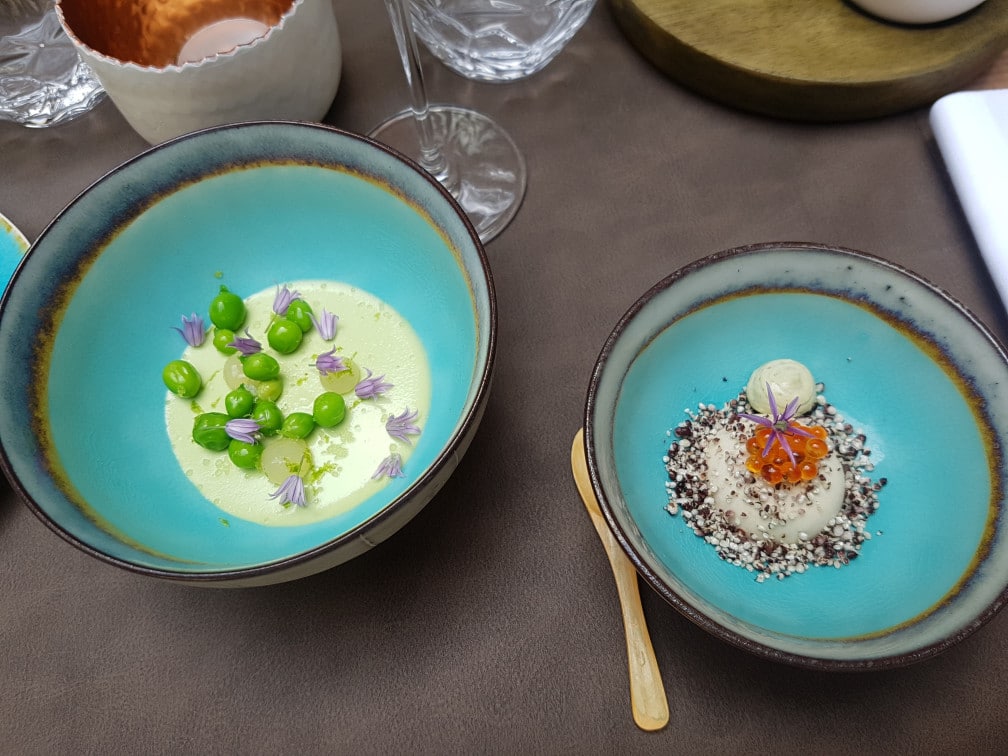 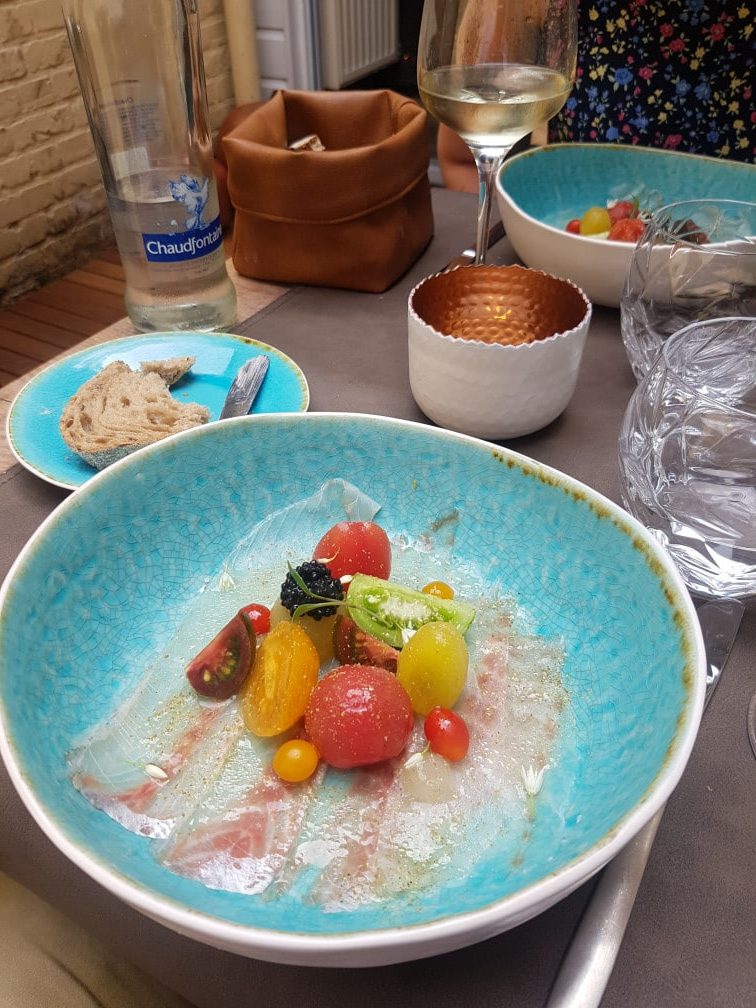 Furthermore, if there is one tip I can give you is just go along with their suggestions for wine. We found that the pairing with the special food was done perfectly, still thinking about this one: 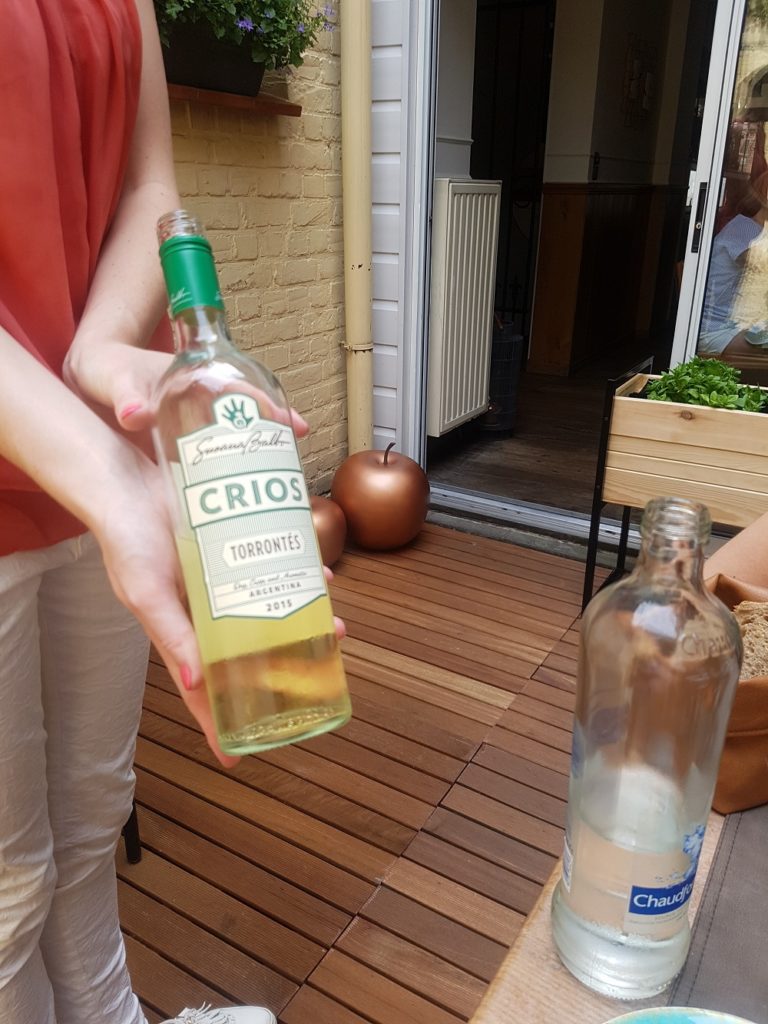 Of course, the only thing better than text&pics is actually tasting it yourself, so if you want a unique and special lunch or dinner here are the details.

Now since it’s not in the good old Netherlands, how does one get to Brugge?

How to get to Brugge

So sounds like the perfect trip right? Well, except for one thing – although just looking at a map one might think Brugge is really close by the Dutch border – getting there is somewhat more difficult.

Going to Brugge from the Netherlands by car

Usually, it takes 2,5 hours to reach Brugge by car from the Randstad. There are 2 things slowing you down when you want to go to this way. First of all, a straight line would run through Zeeland – but roads don’t run through Zeeland easily with all the water there. So google maps usually sends you by Rotterdam (slow) and then Antwerpen.

And that’s the second delaying element – there’s the infamous ‘ring’ of Antwerpen, it’s a bit better the last years but it is still a place where traffic grinds to a halt. Nearly all routes take you through this chokepoint. The alternative offered is a toll-tunnel, which costs 6 euro’s and only offers like a 10 minute improvement. But this could be the way to go if you’re driving near peak hours.

Going to Brugge from the Netherlands by Train

Normally we are huge fans of taking the train. This time not so much, it is do-able, but just look at this 5-hour journey.

All in all, great trip for the weekend! What are the other places just across the border that you need to visit when living in the Netherlands? Feel free to tip us!

Previous articleWar of the Bitterballen heats up in Utrecht
Next articleTijn, little kid – big time hero, has passed away

Say what? The Dutch are getting shorter!

Arriving in the Netherlands as an international can feel as if you've touched down in a land of giants 🏰...