Boy, do we Dutchies love ourselves some freedom of speech! So proud are we of the fact that there once was a time when some of the greatest minds of Europe flocked to the Dutch Republic so that they could write such outlandish things as the notion that God may not even exist and that Catholics have smelly farts.

Flash forward to the 21st century, when self-proclaimed rapper Hozny Al-Asadi releases a video where it looks like PVV politician Geert Wilders is at the receiving end of a bullet flying at the speed of sound. Watch it here if you want to feel self-righteously offended.

Being the sober, down-to-Earth people that we are, it was all over the news and angered voices were heard all around while law suits were set up. So no surprise that Hozny was recently given the opportunity to speak his mind at Paauw (i.e.: the Dutch equivalence of Fox News). At the beginning of the video, you can waste several minutes of your life watching Hozny shift uncomfortably in his chair while he tries to avoid the painfully obvious fact that he made an artistic representation of Geert Wilders’ execution preceded by a four minute straight-from-the-heart rant about how much he dislikes Wilders.

When Hozny finally has no more choice other than to admit to his murder-fantasies, a discussion begins about whether or not Wilders deserves either insults or death threats. Not hindered by any sense of moderation, Hozny states that death threats “are to be expected” when you insult people’s religion.

Mind you that I’m not against free speech itself. In fact, I’m not even sure if I’m against an unmistakable representation of a person’s execution (though I would say that it is in bad taste). What I’m against is the cowardly attitude of people who hide behind the notion of “artistic expression” when they obviously express non-artistic opinions. What I mean is that you can’t just yell “HEIL HITLER!” at the top of your lungs and then pretend like you’re just practicing German grammar. Likewise, the supposed distinction between the art and the artist disappears when it’s obvious that your artistic expression is completely in line with your political and/or moral views.

It’s a matter of debate whether or not Hozny’s depiction of the execution of Geert Wilders is just a fantasy born from frustration (hey, haven’t we all fantasized about doing unspeakable things to school-bullies?) or a deep-rooted desire for the actual death of Wilders. I can actually sympathize with his frustration, because Muslims and Moroccans in The Netherlands suffer every day because of the wide-spread prejudices against them. Nonetheless, I don’t think Hozny’s rap rant and mock execution is very helpful in the on-going debate about tolerance and free speech. 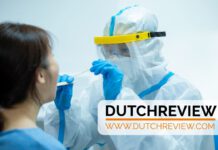 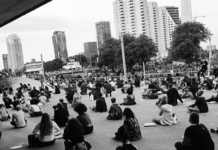 Rotterdam protest shut down early as 1.5m rule not observed