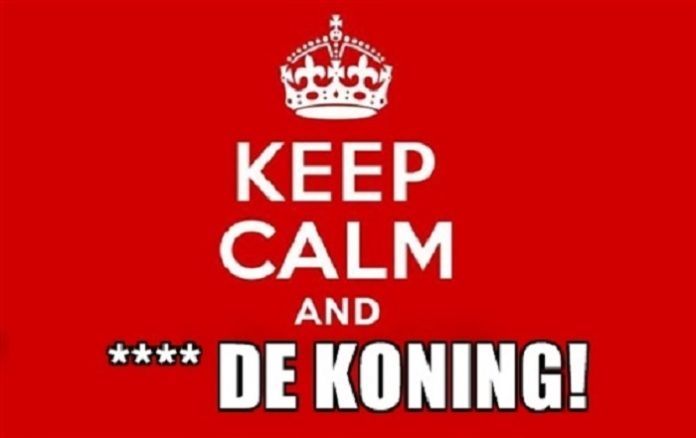 Here’s a good way to measure how free a society is: when and how is it appropriate to yell things like “Fuck de koning!”? (“Fuck the King!”). The Dutch are currently in the process of getting a decent answer to this burning question, as a seemingly small incident is currently snow-balling its way into madness.

So what happened? Last November, a man by the name of Al-Jaberi was arrested for yelling the phrase “Fuck de koning, fuck de koningin, fuck het koningshuis!” during a demonstration against Zwarte Piet. Please don’t ask us to explain that last sentence any further, it’s just what happened. Also, it’s May and we’re already talking about Zwarte Piet again?

As a result, al-Jaberi was arrested and this sparked another discussion about the edges of free speech. Some people defended these words under the right to protest and the right to free speech. At the same time, there were people who thought it was needlessly offensive, and were also considering the fact that yelling inflammatory words while standing in front of a crowd can indeed be illegal (for example: yelling “Bomb!” while on a plane is not exactly covered in free speech). Other people were just confused, because seriously, what the hell does this have to do with Zwarte Piet?

Fast forward to last Wednesday, May 6th, when the Openbaar Ministerie (the Dutch Public Prosecution Service) decided that it will prosecute al-Jaberi. Under what is possibly the most laughable article in Duch criminal law, deliberately offending the King is punishable by up to five years(!) in prison. The debate grows, and the phrase “Fuck de koning!” is trending on Twitter.

Fast forward again to the night of May 6th on May 7th, when someone sprayed the phrase “Fuck de koning!” onto the very walls of the royal palace in Amsterdam. Talk about things escalating quickly. As of this moment, the identity of the vandal is unknown.

By the way, all this offensive speech directed at the royal family, doesn’t it all seem a bit too familiar…?

* WARNING: offensive speech directed at the royal family below, starting at 4:03 *

For those who don’t know: Hans Teeuwen is a famous Dutch comedian slash jazz singer who is known for his surrealistic and sometimes controversial one-man shows. In the above video (again, Not Suitable For Work), he is performing a rather uncomfortable to watch sketch about him having sex with Queen Beatrix. Though the phrase “Majesteit, ga eens bier halen!” (tr.: “Majesty, get me a beer!”) had its fifteen minutes of fame as a catch-phrase, Teeuwen was heavily criticized for this piece of theater. Though it must be added here that none of that criticism came in the form of a possible jail sentence. 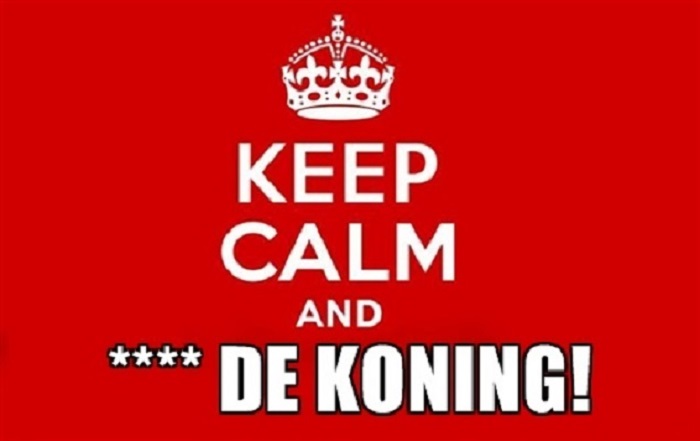 Interestingly enough, Teeuwen and Al-Jarebi are usually on the opposite side of the political spectrum. Teeuwen was a close friend of Theo van Gogh, with whom he shared his relentless support of free speech and sometimes both hilarious and spot-on defense of blasphemy. Al-Jarebi, on the other hand, wants to make a stand against racism, and is often seen at protests criticizing the Israeli occupation of Palestinian land and claiming that The Netherlands still has not fully acknowledged its history as slave traders.

The trial which will decide on the legal punishment of Al-Jaberi will start on May 27th. His lawyer has even asked that King Alexander and Queen Maxima will stand as witness and explain to the court if they feel personally offended by it. Maybe he should ask Hans Teeuwen as well, I’m sure he and Al-Jaberi will have a lot to talk about.

EDIT 08/05: Following the commotion around the trial against Al-Jaberi, the Openbaar Ministerie has decided that it will drop the charges for now.