There is something brewin’ in Holland and it’s not one of those nice winter appropriate stews we consider a national dish. Nope. The ballot is calling. A blue moon is upon us. A referendum is coming. And we are not the only ones, the Brits will have a go at it as well.

The referendum has been initiated by the team behind GeenStijl, the Dutch self proclaimed tendentious, unfounded and needlessly hurtful journalistic blog and cousin to Pownews. Back in September 2015 they made the rounds to organize a referendum under the title GeenPeil.

They needed 300.000 signatures in order to make the referendum a reality and they succeeded with a digitally innovative way to collect these signatures (with numbers currently around 450.000). The parliamentary gods gathered and stirred into the cauldron and * poef * April 6 will be the day. So now GeenStijl, The Hague and the media at large will try and motivate the Dutch people to cast their ballot.

But what are we voting on?

GeenStijl has little love for the European Union and has been one of it’s harshest and sharpest critics. They see the European States slowly transforming into the Mega Zord..

And in the control chamber of this mega zord there would be a lot less democratic control from the individual states, especially for the geeky kid of the class: Holland.

GeenStijl started searching for the next best moment for our parliament to pass a particular piece of EU legislation to attach the referendum to. And whadda you know: the Dutch parliament has to approve and sign the expansion of the European trade treaty with Ukraine.

So the literal vote will be on the trade treaty between the EU and Ukraine. People will get to vote yes or no. But on a more symbolic level this will be a vote for or against the expansion of the EU’s influence, power and control (in relation to its member states).

But what’s the problem with the EU?

Well, Holland has a bit of a problematic relationship with the EU. Ever since the first Euro coin got pressed Dutch prices have gone up.

Then came the moment in 2005 the Dutch (and the French) held a referendum on the European constitution. The Dutch gave a resounding NO to a European constitution. Still a remarkable similar piece of legislation (96%) was dubbed the treaty of Lissabon and passed regardless of the dutch (and the french) no vote. This created a dangerous precedent of the EU’s negligence for some.

And then the Greek financial crisis grabbed our headlines and the European union started interfering because of the €€€. Not only did that lead to our current prime ministers biggest broken campaign promise (not another dime will go to Greece was what he said). It also became apparent that the European union seemed unequipped to deal with this issue in a just and effective way (not to even go into how the banks have played the European Union and its taxpayers by providing Greece with loans with high interest rates Greece would never be able to pay back and hiding these prospects ). By basically forcing severe austerity measures unto Greece the European Union revealed its dark side.

The EU could override national politics and the country originating demos and cratos seemed to have become quite estranged from those very words. The Greeks had to cast their vote over and over again until a EU friendly enough coalition came into power to approve the austerity measures and restore investors trust. 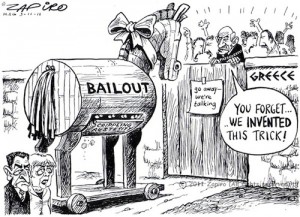 It also exposed some deeper tears in our currency. What would prevent a similar crisis to occur in countries such as Italy and Spain? Would European tax payers also have to chime in when the banks decide to dine and dash there as well? Would we have to chime in for some ill conceived and hastily implemented EU coin that ignored the big economic differences between its countries?

Then the refugee crisis hit us. Syria’s tragic fate created waves of immigration and those fleeing to the EU for safety. Angela Merkel got her PR moment with images shot of poor immigrants walking along side the railroad tracks. Merkel could now step up as the caring European mother taking in these unfortunate souls. But was Merkel in the right to speak for the whole of Europe? European countries still seem to be bickering and fighting over what country takes in how many immigrants.

In Holland inhabitants of some of the smaller towns and villages started rebelling and demonstrating against placement of big asylum centers, afraid to deal with such a sudden shift in the demographic of their town. They feel the EU is unfairly forcing refugees into Holland where as other EU members refuse to accept the EU’s set quota’s for redistribution of immigrants. Europe can only request them to accept their quotum. But should the EU receive a mandate to force immigrants unto it’s member states?

Add some prodding around from Geenstijl in he EU’s salary checks and misty and exorbitant budgetplans and you got yourself a pretty good recipe for anti-EU sentiment.

But why a referendum on Ukraine?

The above argumentation clarifies Dutch resentment of the EU, at least enough to get a referendum up and running. But why would the Dutch target a treaty with Ukraine?

Ever since this national Dutch tragedy occurred in which a Dutch civil airplane was shot down in Ukraine killing all those inside the Dutch were unwillingly dragged into the European geopolitical conflict in Ukraine.

What makes matters worse is that one and a half years after this tragedy there is still no clarity about the culprit. In our search for answers we are confronted with a parliament seemingly invested to obscure the truth. International excavation was delayed, critical commission members were unrightfully discredited and Dutch and Ukranian institutes have varying stories on what happened to the mysteriously missing radar images. Thus Dutch media and audiences have become invested in the political reality in Ukraine, in search for answers about MH17. Our news organisations are even going as far as suing our government over their unwillingness to share intel. Obviously there’s theories about a possible cover up.

The answer will have clear political consequences for the EU. Ukraine’s conflict in Crimea as well as the tragedy of MH17 convey the importance of Ukraines involvement in the EU. Luring Ukraine further into the EU is essential to extend a sphere of influence of the United States or to let Russia push it back and keep Europe dependent on its gas export (by keeping control over the black sea via Crimea). Just seeing plenty of European and American Headpieces pop up in Kiev shows the pivotal role Ukraine currently has in the power struggle for Europe.

So the Dutch will likely vote no?

Well, things might not be that simple. We don’t know yet, although the 2005 vote might have created a precedent. In order for the referendum to have any authority there needs to be a turn out of at least 30% of the Dutch. This might be harder then it seems since even our European Election had a miserable turn out of 37%. That’s a pretty meager percentage considering it had the advantage of national coverage and a long run up to the elections. So chances are the vote might not even carry any weight.

And then there is the matter of what the vote is really on. The actual content of the treaty almost seems to get lost in the mix. There is little in the fine print of the treaty to actually object to. Most of the objections are based on contextual information and statements. There are plenty of accusations that are false or contain weak argumentation that should be dispelled such as the fear that Ukraine will become a member state in no time once it becomes a candidate state. There is little historic proof to say that this will actually occur especially after the lashback from accepting Albania too early as a member state.

On the other hand there is also some vague language in the agreement on further military cooperation which could mean anything from sharing a single EU tank up to opening the Ukrainian gates for the US weapons industry via the EU. Let’s try to not be naive. Also Guantanamo bay was likely once euphemistically and intentionally vaguely formulated.

This would also be the perfect excuse for people to humiliate and punish Rutte for his broken campaign promises and the cabinets troubling attempts to delay and muddle answers concerning MH17. Especially now that Holland is presiding over the European Union these coming months, a No-vote would be the ultimate slap in the face, not just for Rutte, but for Juncker as well. It could create the perfect double bitch slap!!!!!!

So what happens if people vote NO?

So what happens then? Good question…

Our parliament might ignore a negative outcome as it has been done after the Dutch NO concerning the European constitution. That will be a lot easier if the turn out will be under 30%.

But even if the Dutch vote NO and the turn out is huge it is unlikely for the parliament to not ratify the trade agreement. With a looming Brexit, a Dutch parliamentary blockade would be catastrophic as we are currently hosting for the EU. A block might cause a domino effect.
On the other hand it has been ages since we organised a Domino Day. Perhaps a fitting excuse for Holland to organize a new European themed one in 2016? I feel a British theme might be fitting for the first room!

But the GeenPeil referendum might contain interesting questions about governance. We have been a representative democracy, but this referendum makes a case for a more inclusive and direct democracy. Technology is making it easier and easier to become politically involved directly and efficiently. But is a shift to more direct democracy a workable system of governance in the times of online trolls and endless debates sans resolution?  Is representative democracy still the best model when open source models seem to create workable precursors for more direct democratic interaction? Or is this all overt technological detemernism?

Does a hedge in between keep friendly European states green or will GeenPeil become one of the straws to break the EU’s back?