Inside the Dutch Martial Arts Movement: Tang Soo Do!

Though our most popular sport is without a doubt soccer, followed by field hockey, volleyball, and the awkwardly adorable korfball, the Dutch are both quite fond of and successful in the martial arts. Especially when it comes to kick-boxing we have a lot of dominating players that we are proud of, as well one we don’t like so much. As for Eastern martial arts, we have the legendary Anton Geesink, the first non-Japanese male to become world champion in Judo and one of the few who ever achieved the highest grade in Judo, the tenth Dan (tenth degree black belt). And if you have a few minutes to kill, please do yourself a favor and listen to the brilliant mixed martial artist Bas Rutten talk about the insane bar fight that landed him in a Swedish jail.

Last weekend, I had the pleasure to participate in the bi-annual WWFT Tang Soo Do Championship. Held for the second time in Rotterdam (after the WWTF championship of 2009), this world championship featured teams from twelve countries and participants of all ages, genders, and grades. From the youngest child to the elderly, from the white belt to the master, everyone had a chance to show his or her acquired skills in competitive hyeungs (forms) and sparring. Hyeung matches are decided through scores given by referees, while sparring matches are won by receiving the most points for a properly delivered punch or kick to either the torso or face of the opponent.

Whereas everyone has at least heard of martial arts like Karate or Judo, Tang Soo Do is still fairly unknown in the West. Developed in the ’40s and ’50s by the legendary grandmaster Hwang Kee (1914-2002), Tang Soo Do has been recognized as a Korean martial art since 1960. Ever since, this elegant and effective form of self-defense with its emphasis on devastating hand strikes and powerful high kicks has spread all over the world. And here’s one random fact about Chuck Norris you might have missed: the Almighty Chuck started his martial arts career by practicing Tang Soo Do four hours a day while stationed in South Korea.

At the start of the tournament on Saturday morning the 12th of October, the official opening was briefly interrupted to bring a pleasant surprise for the American kwan jang nim (grandmaster) Charles Ferraro. Owing to decades of hard work and care for the Tang Soo Do Family, the Dutch grandmaster Theo Salm (9th Dan) awarded him with the ninth degree black belt, the highest honor that a practitioner in this martial art can receive (within TSD, it is customary that no one accepts the tenth Dan, as it is an honor which is reserved only for its founder).

After this proud moment, the tournament began with the country team hyeungs. This first contest was won by the Dutch team with their absolutely stunning display of skill and creativity:

After every participant had proved his/her worth in the forms, the day was closed off with the country team sparring matches. After many rounds of very intense fighting, the Dutch team was victorious after a close call finale with the Greek.

The second day of the tournament was almost exclusively reserved for the individual sparring matches, wherein each participant was matched up with several peers of the same grade, gender, and weight. The tournament had one last treat for all the spectators, as the winners of each black belt competition faced each other in the Grand Division. 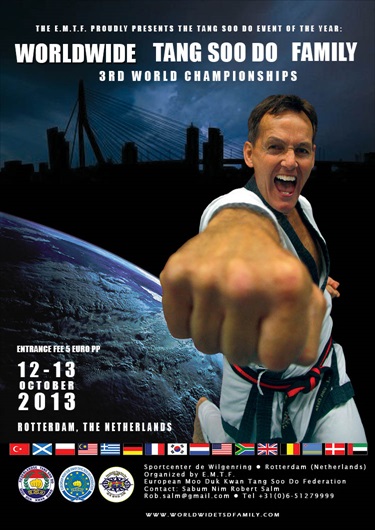 The championship was made possible by the hard work, the enthusiasm, and above all the sportsmanship of all the contestants and organizers. It is not without reason that we call ourselves a family, because sharing our passion for Tang Soo Do is what brings us closer together every time. And between all the punching and kicking we did, there was plenty of time have a sit, cheer for the other guy, and even make new friends from all over the world.

For all those who participated or watched, I say: kamsahamnida! Thanks for the incredible experience and we’ll see each other again in two years at the 2015 WWTF Tang Soo Do Championship in the US.

Frank Kool has been practicing Tang Soo Do at the Hûk-Tti dojang in Rotterdam, The Netherlands ever since he fell in love with the sport two and a half years ago. He currently holds the 1st kûp grade (black striped red belt).