More than Seedorf and Bouterse: The Dutch-Suriname link

The Dutch-Suriname link embodies more than the most successful ‘Dutch’ club footballer of all time, Clarence Seedorf, and the current president Desi Bouterse. That is an insight I’ve gained in the last twenty years, which is not really spectacular but certainly valuable. Certainly if you want to write something meaningful about this topic, even though football is very meaningful in itself while being the most important side issue in the world. Last week the word ‘meaningful’ proved itself when Suriname celebrated its 40th anniversary of independence, after liberating themselves from the Dutch colonial joke, and this week there was the news about the possible restart of the prosecution of Desi Bouterse.

Therefore I thought it was a good occasion to introduce you to the way I have connected some dots between the Dutch and the Suriname entity in the last twenty years and  expanded it to more than football alone, although it’ll still be a small part in this story. Some of the dots I’ve gathered in the Dutch-Suriname link contain Lord of the Rings (LOTR), peanut butter, Kenny B and KLM. Did I draw your attention? That was exactly my purpose. So sit back and enjoy while I’ll share some curious insights about the way the Dutch-Suriname relationship is stored in my brain.

The Dutch King and Queen with Clarence Seedorf

Although the Dutchies aren’t very fond of history, I feel the occasional plight to talk about the things that were to explain the things that are and sometimes predict the things that have not yet come to pass, as to quote Galadriel from LOTR. History professor from the University of Leiden, Geerten Waling, explained this lack of interest by pointing out the Dutch conciseness with typical Dutch quotes about history like ‘you can’t eat from history’ and as ‘a funny thing to know’. Well, if you  can’t eat from it, that doesn’t mean it’s not meaningful. I mean, you can eat (a lot) from corruption, but that doesn’t make it a good thing. So far this side step about the way most Dutchies look at history.

The Dutch-Suriname relationship goes back to the ‘60s, the 1660’s that is, the century when Holland experienced some of its finest moments in world history. It was the Dutch commander Abraham Crijnssen who conquered an English fortress nearby Paramaribo in 1667. A couple of years before, in 1664, the English conquered the Dutch colony of New Amsterdam, better known as New York nowadays. These are the most important facts to explain the Dutch-English substitution of Suriname for New Amsterdam, at the end of the Second Dutch-English War. This war ended with the Treaty of Breda, in 1667, in which this substitution was formalized. Suriname was ours now. 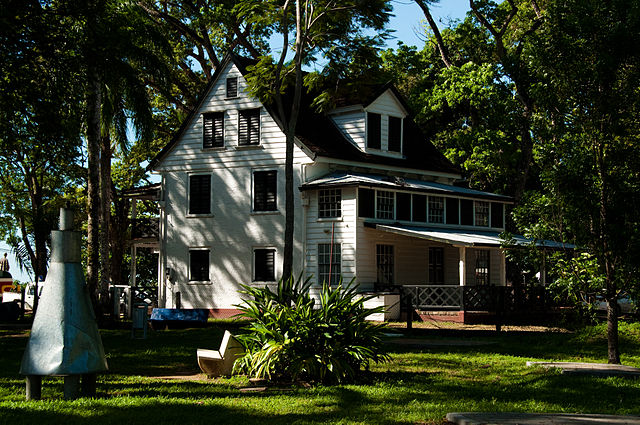 Patrician Residence at fortress Zeelandia nowadays, that was conquered from the English in the 17th century

From the Treaty of Breda Suriname developed itself in the upcoming centuries from a conquered country, to a colony, to an autonomous country and finally to an independent republic. This last stage was reached in 1975. One of the most important reasons for the Dutch government to cooperate with this wish for independence was to stop the ‘tsunami’ of Suriname migrants. They wanted them to get the nationality of their birthplace and lose their Dutch citizenship to prevent this migration wave. During the negotiations for independence a compromise was reached in which there would be a five year transitional arrangement for the Surinamers. They had five years, after becoming an independent state, to move back and forth, before an official visa was required to migrate to the Netherlands. In the meantime there were some additional restrictions to come to Holland, for instance by proving they’ve had enough money and arranged a place to live, and therefore to prevent the extra burden for the Dutch welfare state.

But the most funny thing the Dutch government did to prevent the Surinamers to come to Holland, a couple of months before the transitional migration arrangement in November 1980 was ended, was to buy most of the passengers seats at the Paramaribo-Amsterdam flights of KLM to suggest the whole flight was booked. KLM actually circumvented this government tactics by increasing the number of flights between Paramaribo and Amsterdam and earned a nice extra amount of money.

Demonstration for indepence, in 1971.

Although the Dutch are famous for their so-called tolerance towards immigrants, they rather keep most of them outside the borders of their country. And we’d like to give the ones that are in Holland the right push to move away. That kind of migration policy seems applicable to the situation nowadays as it was for the Surinamers in the ‘70s and ‘80s. We did everything to get rid of them, because most Dutchies had a negative image about Surinamers, mainly based on a group of Suriname drug abusers reaching the news back then causing all sorts of trouble in the capital, during the so-called heroin-epidemic. The measures the Dutch government took to enhance remigration were for example to pay for the passage of the remigration, to give them 1.000 guilder as pocket money, to give them a transportable alimony and they could even maintain their Dutch citizenship for two years after the remigration. But the Surinamers rather stayed in Holland, because the Suriname state was yet to be built and had to deal with all sorts of structural problems like a high unemployment rate, a great shortage of high educated people, a high dependency on foreign investments, scarce accommodation, an unstable political climate and a negative attitude towards remigrants.

The biggest dividing factor between the Netherlands and Suriname nowadays is called Desi Bouterse, the current president of the South-American Republic. Desi Bouterse came to power at the 25th of February 1980, via a military putsch. He’s the head suspect in the case of the ‘Decembermoorden’, in the ‘Moiwana massacre’ and convicted for his share in a drugs transport. A pretty impressive resume you would say to become a president, but luckily for him the Surinamers share the same ‘you-can’t-eat-from-it’-attitude towards history as the Dutch, so there was no real obstacle to become a president and to be re-elected. But the Dutch did mind about the resume of the president, certainly when the case of the Decembermoorden was suspended in 2012 (until now?). Therefore the Dutch government decided to stop the flow of development money and retreat its ambassador, Aart Jacobi. The Dutch-Suriname relation was at a low and the Dutch decided that Bouterse would only be welcome in Holland to serve his jail time. Though this freezing relationship can all get better if he’s persecuted yet by the Suriname prosecutor’s public department. 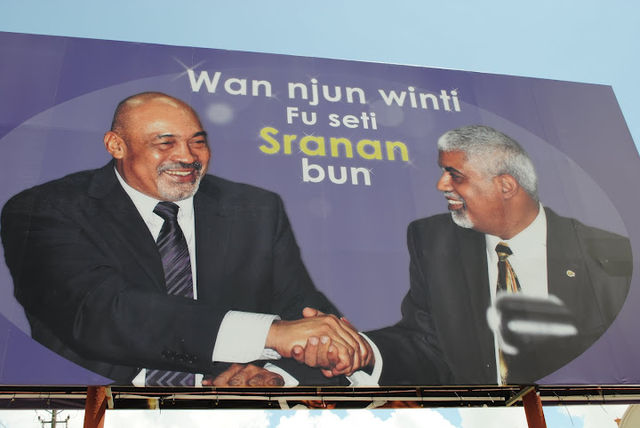 There, I told you everything about the way the Dutch-Suriname link is curiously stored in my brain. I hope there will be many more dots added in this link so I can give you another update. For now I will end this issue with a happy song.