The new Dutch Cabinet: 5 things that are going to happen

Prime Minister Rutte has assembled his band of merry men and women in a final attempt to form a viable and effective new Dutch cabinet. It has been a long time coming but can these new Avengers really achieve anything worthwhile? Already facing criticism for his key players at least we may now see some political progress.

14 men. 10 woman. Naturally the equality worriers are jumping up and down already due to a lack of parity however in an Cabinet be it Dutch, English, French etc we trust the Prime Minister to promote the best people to positions of power not on the basis of gender equality.

Homogenous. They all kind of look the same. There is no obvious ethnic mix and with an average of 48.5  are they really a true representation of the Netherlands today? I’ll leave you to ponder that.

Rotterdammers. Nearly half of the new Dutch cabinet has some link to Hollands favorite Port. Coincidence or down to the fact that everyone loves Rotterdam?

A Coalition of Chaos or the best way to do politics?

In a perfect world we all want a bit of everything. When you open the chocolates at Christmas do you really like all of them? (Take Revels for example – who even eats the coffee ones?!) Can we really afford to take this view with our country’s politics? When you hear what the VVD are offering verses PVV leader Geert Wilders can anyone genuinely say they fully agree with every policy? 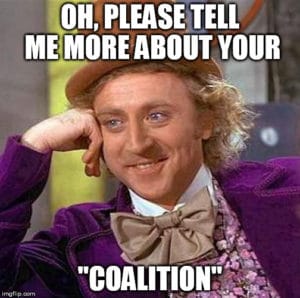 Coalitions, by definition, are a mix of the best bits or as some may say a last ditched attempt at cobbling together to ensure power – but we are optimistic of this marriage of politics because we have to be. Here are some of the highlights for me in the plans for the new Dutch coalition of The Kingdom of The Netherlands.

The new two band system and a top rate tax cut can help to boost the Dutch economy and with plans to raise the personal tax free limit to €30k a year everyone is a winner right? The beautiful* (*subjective opinion) Mr Hoekstra has this brief and his christian ethics quite clearly coming in to play here.

#2 Pensions and the new Dutch coalition

The world is talking about pensions at the moment. The UK system is failing at a rate of knots and the Dutch system will too unless the expected overhaul isn’t thought through carefully. Not too sure who gets this job but I have a feeling Mr Wiebes with his background in the tax office might have some input, but then again the Dutch taxman isn’t doing all too well at the moment.

The Dutch in may ways are full of hot air. Being both a flat and windy country the most sensible way to capture and use renewable energy is wind, and in my opinion solar. However, that seems to have evaded the draft plans this time around. We have to face facts that our need for energy is forever increasing and more offshore windfarms could be the answer plus it fits in with the dream of a 50% reduction in CO2 promised by Mr Rutte and the move from coal power stations. My only hope is that if we are phasing out power stations over the next thirteen years we do so gradually and in a controlled manner.

Doing the rounds again – the Dutch are far more keen than the English and the American’s at picking ones own sell-by date. Rutte is planning to bring the social discussion back. We’ve talked about this before and I have pondered my views on it for years but my position remains the same. There are too many ways in which any controlled euthanasia system can be abused. People deserve the right to choose when they want to die but some people will use it maliciously to pop off their elders in a bid to get an early withdrawal on their inheritance.

There are loads of articles on DutchReview about euthanasia, here’s the latest one

So I suppose the question on everyone’s lips now is: Can Mr Rutte’s new squad really boost the economy, save the ozone layer, protect old people and get people off or will it be a coalition that splits at the seams once again for failing to tackle immigration, underspending on road maintenance and continuing to charge the sick? We shall see, and here at the Dutch Review will shall assess every bump in the road.

How do you feel about the new Dutch cabinet plans? Feel free to comment and pitch in!