CONGRATULATIONS! You have been elected as the new Pope of the Catholic Church! Before picking up your free life-long subscription of littleBoysR’us, please answer the following questions:

1. The chance that a woman becomes pregnant after being raped is… a) …close to zero, b) …just as big as with mutually consensual sex, c) …for unknown reasons, twice as high as with consensual sex.

3. Child abusers in your company should be… a) …protected from prosecution, b) …fired, c) …fired and drowned in the deepest ocean you can find.

5) The theory of evolution is… a) …a fad that will probably blow over soon, b) …the cornerstone of biology and one of the most strongly supported and vigorously tested theories in the history of science, c) Don’t know, I’ve never played Pokemon.

7) Women should… a) …have a nice big glass of Shut The Fuck Up, b) …be considered as equals and be judged according to personal merit, c) … be eligible to become the next Pope.

8) Will you be… a) …an associate of Silvio Berlusconi, aka the international face of corruption, b) …a Pope of the good and faithful people, c) …man of the people, especially now that these plebeians are considered free to form and express their own opinions.

9) The Gospels… a) …are a-okay with amassing huge wealth, b) …preach a poor and ascetic lifestyle, c) …have some pretty wicked stories in them, especially the one where that hippie feeds 5,000 people with only two fishes and a piece of bread, thus causing the Palestine Retail Collapse of 33 AD.

[_] I agree with the terms of agreement and all subsequent dresses and funny hats.

(PRO-TIP for Catholicing Like a Boss: A is the new B) 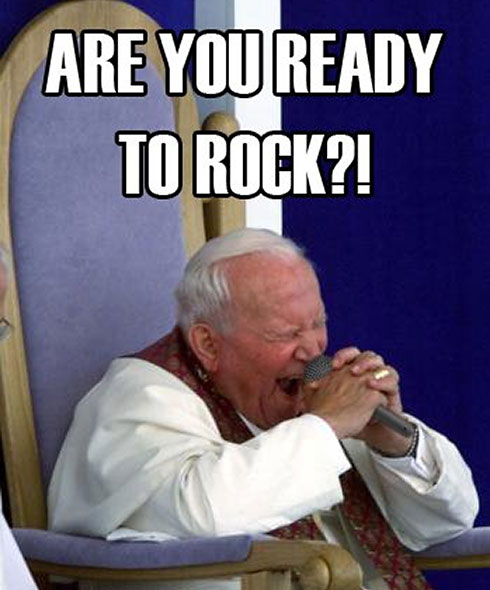 Previous articleKing Willem-Alexander to take what is his. Hail to the King, Baby!
Next articleBadr is Back! Oh wait, nevermind…