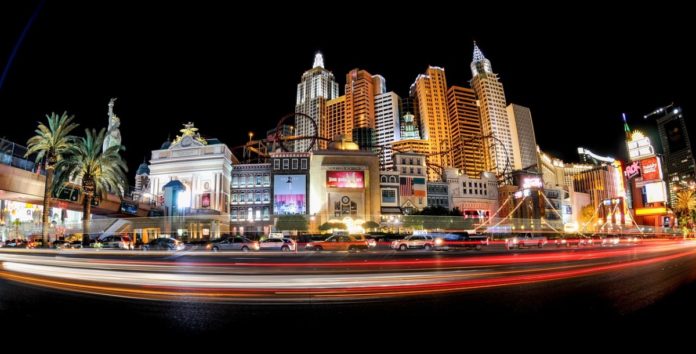 Amsterdam, NL and Las Vegas, Nevada both have the nickname Sin City.  That’s right, what happens in Vegas stays in Vegas.  I propose an equivalent saying for the Dutch capital that goes what happens in Amsterdam, no one gives a sh**.  Either way, you crawl away with reputation intact (somehow).  So how do the two with Sin City of the northern hemisphere reputations stack up for a visit, not just in “adult entertainment” aspects?

They have similarities but also gaping differences.  They are roughly the same population and size, though Las Vegas has about 25 percent less people and 25 percent more area.

Amsterdam was founded in year 1275 with humble beginnings (go figure) as a fishing village on the River Amstel. As the harbour grew, so did the sex trade and gambling.  Find a need and fill it?  After bouncing up and down illegally for several hundred years, the red light district came out on top (pun intended).

Las Vegas, the new kid on the block, was founded in 1905 by ranchers and railroad workers.  They needed entertainment, so illegal gambling, prostitution and the Mafia broke out!  Ironically enough, a dam was involved.  The Hoover dam was built 35 miles away in 1930 needing many workers and Las Vegas population quintupled.  Prostitution has been around Nevada since 1800’s, but legal prostitution is not allowed in Las Vegas.

Sin City one and two could not be more different. For starters, one is in a desert and the other is next to the cold North Sea.

The lesson here is, visit Amsterdam around summer, Las Vegas around winter.  Lots of swimming pools in Las Vegas, but not much biking unless you want heat stroke (or it’s Winter).

Both cities have international appeal.  Amsterdam has history.  Beautiful century old buildings and 165 canals, bicycles and boats with strolling around appeal.

People living in Amsterdam often live in dense apartment like dwellings. There are many outdoor neighbourhood markets.

Las Vegas, however has glitter and nightlife, huge casinos and swimming pools, cabaret and stage shows, and is open 24 hours.  Most activity is indoors.

Amsterdam has the fascination of things as they once were.  Las Vegas has re-created things from around the world so you feel like you are there.  Two completely different enjoyable atmospheres.

Rating:  Again, To Your Liking

Amsterdam being more compact is big on walking and peddling.  Amsterdam Public Transport offers “trams, trains, metro and buses” with reasonable rates and many options, including the airport.  For those who need a cab, they are available along with Uber. Don’t drive.  You don’t need to.  Walk or bike.

Las Vegas is spread out along the “strip”, the main stretch of casinos.  One Vegas city block is five or ten in Amsterdam.

So hop a fancy monorail down the strip.  Take a tram, or a bus.  Taxis and Uber can get you around any time.  Hit a jackpot?  Jump in a limo find one here!  Go big.  Get one with a hot tub and bar!

Some casinos have free shuttles, too.  Shuttles often service the airport free.  Good to know if your wallet has been swallowed by a blackjack table.  Parking is plentiful.  It’s just not so easy to take off on foot.

Rating:  Amsterdam Scores by a Foot

Las Vegas also has stunning architecture, recreated from around the world.

Vegas does have museums.  Um, well…  the Burlesque Hall of Fame, a Mob and a Neon Museum…  In fairness, it has an Art and Natural History Museum.  There is crazy entertainment like thrill rides atop a 900 foot tall building.  There’s a roller coaster that goes through a casino, an overhead zip line careening people, tons of shows and more.

Rating:  Amsterdam for culture and Las Vegas for entertainment

Las Vegas and Amsterdam are the kings of adult entertainment on the North half of the globe.  Both have gambling and liberal views on sex.

Sex and drugs in Sin City?  The Red Light District “outstrips” Vegas.  Sex on sale in busy street windows near marijuana shops?  Legal sex in parks after dark? Legal public nudity?  Sorry, Vegas.  Sure, you have cabaret shows, escort services and peep shows, but you lose.  In Las Vegas itself, prostitution is illegal.  But, ninety percent of prostitution in Nevada is in Las Vegas illegally, much as “escort service”.  Want a friendly escort who will do anything you ask?  No worries!  It’s not regulated so buyer beware!  Soft drugs?  It’s not legal or overlooked to use marijuana in public in Vegas.

Rating:  For Sex, Amsterdam is “All In”

Let’s talk about gambling.  Amsterdam has casinos around town all owned by one entity therefore no competitive edge. (might be better off to play slots at NetBet)

Las Vegas, affectionately known as “Lost Wages” is all about the world flying in to gamble, party and leave money there.  It’s expensive to run all those lights in Sin City USA.  Look out for snake eyes!

Amsterdam has many outdoor markets and food tours.  Visitors can sample traditional Dutch delicacies.  With a large international population, restaurants offer food from around the globe.  Of course fantastic cheeses or unique pastries to spike your blood sugar off the chart are available.

Las Vegas has few outdoor summer events, as food and visitors both would melt into a puddle.  The city is however a magnet for world renown celebrity chefs like Emeril Lagasse and Wolfgang Puck to mention a few.  Many have casino restaurants.  High rollers must eat too!  Huge buffets in casinos also challenge your calorie intake.

Rating:  Vegas is Decadence, Amsterdam is Tradition. Pick Your Poison

General cost of living for locals in Amsterdam is about 22% less than New York City (ehr, New Amsterdam).  Las Vegas is about 30% less than NYC.

Having said that, bread, beer, wine, cheese, cappuccino and groceries in Amsterdam cost less.  So eat, drink and be Merry!  If you are gambling in Vegas, free drinks are probable (GUI- Gambling Under the Influence, is encouraged).  Amsterdam includes tips in their meal costs, but not Las Vegas.

Rating:  This Should go to Vegas, but raise your hand if  have once lived only on bread, beer, wine, cheese and cappuccino, so it’s a Toss-Up.

Lodging and getting around costs

Las Vegas costs about 20 percent less to get around in as per a link above.  Summer hotel prices in Amsterdam mainstream hotels range from mid $100’s USD and up.  Las Vegas is $50 and up, at casinos and motels.  If you throw a bunch of money at a crap table (a big bunch) you can be a casino’s best friend and your room may be comped, but if you can afford that, you don’t care about any of this and you already have the limo with a bar.

There is a sizeable difference in costs for local travel, even with all the walking done in Amsterdam.

Rating:  Vegas Gets A Round

Finally, both cities report to a king. Amsterdam to King Willem-Alexander, and Las Vegas to Elvis.

I choose not to compare them.  They are as different as the two cities, and that’s OK.

But either city, “Well, it’s one for the money, two for the show, three to get ready, now go, cat go!”  So have an adventure! That’s life.

Previous articleBig Amsterdam power failure – Rijksmuseum evacuated and no trams!
Next articleSpring is that you? 17 degrees on the thermometer! (but there’s a catch)