I will continue to cover this developing story, but let’s first take a look at what the hell happened with the Dutch, the Kurds and ISIS.

EDIT: Police is in control of the situation. Kurdish protestors won’t leave until they have spoken with MP’s. Check out this picture as well, hundreds of police officers.

Where were these guys when there were pro-ISIS demonstrations in The Hague?

Srebrenica 2.0: The fall of Kobane to ISIS

The Dutch have their own Vietnam-trauma, it’s called Srebrenica. During the summer of 1995 Dutch peacekeeping forces stood still and watched while Bosnian-Serbian forces captured the enclave, separated men and woman and proceeded with the biggest mass murder in Europe since the 1940’s. The Dutch continued to struggle with what they had done, or hadn’t done, but one thing once again stood clear above all: no more genocides! Fast forward to October 2014.

After the usual doubting and useless squabbling the Dutch government jumped on the American-led ISIS bombing bandwagon. A bandwagon that was quickly filled up with more than half of the world nations from the looks of it. Strong words were uttered as well. Prime-minister Mark Rutte, originally a Leiden University educated historian, even compared ISIS to the Nazism. His message was that the fight against ISIS is comparable to the allied fight in World War 2 and we’re fighting for our core values. Strong words indeed but the message of such a comparison is clear: we will do everything in our power (which comes down to 6 F-16’s nowadays apparently) to annihilate ISIS. And yes annihilate, we’re talking NAZI’s here people, they’re the worst.

There’s a Dutch saying (or call it phrase or proverb) that goes ‘Talks don’t fill holes’ ; it is more or less the equivalent of ‘put your money where your mouth is’. For anybody watching the news these days we can see at least one thing not happening and that is the international coalition not standing up for the threatened Kurdish people in the town of Kobane despite all kinds of strong claims to do just that. And the Dutch government is also to blame (okay, granted, Turkey and Saudi Arabia – that other Islamic State- are to blame to a bigger extend).

The Dutch ineptitude in fighting ISIS

Granted, jihadic scum (sorry this article is getting a bit biased) is not openly dancing the streets of The Hague anymore as they did the past summer.

But the response is still lacking, fanatics are still traveling to Syria and Iraq in order to fight for ISIS. The contingent of people with a Dutch passport there is still growing and getting more prominent. Last week after the first bombings a Dutch jihadi called for attacks on the Netherlands as you can see and read here.

And this weekend our new worst enemy even wished everybody (well okay, just the muslims) a happy Eid Mubarak. Here’s the holiday card: 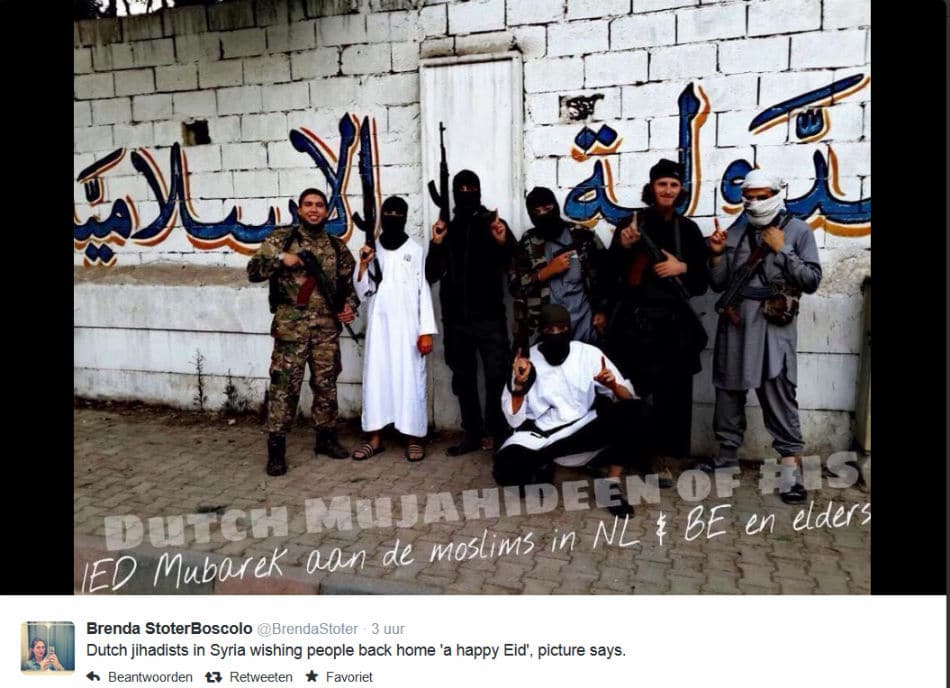 And of course, six F-16’s is not enough, sending armored vests and helmets to the Kurds and no heavy weapons is not enough and as a final ‘show of strength’ of the Dutch: merely bombing in Iraq instead of Syria is also not enough. Damnit Mark Rutte, how would the world look today if the allied only bombed the Nazi’s in certain parts of Europe?

See that’s the point, if you’re going to use a strong and potent framework as ‘enemy = nazi’ then you need to back those words up. There’s no excuse if you’re not doing that. You can’t hide behind the US (more airstrikes now please Obama!), or behind legal international obstructions thrown up by the Russians (The same Russians who backed the rebels that shot down MH-17 with over 100 Dutch people in it this summer). And call a time-out in your ridiculous friendship with Turkey, they are for a large part to blame for the rise of ISIS.

And no it’s not because I support the Kurds in this conflict (which I do) or because I hate ISIS and other terrorists for hi-jacking and stigmatizing my nickname Abu.

No it’s because of the people of Kobane, waiting on the big mouthed international community to come through and help them out. So Mark Rutte or Frans Timmermans, call the Turkish ambassador, send the planes into Syria, email Obama, tweet to @Centcom for more raids and airlift weapons to the Kurds. Just do something already in order to at least try and prevent Kobane being the Srebrenica of our time.