The Combination Penalty: A Tribute from Barça to Johan Cruijff

There are many things that Johan Cruijff brought to the game of football, of which the combination penalty is just a small one. It was a rare act of ingenuity, creativity and momentum, in a game between Ajax and Helmond Sport (1982), to show everyone his superior understanding of the game together with Jesper Olsen. On Sunday evening, I saw a similar act of brilliance and slight arrogance  when the current Barça team took on Celta de Vigo and tried to copy Cruijff’s combination penalty. It was a touching gesture from the club that owes everything that they’ve achieved to Cruijff’s ideas of how to play football, to a man who is unfortunately suffering from lung cancer nowadays. In this article I’ll give you a brief history of how the beautiful symbiosis between Barça and Cruijff came into being.

The combination penalty from Messi and Suarez

In the summer of ’73 Cruijff was bought by Barcelona from Ajax, for a stunning 2,5 million euros. With that he broke a transfer record. It was in an era that the pride of Catalonia had not been champions for 13 years in La Liga. Spanish football was at that time dominated by archrivals Real Madrid and Atletico and Spain was still ruled by general Franco. Before the Cruijff-transfer there was even a ban on transferring foreign players to Spanish clubs. There was no space for Catalan nationalism or autonomy and the province felt suffocated by the dictatorship and its brutal ways of implementing national homogeneity. At that time Johan Cruijff was the man of whom the Catalans believed that he would give them their pride back and redeem them from the nationalist yoke of the capital.

Johan Cruijff. El Flaco, the skinny one. He came, he saw and conquered La Liga in 1974 with FC Barcelona. Along the way Barcelona defeated rivals Real Madrid on the basis of Cruijff in Santiago Bernabeu, with 5-0. Thousands of Catalan people poured out in the streets to celebrate this victory. A New York Times journalist even wrote about this victory: ‘Cruijff had done more for the spirit of the Catalan people in 90 minutes than many politicians in years of struggle.’ Cruijff really identified himself with the Catalan cause, and therefore named his son Jordi, after San Jordi, the Patron of the Province of Catalunya. I mean, how much of a statement can you make to make clear that you are anti-Madrid.

The historical game between Real Madrid and Barcelona 1973/74

‘Before I make a mistake, I don’t make that mistake’ is a well-known statement of Johan Cruijff which embodies one of the most successful eras of FC Barcelona. Cruijff arrived as a coach to Los Cules in 1988 and became champion in La Liga for four successive times in a row. He also brought them their first Cup Winners Cup ever in 1992, when Ronald Koeman hammered home a ferocious free kick against Sampdoria. Cruijff’s team was known as the Dream Team, with players like Hristo Stoichkov, Michael Laudrup and Ronald ‘Snowflake’ Koeman. It is widely acknowledged that the winning streak of Cruijff’s Dream Team permanently made an end to the inferiority complex of FC Barcelona towards Real Madrid.  But more important than the prices he brought to Camp Nou, was the philosophy of ‘Total Football’ that he implemented, which is interwoven into the Barça-DNA. All the Dream Teams they have had after that, like Pep’s Barça and the current team of Luis Enrique, recognize this important legacy, even though they’ve added some new aspects to that DNA. Every talent at Barça’s Talent Academy, La Masia, is nurtured with this philosophy of ‘Total Football’ in which continually swapping places on the pitch to cause confusion, keeping ball possession->’if you have the ball, your opponent can’t score’, pressuring forward to reconquer the ball asap and game fun are the most important aspects. 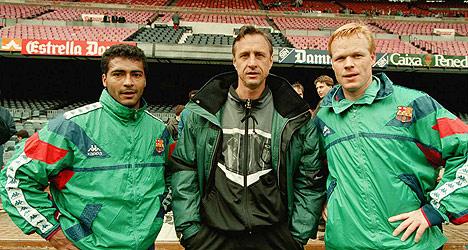 If you’re as successful as Cruijff, you’ll definitely create enemies. Certainly when your philosophy of ‘how to play football’ is not always clear-cut: ‘If I wanted you to understand, I would have explained it better’. Others will not always understand this and find it hard to work with a concept that can’t be explained or let someone take control of the club with such a philosophy, especially when the results get worse or when that someone has no official position within the club. Cruijff was sacked as a manager by President Núñez in 1996 after failing to continue the four championship titles in a row and winning another Cup Winners Cup. Núñez stabbed him in the back by appointing a new manager, Bobby Robson, of which he found out via the Saturday newspapers. Johan was furious about it and it led eventually to a painful end of the most successful era in the club’s history till then. After the break-up there have been Barça presidents who came to Cruijff for his advice and support on how to manage the club and others that wanted to ban his never constant influence and prudish yoke, but he always stayed in the hearts and the minds of the club and the Catalan people. They will never forget the everlasting sportive and cultural impact he had on the club and the region, which is formidably illustrated in the documentary ‘En un momento dado’.  Ànims Johan, get well Johan!!

Previous articleBombing ISIS: why we should(n’t) do it
Next articleRietveld, Colonialism and Art; an Interview with Dutch-Surinamese Artist, Remy Jungerman.

Imagine that you're taking a stroll through the picturesque streets of any given Dutch city. ☀️ The sun is glistening...