The Kröller-Müller Museum: A day of great nature and Van Gogh

How the Kröller-Müller Museum is perfect for a day trip in the Netherlands and shows you a different part of the country.

The Kröller-Müller Museum is the perfect opportunity to escape the busy Randstad, see some of the best nature scenery the Netherlands has to offer and gaze at Van Gogh’s without busloads of tourists blocking the way (sorry for all the busloads of tourists reading this). Oh and people, there’s so much more there!

But what, where, how and what’s a Kröller-Müller? I hear you people thinking at the other end of this internet connection, so let’s answer all the 6 top questions you might have about this cultural (and natural!) treasure of the Netherlands.

Outside Amsterdam and the ‘Holland’ part of the Netherlands there’s a world to discover, and one of the highlights of the province of Gelderland is the the Kröller-Müller Museum which is conveniently located in one of the best Dutch nature reserves: De Hoge Veluwe National Park. After a scenic ride through these beautiful forests you’re rewarded with an iconic museum which can boast a great design, a great collection of paintings and other art and one of the largest sculpture gardens of Europe.

“So who and what is this Kröller-Müller? Sounds different than any other Dutch museum!”

The Muller part of the name refers to Helene Kröller-Müller (1869 – 1939), and the Kröller part to her husband Anton Kröller. Besides having nicely rhyming surnames this high-society couple of a bygone era was big on collecting art. Helene, daughter of a wealthy steel magnate, made it her dream to build a museum for her collection of modern art. The couple acquired more than 11.000 works of art between 1907 and 1935, and Helene especially had a taste for modern art. A good part of this collection was made up by a certain one-eared painter from the Netherlands (more on that later).

In 1938 Helene’s dream came true, and the Kröller-Müller Museum was openend – sadly Helene past away one year later.

What’s there to see at the Kröller-Müller museum?

The museum design itself is already worthy of a visit, designed by Belgian architect Henry van de Velde – and a new wing was added in 1977. As always pics do a way better job than words when it’s about aesthetics:

Then there’s also the renowned sculpture garden. Opened in 1961 the garden is now a whopping 25 hectares. Distributed throughout the garden are over 160 sculptures by iconic artists (for the art fans, there’s work there from Aristide Maillol, Pierre Huyghe and I especially enjoyed the setting of the golden head statues by Jan Fabre). It’s kind of magical to see how the sculptures, garden and park merge together: 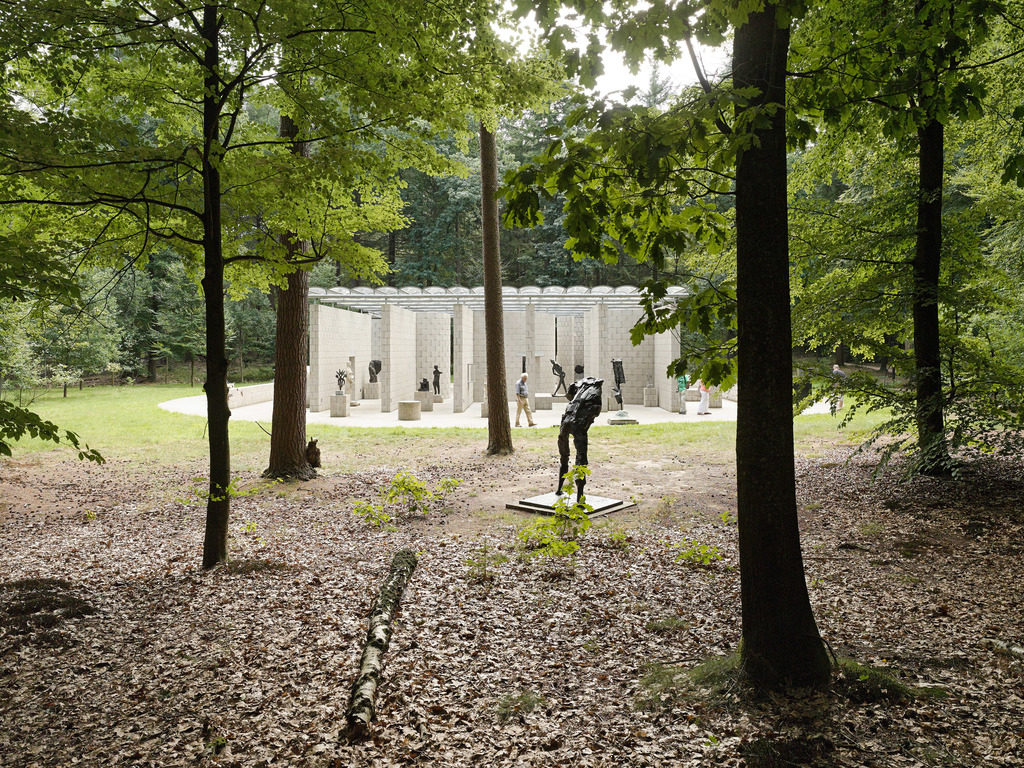 The collection inside is of course what matters the most, and boy oh boy it does not disappoint. Kind of surprised that somewhere tucked away in these woods of provincial Netherlands there is such an amazing collection of artwork.

There’s something there for everybody, I’m talking about:

There’s also work from modern masters such as Claude Monet, Georges Seurat and Pablo Picasso there. Oh, and of course there’s the tiny detail that the Kröller-Müller Museum houses the 2nd biggest collection of Van Gogh’s in the world.

Wait, they’ve got Van Gogh’s at the Kröller-Müller?

After the Van Gogh Museum (that was to be expected) the Kröller-Müller has the biggest collection of Van Gogh’s in the world. Helene Kröller-Müller actually added to the rising popularity of the Dutch master when she bought more and more of his work. There are some real eye-catchers present as well:

Before Van Gogh moved to France and created his most famous pieces of art he also produced a lot of other interesting paintings in the Netherlands. The museum has a really nice exposition going on until the 9th of April, so if you’re into Van Gogh better don’t miss that one. The man lived an interesting life full of hardships (apparently 19th century Holland wasn’t all pretty) and you really catch that gritty vibe of pre-France Vincent.

Oh don’t worry about the language, everything shown in Dutch is also shown in English, they’ve also got audio-guides in multiple languages. More info about the early Van Gogh exposition can be found here.

And what about that Hoge Veluwe National Park?

On top of all of this the museum isn’t just located at a random place but right in the heart of one the most beautiful nature reserves of the Netherlands: the Veluwe. It’s kind of an un-Dutch landscape with sand dunes, surprising lakes, woodlands and wildlife such as boars, foxes, deers and badgers. It’s no surprise it’s very popular with the Dutch people.

On top of that you can rent a a so-called white bike for free from the Park! That way you can cruise through the nature reserve and enjoy an outdoorsy morning and see the museum in the afternoon for example, perfect!

Alright I’m going! How do I get to the Kröller-Müller?

It’s easiest by car in my opinion. Since it’s in the country-side there’s no trainstation right next to it, part of the charm of course. The museum is located in the Hoge Veluwe Park, and you have the choice of either parking the car straight away  (3 euro something) and walking/biking to the museum through the park, which is a 2 kilometers hike and the way to go if the weather is good and you’ve got the time. Parking at the museum itself is 6.60 euro.  Oh, and both the drive and the hike to the museum are very nice if you were wondering:

More info on how to get to the park can be found here. Opening hours and such here.

Have you already been to the Kröller-Müller museum? What did you like the most about it? Feel free to share!

Images: courtesy of DutchReview or Supplied by the Kröller-Müller museum

Previous articleTen ‘Alternative’ Actions for Dutch Re-colonization of the USA
Next articleCandidate Eelco Keij and the International Vote: a closer look