Damnit Dutchies! We were doing so ‘good’, for a full two days this nation’s headlines were occupied by good old ethnically divided political infighting, clearly showing that our political leadership was still number one when it came to getting dumb headlines out there. With our national football squad consistent shabby performance being a good number two in the media’s and the people attention. But then this Saturday our (cultural and/or racist) tradition had officially taken over all headlines once more, and this stuff went down during Sinterklaas his homecoming parade in Gouda.

It was actually and sadly kind of expected. And although we have had our fair share of Zwarte Piet articles, I also wanted to put my two cents in for this debate and share my observations. 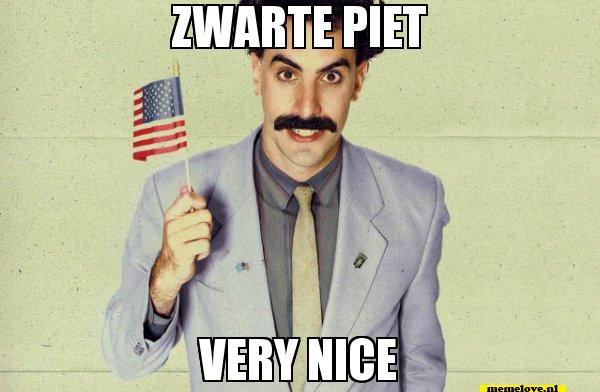 #1. Some people are way too racist

We’ve already came to the conclusion that the Netherlands has its fair share of (hidden) racists. Some people can’t keep there right arm down during protests and there is just some marginal part of the population who is officially retarded and vote for Wilders. Luckily, it’s all kept hidden behind a thin veil of faked decency and some actual thinking things through. But come the Zwarte Piet discussion all of that is thrown out of the window and this stuff happens:

Yes, international readers, that is one third of our beloved national football squad being called ‘monkeys’ or ‘where are the chains’ by our ‘normally jolly orange fans – but during Sinterklaas extremely racists people’. Stop that shit, it’s not right never, and when did people think it was a good idea to post this stuff out in the open on Facebook or Twitter?

#2. Some people hate the Netherlands way too much

I get it. Circle parties are boring, our weather is crappy and the tradition of Zwarte Piet is somewhat racist. So tweet or state your opinion about it while half drunken at some afterwork Friday drinking session, it’s okay, we all voice opinions now and then – even stupid opinions. And then there is this:

One can disagree with this little movie. But I’m wondering what has gotten into people who travel all the way to London to complain about Zwarte Piet there as well. Same goes for the people protesting in Gouda as well, there are children there and it’s Saturday. Go spend your weekend somewhere else.

#3. The Dutch have got it way too good

Our children are the happiest in the world, our students only meagerly show up for protesting when you take away their free money and when it’s not Zwarte Piet season our nation is preoccupied with Guus Hiddink his promise to quit on the national squad when losing to Letland tonight.

Yes, Holland is officially completed 100%. Things are good over here. Apparently there isn’t anything worthwhile to spend more attention or media-time on than Zwarte Piet gate. It also doesn’t help with all the media and the good ol’ Telegraaf constantly reporting on the matter in big black headers.

Sad thing is that I just spent some two hours this weekend on this whole Zwarte Piet thing, even sadder is that the rest of the nation has spent a whole week on it. Let’s just hope we can spend more time on serious stuff like getting focused on destroying ISIS or actually rejoice in the newest Dutch cultural achievements.

Or at the very least see if our ‘Oranje’ team will get it done tonight against Latvia.

Note: Not racist enough for you? Didn’t condemn Black Pete enough? You’re certain that Van Persie will get the job done against Latvia tonight? Feel free to discuss this in comments in decent fashion, or tell it to my face at twitter (@AbuzerVL)

Previous article‘Colonial Hangover’, or Culture Clash?
Next article‘In Almelo there’s always something to do’: A tribute to Herman Finkers.

An 81-year-old woman from Volendam has just received a sentence of two years in prison for the attempted homicide of...