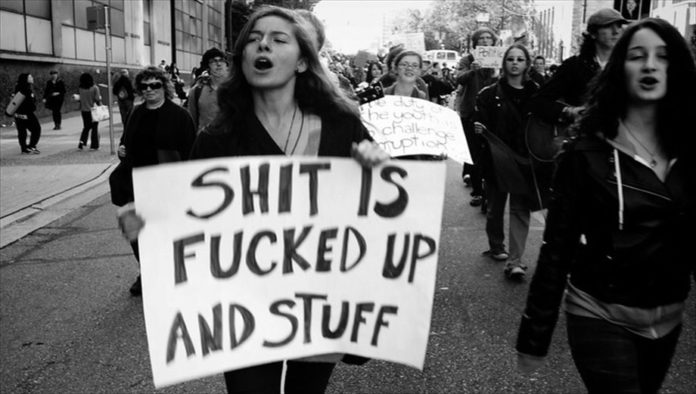 Ask the average American about the appearance of a conservative person and chances are that he will say something like this: ‘Well, a conservative is a pale, slightly obese, white man, wearing button-down shirts with fuzzy vests and out-dated ties. Although he might have enough money to visit a dentist, his teeth look awful – and so is the smell of his breath. He has this air of superiority, although his looks do most certainly not justify such a feeling.’

Laughing at conservatives might be hilarious to liberals, but the typical characterization of the American liberal will also make the conservative laugh: ‘Oh, there we have this “blame America first” hippy, with his long, sleazy hair, his filthy looking beard and his undeserved sense of accomplishment when all he does is look like shit so as to annoy his rich upper-class parents.’

Then what does the socialist look like? As ‘socialism’ seems like such a terrible word to most Americans, many probably do not even have a cliché image of socialists. Perhaps to GOP-voters, the socialist wears little horns on top of his head while his face is covered in red paint. Or, to them an even easier picture might just be Barack Obama, who is of course nothing less than a disciple of Marx and Lenin!

Most Americans have no clue about socialism, because the United States never developed a proper socialist movement. We in Europe however have a lot of experience with this rather peculiar ideology. This is why political discussions between Europe on the one hand and America on the other, tend to end in ironic eye rolling. The Dutch use completely different words when it comes to describing conservatism, liberalism or socialism.

Walk up to Henk en Ingrid – the Dutch Joe Sixpack/The Plumber (and, to you ‘family value Americans’, an actual straight, white couple, not some random plumber!) – and ask them what their liberal looks like and they will give an answer that would astonish most Americans. They will probably say something like: ‘Yeah, liberals, with their fancy suits working for immoral banks, taking seventy euro haircuts as if it is nothing and being proud alumni of elitist sororities. Right wing motherfuckers!’ Right wing? Most certainly! Now probably, when you ask the Dutch about conservatives they will give a somewhat similar reply as Americans would, but their description of typical socialists is probably less ‘I-hate-the-system’-ish than that of Americans regarding liberals.

Mind you, it is not just ignorant Americans and ‘/care’-Dutchmen who do not understand this difference in characterization between our countries. The renowned American professor Charles Postel said, when I asked him about this difference: ‘Oh, it is very easy: what you call liberal, we call conservative.’ I bet our liberal VVD-party is thrilled to hear that they now fit into the Tea Party ranks of misogynist, homophobic, religiously obsessed, ignorant, latently racist hillbillies. In fact, liberals in both the Netherlands and America are progressive on ‘social issues’. It is the economic policy that sets the difference. What Americans tend to call liberals are in fact social liberals.

Now beware! Any American politician that is potentially liberal will crap his pants when he hears this: ‘Social liberalism! I ain’t no God hating socialist!’ Calm down and stop labelling! Socialism is of course a very broad definition, that also includes communism, but in the Netherlands we refer to social democracy, when we talk about socialism. And social democracy bears a lot of resemblances to American liberalism. Of course, especially in the radicalized political climate of the U.S. there might be gradual differences, but in essence it boils down to the same stuff: take away some negative freedom (doing whatever your please) to increase positive freedom (forcing people to do or not do certain things, to increase their real freedom in the long run).

Most Americans run for the hills when they hear this, but it is quite easy. Care to know why Dutch metropolitan areas with almost 1,500,000 million inhabitants are called murder capitals when in fact hardly twenty people a year get murdered? Twenty murders a year is already considered ridiculously high, simply because we do not allow citizens to carry semi-automatic guns. You take away some freedom to improve actual freedom. That is social democracy or American liberalism (and up until some extent Dutch liberalism or conservatism as well). Unfortunately however, American politics is so corrupted these days that few dare to propose restricting gun laws.

So now how about Dutch liberals? Surely it must be an oxymoron to talk about right-wingers supporting euthanasia, not criminalizing prostitution and advocating gay rights? Well, not really. Though it is true that liberalism was originally the opposite of conservatism, of the two words the latter is a very broad definition that includes all sorts of religious movements, but also secular traditionalists. It is not even necessarily right wing. With many Dutchmen being non-believers, it is liberalism – as opposed to social democracy – that is considered right wing. Liberalism is supportive of the free market, social democracy less so, just like American liberalism.

It is unfortunate that the political landscape of the United States consists of two parties who in essence feel the same way. Perhaps American politics would be less about slogans and image if they would fine-tune their definitions a little more. So I am very sorry, Bill Maher: though I applaud your appreciation for European societies, please do not treat all of us like socialists, for it diminishes the roles the different ideologies have played in shaping our – indeed – well functioning Dutch society! Maher lives in a world so far to the right, that even he feels that common-sense ideas that any Dutchman would acknowledge, are socialist. Perhaps so, if being sane were the equivalent of socialism, but many Dutchies would rightfully not agree!

So anyway, I forgot where I was going with this. I guess all I am trying to say to our American friends is the following: read some goddamn books on politics, you uncivilized barbarians!

Martijn Samson is a philosophy student living in The Netherlands.

Previous articleObservations: The Duality of the Dutch
Next articleThe Rotterdam Review (and it’s city initiative debacle)