The Dutch news yesterday evening headlined with the attempted kidnapping and threatening of Robert Serry, the Dutch UN special emmisary that Ban-Ki Moon assigned to Crimea as his ‘firefighter’. A group of armed men attempted to force him to accompany them to an undisclosed location. Later that evening it was confirmed that the kidnapping was unsuccessful and he was on a plane back to The Netherlands – and safety. This bizarre turn of events demonstrates just how seriously out of control the situation in the Ukraine has become.

In order to gain a, in as far as that is possible, objective overview of the situation and all its volatile and numerous facets I have tried to listen to and read about this subject. Not only through the eyes of the traditional Western media, but through other media outlets as well. Often the most objective and candid reports are made by amateurs – the men and women of the Ukraine who are posting footage from the streets. Certain things are simply not touched upon by the traditional media available to us in Holland. There are things that add nuance to this complicated story, and underpin my absolute belief that The Netherlands should stay well away from dabbling in this particular conflict. Various videos have been posted on, amongst others, LiveLeaks, that paint an altogether different picture of the Ukrainian protest leaders, than we have been fed in the West. They show these ‘protest leaders’ up to be gun toting thuggish far-right extremists who will not hesitate to turn to extreme violence to get what they want. Surely, this cannot be something the West will support? Snipers shooting down civilians at Maidan is just one example of the atrocities committed by the new coalition.

This is not as simple as Vladimir Putin flexing his muscles and being compared to a certain Austrian megalomaniac laying claim to his Sudetenland. The Ukraine is a divided country, not only by the great river Dnieper, but also into Ukrainian speaking and Russian speaking people. The ethnic Russians comprise only about 17% of the population but a far greater amount of people in eastern Ukraine are native Russian speakers, dividing the country clean in half along this linguistic and cultural border. Western and Eastern Ukraine have a different language, history, cultural identity and customs and it’s no news that they don’t always agree.

So what has changed?

It’s been almost 25 years since the 9th of November 1989, the day that the Berlin Wall came down, my mother’s birthday and the day my grandfather died. I remember this day so clearly for all of those reasons. To me as a young child it is a day that is etched in my memory. Something that I have in common with the former citizens of the USSR because that was the day that Russia’s humiliation began in earnest. In their eyes Gorbatsjov is no peacemaker, but a traitor who sold their soul to the devil. Yeltsin was a drunken clown. They have felt like an emperor fallen from grace, desperately trying to protect his dignity. Whatever they might dislike about Vladimir Putin – he has given them back some of their self-respect. He has made Russia matter again.

This is about pride. The most dangerous of the seven sins. The solution seems far away and the revolution will not be televised!

In all seriousness though, is it really so illogical that Putin should want to protect the Russians and Russian interests in the Ukraine? Is it really so disproportionate to what is happening? Who are we to guffaw loudly at Russia for invading a sovereign country when the West (yes ‘Merica I’m lookin’ at you!) has done worse in the last ten years, or so (Irak, Afghanistan)?

I don’t ask you to pick a side, I sure as hell am not, I ask merely that you realise that you need to ask questions. Don’t blindly assume a Cold War-esque US versus THEM position. Here’s hoping that The Netherlands stops trying to be ‘het braaftse jongetje van de klas’ (the teacher’s pet) and realizes it needs to keep out of this one.

For those of you that understand Dutch, I urge you to take 11 minutes and ten seconds of your time to watch this video of Maarten van Rossum’s take on the situation. Normally I find him a little dry, but he hits the nail on the head here.

However, all this being said we wouldn’t be DutchReview if we didn’t try to end this article on a humorous note. If this really is WWIII, we may as well have a good old chuckle whilst we still can! Here are some of my favourite 9gag memes on the subject: 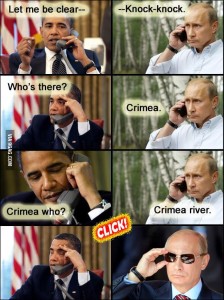 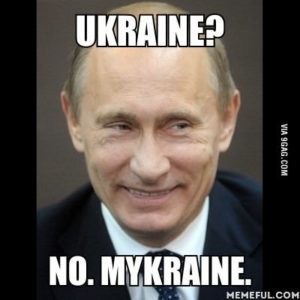 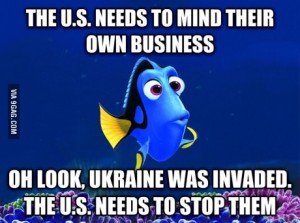