At 9:00am this morning the trial of the infamous Badr Hari (28) ‘kicked off’ in Amsterdam. He stands trial to eight counts of violent crime, and one serious traffic offence. An all-round intimidating guy, in and out of the ring, he is accused of a number of beatings. The most famous being in the early hours of the 8th of July 2012; Badr and his girlfriend Estelle Cruijff (yes, Johan’s neice) were partying in a Skybox in the Amsterdam ArenA during Sensation, a massive dance event held annually in that location. For unknown reasons the night ended with an unsuspecting businessman, Koen Everink, being beaten to within an inch of his life, allegedly by Hari and another man Ferhat Y. Everink was so badly beaten that he almost lost his left foot. A killing machine in the ring, Hari is well known for seeking out the limits of what is acceptable. With a reputation for being a hothead, sometimes reoffending within 48 hours of being released from prison, it’s not looking good for Hari. That being said, there were so many mistakes made by security on the scene and the police afterwards, that he might just get away with it due to a lack of admissible evidence. As KRO Reporter revealed in their documentary, many goofs were made with the forensics in this case. It remains to be seen whether Hari, one of the most talented and respected athletes in his field, will ever be able to rise above what happened on that fateful night. 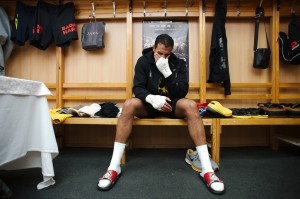 In other news today, the Dutch government is looking into the possibility of revoking the passports of convicted pedophiles. This would be to prevent them from travelling abroad to countries in for example South-East Asia or South America as sex tourists, with the intent of abusing children there.  Unfortunately pedophiles don’t all adhere to the stereotypical image of an overweight, balding, middle-aged white male with a creepy beard, wearing white socks in sandals and sporting large-rimmed eighties style glasses. So we need better ways of identifying these people and preventing them from harming any more innocent children. In my opinion, branding them on their foreheads would be a heck of a lot easier, but the Dutch government has a less invasive idea. They plan on implementing an international Certificate of Good Conduct so that pedophiles will be prevented from working with children elsewhere in the world after they have been convicted and banned from doing so in The Netherlands. This comes after a damning report by the National Reporter on Human Trafficking and Sexual Violence against Children revealed how easy it is for Dutch child abusers to reoffend over the border.

Exciting times in Groningen where for the very first time ever, something is actually happening! Groningen has really been suffering from earthquakes, the result of drilling for gas by the NAM. The most recent earthquake measured a staggering 2 on the Richter scale, with the heaviest one (in 2012) measuring a jaw-dropping 3,6!

A Japanese man last week did a fart that measured higher on the Richter scale, a baby in Pakistan took its first steps yesterday and caused more of a tremor, a woman in California picked her nose, flicked her bogey, and when it landed one metre away it resulted in a larger ripple effect than the ‘earthquakes’ in Groningen produced. Now a whistle-blower already compared to the likes of Bradley Manning (or rather Chelsea as she prefers to be called nowadays) and Edward Snowden, has spoken up – Mr. Adriaan Houtenbos. This retired ex-employee of NAM reveals that according to his calculations, the strength of these earthquakes in Groningen has been increasing by 16 percent every year since 2004. He accuses the KNMI, the Royal Dutch Meteorological Institute, and the NAM of covering up this information and deliberately misleading the good people of Groningen. The NAM deny this and claim they have always been and will continue to be open about information they have and emphasize they would like to talk to Houtenbos in person.

That’s all from the Low Lands for today! Now for the weather report:

Previous articleDaily Dutch News 09/10/2013: It’s a Small World After All…
Next articleThe New Shining: Wake Up Your Dreams