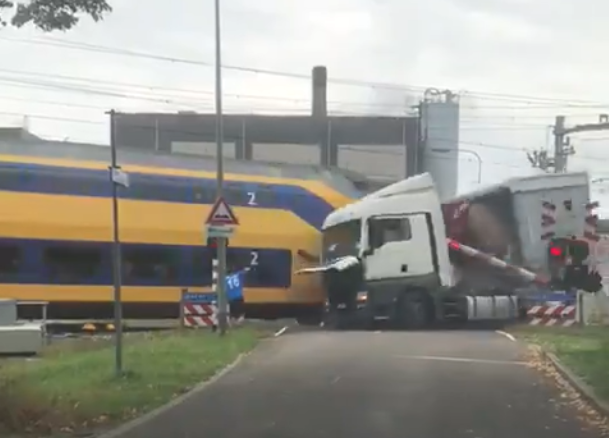 At 5pm yesterday, a train on route between Weert and Roermond in Limburg collided with a truck at an intersection. The train route will be shut down until at least 2pm today.

Police reported that the truck driver, who jumped from the vehicle before the collision, was unharmed. Two of the train passengers have minor neck injuries and are being cared for, but most of the damage was to the truck and train. Police are still investigating the cause of the incident.

Below is a video taken of the collision:

ProRail employees worked through the night to repair the damage, but the rail company reported that the damage is “greater than expected”. The rails, level crossing installation and the catenary portals were all extremely damaged and must be totally replaced, reports NOS. The train and truck of course received the brunt of the damage, and were removed from the scene last night.

As a result, no trains will run between Sittard and Weert until at least 2pm today. In the meantime, buses will be provided for passengers travelling through this region of Limburg.