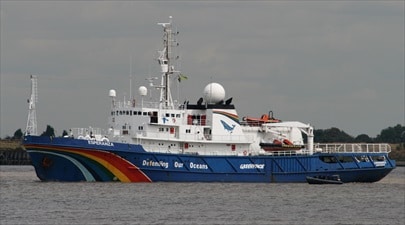 Greetings, fellow Dutchophiles. It is I, Frank, with you daily dose of Dutch news.

Yet another episode in the ongoing political tensions between The Netherlands and Mother Russia: video footage has been released of the Russian military unit that seized the Greenpeace vessel Arctic Sunrise in September this year. Masked commandos are seen repelling from a hovering helicopter, possibly singing the Soviet equivalent of the Team America theme song. Coming to us during that sensitive time frame when our King happens to be visiting Russia for a meeting with president Putin this very evening. Meanwhile, the Russian minister of Foreign Affairs, Lavrov, stated that the Dutch government is to blame for not preventing the Arctic Sunrise from entering into Russian territory. (Also, notice the rainbow in the last shot of the video. How’s that for subtlety?).

Thirty activists, two of whom are Dutch, were arrested and are still being held in Russian custody and awaiting trial to this day. Watching the images, I couldn’t help but be remembered of the disastrous Gaza flotilla raid in 2010, when Israeli commandos boarded a ship headed for Gaza. In the battle that ensued, the commandos killed nine activists. Fortunately, the Russian raid did not end in such grave tragedy, as the Greenpeace activists were prudent enough to immediately surrender as soon as they saw an army helicopter vomit out uniformed men carrying automatic rifles.

Speaking of ongoing tensions, it has recently been decided that the intocht of Sinterklaas will go on as tradition dictates. Sort of. Intocht, meaning as much as ‘arrival’, is the first stage of the Dutch Sinterklaas tradition, where thousands of children welcome the saintly bringer of presents as he boards his Pakjesboot (gift boat) at a harbor in a picturesque Dutch town. Despite even stronger resistance to Sinterklaas’ servant, Zwarte Piet, this year, this festivity will be celebrated as always, though with a few minor changes. Following the public discussion over whether or not Zwarte Piet is a racist caricature, the city council of Amsterdam decided that the Pieten will not wear golden earrings and that each Piet can choose to forgo the stereotypical red lips and frizzy hair, three characteristics of Zwarte Piet that are seen as offensive mockery of negroes by Zwarte Piet opponents.

Und alle Menschen werden Brüder. No on to the weather report: