This week, voters will head to the polls for the 2014 European election. In the lead-up to the election I’ve been on a mission to learn a thing or two about the European Union and the upcoming vote.

I was inspired by the other major European election earlier this month: the Eurovision Song Contest. Watching the entire contest was not easy, but I had to do it. It was a required step in my integration to European society. Watching the votes pour in from mobile phones across the continent, I had to wonder: will more people vote in the song contest, or in the EU elections? My bet was on the song contest.

Until that point I hadn’t given the European elections very much thought. As an American citizen living in the Netherlands, I’m an outsider to the EU and I knew close to nothing about it. I decided to change that. Starting with the basics, I began to fill in the gaps and think about the Netherlands in the wider European context.

Before I put you to sleep with politics, here’s some seventies Eurovision Dutchness for your entertainment:

On May 22nd, elections for the European parliament will begin with voting in the Netherlands and the United Kingdom. The voting will continue in the remaining EU member states until May 25th. The Netherlands will be the only country to publish exit polls, which will give an early look at the Dutch vote.

Despite the claims of some politicians, the economic crisis is not yet history for most Europeans. The Eurozone crisis that began in 2008 was a huge blow to popular support for the EU. A recent poll shows that support for the EU is still lower than before the crisis, but has started to improve. Despite the improved image of the EU, there is increasing resistance to giving more political power to Brussels.

Meanwhile, participation in the elections keeps on falling. Only 43% of voters turned up for the last elections, and that number is expected to drop another five percent this year. The country with the lowest expected turnout is none other than the Netherlands.

While a strong majority of the Dutch are aware of the election, only about 20% said they were planning on voting. What does this say about the Netherlands’ relationship with the EU? Well, it’s complicated.

One explanation for the low numbers is the huge disconnect between citizens and MEPs. Across the EU, there is much higher support for EU institutions among politicians than the people. And whether or not people are aware of it, the MEPs don’t go very far to represent the folks who voted for them. In fact, they have a responsibility to represent the “European interest” rather than their home country. The MEPs are also aligned in political groups that tend to vote the same way.

It’s not that the Dutch are apathetic about voting; turnout for their own elections is high. It’s just that they aren’t so interested in these elections.

The Netherlands and the EU

The Netherlands has a significant place in the history of European cooperation. It was one of the six founding member states of the EU, dating back to the 1951 Treaty of Paris. The European Union as we know it today came into being in 1993 with the Maastricht Treaty , signed in – you guessed it! – Maastricht. Of course this is only recent EU history. The Dutch relationship with the rest of Europe is deep and goes back centuries.

The EU took a major stumble in 2006 when voters in the Netherlands and France said “No” to a European constitution . All of the member states had to approve the treaty before the constitution could take effect. The French had already killed it three days earlier, so the Dutch referendum was just kicking it while it was down.

This put the Netherlands in an awkward position. This country helped build the EU, and now it was giving it the cold shoulder.

There is no simple explanation for the  Dutch “No” vote, but it boils down to this: the EU was changing, and a lot of people weren’t happy with the direction it was heading.

It was only in the last week or two that I’ve noticed campaign efforts from Dutch political parties. The first campaign poster that caught my eye was from D66, which reads simply: “Sterk Nederland. Sterk Europa” (“Strong Netherlands. Strong Europe”).

I decided to find out what the other parties were saying. For the most part, they fit in neatly with the political orientations of the parties. But when I got around to watching some campaign videos, something really interesting stood out: they’re selling competing images of Dutch identity in Europe.

Check out some of the videos, and don’t worry if you don’t understand the language. (Note: these are selected only for the statements they make about the EU, not for ideological diversity. I didn’t include any from the left-leaning parties such as SP or PvdA simply because I couldn’t find videos from them.)

This first one is from CDA (“Christian Democratic Appeal”):

Summary: This thing called the EU happened. Then it changed. Then some bad stuff happened. Now we should fix the bad stuff and keep the good stuff.

Message about EU: NL was here from the beginning and should stick around. Nothing too controversial.

This one is from the VVD (People’s Party for Freedom and Democracy), the party of prime minister Mark Rutte:

Summary: The EU works because now we can go shopping in former Soviet republics.

Message about EU: Around 0:50 in the video, he says (translated to English): “How do we make one fist against Putin?” I’d say that’s a pretty bold statement. I would be a little more cautious, personally: 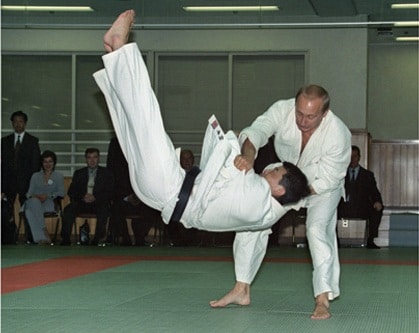 Well, there you have it. Who knew elections could be so much fun?

Previous articleSummer Concerts In The Netherlands
Next articleRemember 1953: Help the Balkans!