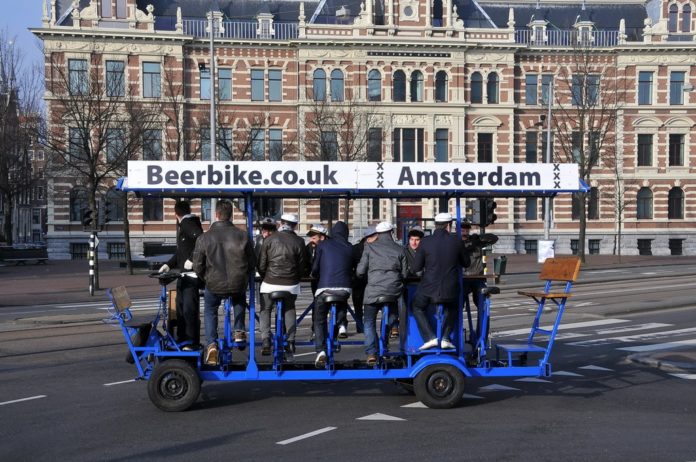 You thought it had gone away. You thought the biggest news story of Amsterdam had finally fizzled out. But no. It has once more reared its ugly head. I am talking, of course, about Amsterdam’s era-defining beer bike ban (aka bierfietsverbod)

First of all, some definitions. The beer bike or bierfiets is a variation of the much less objectionable ‘group bike’ or groepsfiets. This is defined in Amsterdam’s Local Ordinance as ‘a bike which is propelled by one or more persons through the means of pedalling, upon which three or more persons in addition to the driver may choose to be seated for a fee’.

The bierfiets is a subtle deviation from the groepsfiets, and is the same in almost every way, except that it includes a mobile bar, and the passengers are all drunk, noisy, often in fancy dress, and almost never Dutch.

These happy, obstreperous tourists career around the city centre of Amsterdam on their beer bikes, spreading joy, body odour and vomit among the local populace. I recall a couple of entertaining hours outside a restaurant on Westermarkt, watching a steady stream of beer bikes lurching by, and admiring the high spirits of the belching, swearing, farting passengers.

It is hard to imagine why the mayor of Amsterdam (we miss him) wanted to ban these fun-loving ambassadors of good cheer from the historic city centre (spoilers: good taste and being a great mayor). But apparently he did, and he was hoping to impose a beer bike ban or bierfietsverbod (somehow it sounds scarier in Dutch) starting from 01 January 2017.

Dramatically, the mayor found himself being taken to court over this draconian measure and the mayor was ruled not to have taken the needs of the bierfiets industry (a cornerstone of the Dutch economy) sufficiently into consideration, and the beer bike ban was struck off.

Over the past months, former Mayor Eberhard van der Laan and the municipality worked hard to motivate their  bierfietsverbod and on Tuesday the Dutch court ruled that the ban can be implemented. The city of Amsterdam gave a thorough explanation on how the problems caused by beer bikes – shouting, public drunkenness, and rowdiness (we made that up), among other things – are concentrated in one of the busiest parts of Amsterdam and thereby also affects public order (which is judge talk for Dutch people hating those drunken tourists)

So no more beerbikes, what will be the next big/stupid thing?

Previous article5 Most Interesting Places to See in the Netherlands
Next articleTrump, Wilders and Baudet – Geert Wilders isn’t doing so well anymore and this is why