Scared of spiders? This year the spiders in the Netherlands are looking enormous!

Spiders in the Netherlands

Okay, so I’m guilty of reading a few clickbaity articles about how there will be more enormous spiders in the Netherlands this year because of the prolonged heat and lots of flies and mosquitos around to eat. I didn’t want to believe it, but it does make total sense. I’ve seen a couple of huge ones already, leading me to literally cry my eyes out until it was removed. But for Sheena, the giant-spider-in-the-house-day arrived.

I’m part of the Facebook group Expats in The Hague and her post caused quite a stir when she asked if what she found in her home was some monster spider or a bat.

I happened to see it when it first went out and me and my partner were trying to work out which one it was. Us, along with most others said it must be a bat (I mean it MUST be, right?)

If you can’t cope with the sight of giant spiders, look away now. 😉

This was swiftly followed by another post from Sheena… 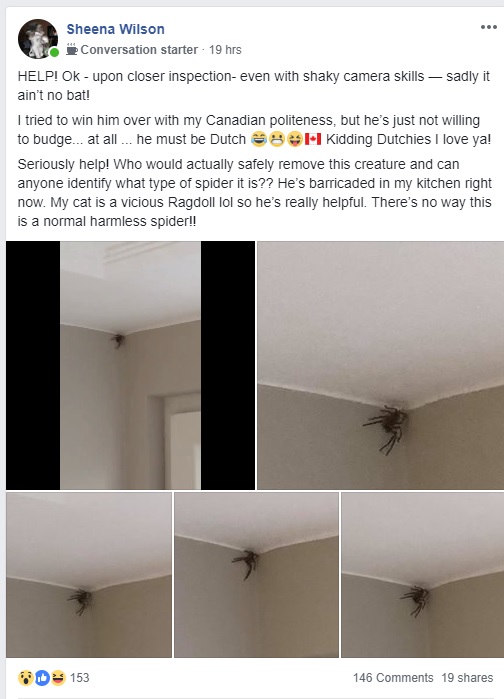 It was a spider! In the end with the help of the expat community (who named him Steve) and who were completely understandably freaking out about the whole situation, she called the dierenambulance in case it was a dangerous or rare spider. Everyone was hoping it was at least one of the two, so we can be ensured it’s not a normal thing, but according to the dierenambulance, it’s a regular ol’ spider. They picked him up and put him back outside.

The spider, Steve, was not around to be interviewed unfortunately, so we aren’t sure where his next destination will be. All we know is that spiders like this do exist and for all of us terrified of them, we can only hope that Steve and his friends don’t wander into our safe space (you hear that, Steve?)

Have you spotted any big spiders in the Netherlands already? Let us know in the comments!

Imagine this: you're walking across Dam Square while the grey masses of pigeons casually trip around you, as usual. Then,...