Awaiting the new Ayreon album: “Theory of Everything” Alright, before we get this article going, I want to go DISCLAIMER on my audience and admit to the following things: though DutchReview is topical, exciting, informative, the better than a roller-coaster blow job, and the epitome of digital journalism gone proper (don’t argue!), I never have and never will claim that we are an objective, tell-all-sides platform. The reason I’m telling you this is because it’s impossible for me to be even close to objective about the next subject: which is Ayreon, and more importantly, the recent news about Ayreon’s upcoming new album.

For those who knoweth not, Ayreon is a (sort-of) one-man project by a Dutch musical millipede named Arjen Anthony Lucassen (his instruments include acoustic/electric/bass guitar, flute, The Almighty Hammond, synthesizer, mandolin, didgeridoo, and God’s sense of musical harmony). He also runs a legion of side-projects, but unless you are operating from a NASA supercomputer right now, the full list would probably make your processor commit suicide. On a completely related side-note: he’s also freakishly tall, towering over us mere mortals at 2.02 meters (that’s about 6’7″). And I said “sort-of” one-man project because Lucassen has received hordes of guest musicians in his studio. The line of artists who are waiting to join in can almost be observed from space. Previously, Arjen has been supported by rock and metal juggernauts such as Sir Allen Russel and Michael Romeo (Symphony X), Mikael Åckerfeldt (Opeth), Bruce Dickenson (Iron Maiden), Eric Clayton (Saviour Machine), Hansi Kürsch (Blind Guardian), James Labrie (Dream Theater) and Barry Hay (Golden Earring). I could sum up the music that is Ayreon for myself, but he already did a damn fine job at his own web-site. So I’ll simply quote: “Musically, Ayreon albums tend to be characterized by extreme opposites: brutal guitars cut to lighthearted mandolins, classic roaring Hammonds collide with screaming digital synths, and dark death grunts battle angelic celtic voices.” (source).

I can still remember my first doses of Ayreon: some five years ago, a friend of mine was giving away double records or pirate copies to his guests and I walked out of the door with two grey discs (sorry Arjen, I promise to make it up to you) containing Into the Electric Castle. This album, released back in 1998, more or less marked Ayreon’s break-through into the better known spheres of progressive rock. Featuring a host of singers and spanning two CD’s, it told the story of eight souls from various epochs in human history who are abruptly snatched up into another plane of existence by a nebulous force, each having to face a dark side of themselves. It’s sort of like The Wizard of Oz on acid (more than it already was, I mean) in the form of a self-confessed B-movie space metal opera. After having listened to this album over and over and over again, I rushed out of my house to buy whatever Ayreon album I could find, most notably The Human Equation (2004) and The Universal Migrator (2000).  If I would ever recommend a rock/metal album to anyone anywhere, it would be The Human Equation, which is not only a shining example of cross-genre music and lyrical genius, but also the heart-rending story of the conflicting drives, barriers and turmoils of our internal lives. Again spanning two discs, it musically displays the internal dialog between a comatose man and his repressed emotions and mental faculties (to be precise: Love, Passion, Pride, Fear, Agony, Rage, and Reason) each of which are personified by a different singer. It is an emotional powerhouse that speaks of mistakes, regret, fears and hopes; the classical redemption story that nevertheless escapes being a mere cliché. Have a taste of it right here. But after being treated to 01011001 (2008), another glorious exposition that is to be the finale to the story of FOREVER, the aforementioned nebulous force that seeks contact with human life to regain its lost capacity of experiencing emotions, a long silence followed.

Until now. Already half a year ago, Arjen Lucassen announced the forthcoming of a new album, and last week he revealed its title: Theory of Everything. This alone promises that Ayreon will continue right where it left of: with transcendental experiences and intergalactic odysseys, the entire spectrum of human emotions translated into songs with dazzling guitar solos, soothing ambient tracks and mind-bending compositions. We at DutchReview salute you, Arjen Lucassen! 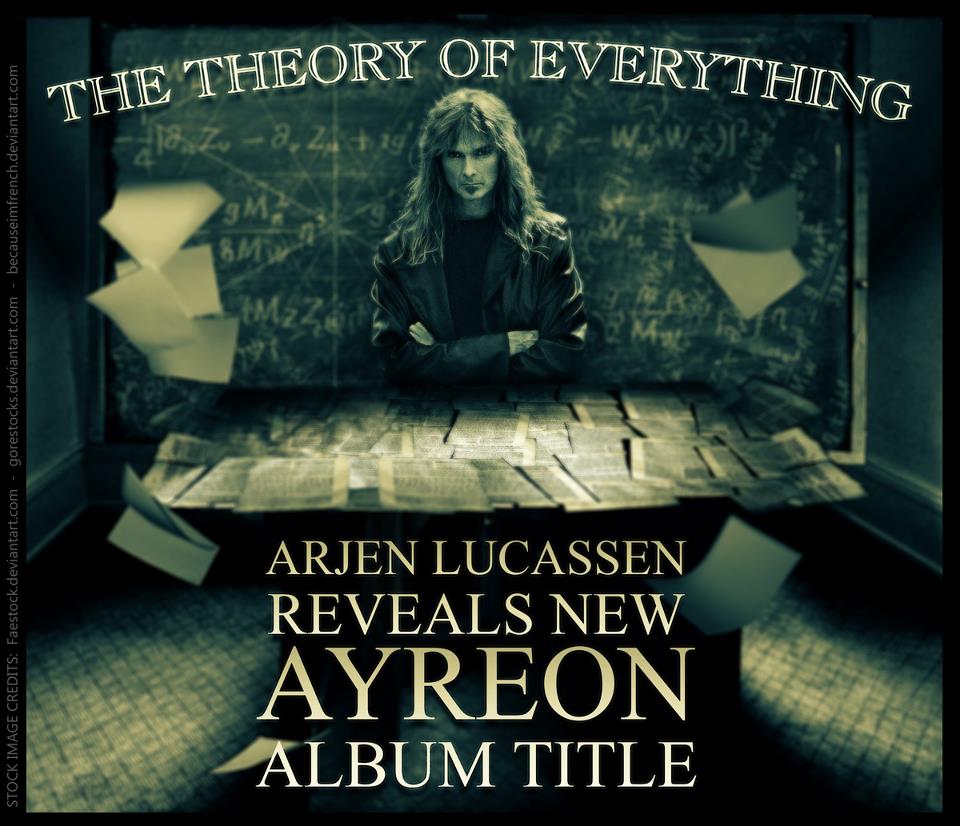 So long story short: after a five year hiatus, there is finally a new Ayreon album coming out, and as it looks now, this will be somewhere around the fall of this year. Don’t miss out!