Blast From The Past: ‘De Lift’ 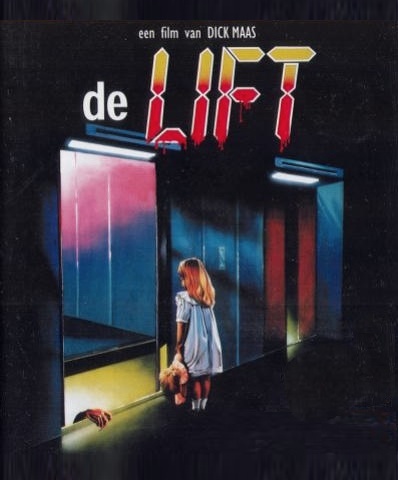 This year, one of the best-worst of all Dutch movies turned thirty! Those who excel at being Dutch already know what this article is talking about: the 1983 horror cult-classic De Lift (‘The Elevator’). It is a movie about an elevator that goes absolutely nuts after its electric circuits got struck by lightning, or radioactive radiation, or whatever (the movie itself isn’t entirely sure just what the hell happened). Despite being released amidst a tsunami of sci-fi books and movies about machines becoming self-aware and murderous, even this was a rather lazy explanation for an elevator that decapitates people at random. Every single one of the elevator’s kills are equal parts hilarious and equal parts disturbing. With its bizarre premise and its rather goofy, but somehow strangely captivating low-budget execution, De Lift got ranked as #2 in the cracked article The Five Most Half-Ass Monsters in Movie History, stating the obvious fact that this movie is entirely based on a threat that can be avoided by simply taking the stairs. An English remake, entitled Down, was made in 2001, but it failed to impress people because it simply lacked the unintentional comedy that the original tech-slasher had.

Fun fact: while directing the video for the Golden Earring’s classic hit-song When the Lady Smiles, Dick Maas made couldn’t resist making a reference to De Lift. Halfway in the video, we see Barry Hay (Golden Earring’s lead singer) chasing an attractive secretary in an office building. Before she can flee into an elevator, we see Huub Stapel leaving the adjacent elevator, looking confused (skip to 3:20 for nostalgic awesomeness).

De Lift would end up securing its place in the canon of Dutch cinema and thanks to the wonders of the Internet, everyone is free to expose themselves to this delightful awfulness. For the ultimate experience: you can watch the entire ordeal with Italian lip-synch. Enjoy!

Previous articlePrince Friso dies after Skiing-accident and Coma
Next articleShell, victim of Crime or Karma?

Edibles in Amsterdam: the ultimate guide [2022]

Welcome to our epic guide to edibles in Amsterdam in 2021 (and yes, we're telling you where you can get...