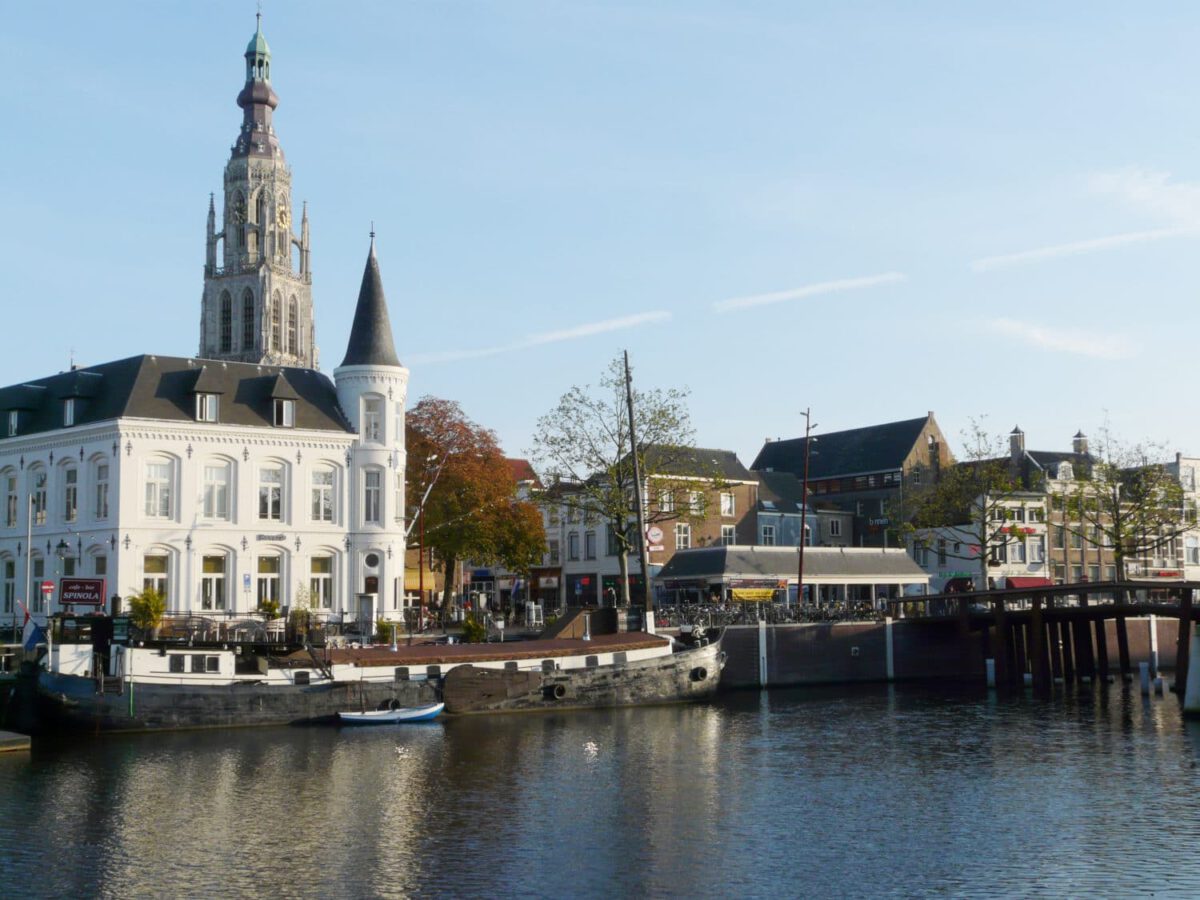 Although I was born in Amsterdam (which is still one of my favourite cities in the Netherlands) I’ve come to love other cities and towns as well. One of them is the medieval city of Breda.

Few tourists ever visit Breda, which is a beautiful and historic city.  It dates back a thousand years when it was only a tiny fishing village with one herring stand. Located in the province of North Brabant bordering on Belgium, Breda should be on anyone’s list of places to explore in the southern part of the Netherlands.

Breda on the world stage

Breda has made its mark on world history, not only because its located on the river Mark, but because the city, known as the Nassau Stad, was the official residence of the Orange-Nassau family for several centuries. The current Dutch king, Willem-Alexander is a descendant of the House of Orange-Nassau. The Nassau branch of the family can be traced back to the 11th century in western Germany.  Since its humble beginnings, Breda has been at the centre of major world events that involved the Holy Roman Empire, feuds with neighbouring dynasties, intermarriages of the nobility to consolidate real estate, the establishment of the Dutch Republic, wars between the Netherlands and England, Spanish and French occupations, and of course, the German occupation in WWII.

Having been granted ‘city rights’ in 1252, Breda was allowed to build its own city wall to keep out illegals and greedy slumlords. It has been a fortified city throughout the centuries ever since. Many of its medieval remnants can be seen today within the heart of the city. One of those heady locations is Kasteelplein (Castle Square). Following many nasty onslaughts on the Castle of Breda by enemies of its inhabitants, the losers were beheaded on the square in view of the celebratory bystanders, or the winners, eating picnic lunches.

Breda is a lively city for going out and having a good time. Surrounded by a moat, the city’s centre is very walkable and saturated with more than 300 restaurants, cafes, bars, clubs and entertainment venues. It is also a shopper’s paradise with hundreds of stores waiting for you to buy stuff.  For relaxing after a day of shopping and eating, the city has many green spaces for chilling-out and wandering. The city is officially recognized as having the best city centre in the country.

Starting at the newly renovated central train and bus station, it’s a short walk to Park Valkenberg where you can stroll through a large beautiful park replete with a stately fountain, a restaurant on a knoll and several ponds for pondering.

One thing you may like to ponder is the name of the park itself. In the 15th century, the preferred sport of the aristocracy was falconry. In this sport, a big ferocious bird — a falcon or valk — was trained to hunt and kill peaceful songbirds. These falconers stood on mounds or hilltops to show off their importance. Since many falcons were housed at this location, the landlords, over time, adopted the House of Valkenberg as their family name and pedigree. So, that’s how Valkenberg Park got its name.

Moving on, at the Catharinastraat exit of the park there is the Begijnhof, where, starting in the 12th century, a small community of pious Catholic women established a sanctuary. Their lives were devoted to God and to herb gardens, though not necessarily in that order. Breda’s Begijnhof is one of the oldest in the Netherlands.

The original little wooden houses with clay insulation and straw roofs were gradually replaced by brick houses in the 16th century that can still be seen today. Later, amenities were added such as a free laundromat and Japanese toilets. Although several elderly women still live there today, it can be viewed by visitors. At Catharinastraat 29 there is the Begijnhof Museum where the women’s simple and sober lifestyles over the centuries are on display.

READ ALSO | Religion in the Netherlands: a perspective on the different religions in the country

Originally a fortress, Breda Castle was renovated in 1353 to look more like a castle with fortifications, four towers and a moat.  A castle can’t be called a true castle without a moat. A moat is essential. Since the 14th century, the castle has been the home of Breda’s many nobles, including William of Orange (a.k.a. William the Silent).  William is considered the George Washington of the Netherlands because he led the Dutch Revolt to liberate the Netherlands from the Spanish occupiers.  Even though he was born in Germany and spoke mostly French (which is why he was silent around Dutch speakers) he is still considered a hero and the father of his country. When William was assassinated in 1580, he should have been buried in his ancestral hometown of Breda, but the Spanish occupied it at the time. He was buried in Delft instead.

If it wasn’t for the Treaty of Breda, New York’s Times Square would have been called ‘Tijden Plein’.  This year, 2020, marks the 353rd anniversary of the Treaty of Breda. This Treaty was signed in Breda on July 31, 1667.  It ended the Second Anglo-Dutch War (1665–1667), during which England and the Netherlands fought over maritime domination and world trade. The Treaty of Breda gave the British the town of New Amsterdam, which they changed to New York.

The nobility lost interest in staying at the Castle and stopped living and vacationing there. The South of France looked better and it was warmer. So, since 1828 Breda Castle has been used as a military outpost and academy, except during WWII when the Germans occupied the fortress for nefarious purposes. The castle is open to the public once a year on Brabantse Kasteeldag (Open Castle Day) in the spring.

The Spanish Gate is an imposing water gateway to Breda Castle. It was built in 1610 to commemorate the liberation of Breda in 1590 from the Spanish when a small band of Dutch soldiers entered the heavily protected garrison by hiding under a cargo of peat. Peat is composed of partially decayed vegetable matter that is cut and dried for use as fuel. The Trojan horse style operation was a smelly success. It’s debated whether the enemy died from battle or from the smell of the marauders. In any case, they opened the gates of the castle grounds and the liberating army won the day.

Every year the Spanish Gate is the backdrop of the main stage for Breda’s annual Jazz Festival, the oldest and largest festival of its kind in Europe, attracting as many as 250,000 visitors. There are about 175 gigs performed on large and small stages throughout the city on streets, squares, café patios, backyards and terraces. All of the outdoor concerts are free.

Breda’s harbour is lined with numerous restaurants and outdoor terraces overlooking the waterfront with a quay on each side to moor boats.  Various watercraft can be rented and boat tours around the city are also available there. During celebrations of one kind or another, the harbour is filled to capacity with boats of all kinds, including rubber rafts.

The majestic gothic-style Onze-Lieve-Vrouwekerk (Church of Our Beloved Lady) is the largest monument in Breda, and it towers over the Grote Markt (Large Square). The old church’s first stone was laid in 1269. Construction began in earnest in 1410 and was totally finished in its current form in 1547 after some mishaps like a tower collapsing and a fire. Twenty years later the Protestants took over the property during the Reformation. The 16th-century church organ is one of the largest organs in the Netherlands. After several restorations, renovations and religious conversions, the church functions today as a museum, and a venue for events from weddings and trade fairs to concerts.

The square is alive with the sound of music and good times. It’s lined with a wide variety of restaurants, cafes, bars, plenty of nightlife. There is a spot for every taste and lifestyle. Open markets on the square are between 9:00 am and 1:00 pm on Tuesdays and Fridays. On Friday and Saturday evenings there is always a festive atmosphere, regardless of the weather.

The shopping district is considered one of the best in the Netherlands. It consists of several streets tied to the centre’s ‘piece de resistance,’ De Barones. It’s an enclosed luxury shopping centre with its newest anchor store, Hudson’s Bay. Hudson’s Bay is a Canadian department store dating back to 1670 as a trading post, trading furs with the natives for pots, pans, blankets and hockey pucks. Today, the chain of 90 department stores operates exclusively in Canada and the Netherlands. Koopavond (Shopping Evening) in downtown Breda is on Thursdays when the stores are open until 9:00 pm.

Several places just outside the city proper are of interest and fun to visit. Five-hundred year old, 570 hectares (1408 acres) Mastbos is a favourite for walking, bicycling and horseback riding. It is one of the oldest conifer laden forests in the Netherlands. At the edge of the Mastbos is Kasteel Bouvigne (Bouvigne Castle) that was built sometime in the 16th century. This iconic brick building is surrounded by a wide moat and can only be entered by a stone bridge. It’s had a lot of residents over the centuries, some used it as a summer cottage. The French-English-German style gardens can be enjoyed for free.

Breda has a number of museums and theatres. Out of the nine museums, the Beer Advertising Museum is probably the most unusual. It houses over 1000 beer-related advertising signs and antique posters from throughout Europe and the UK. It’s open on Sundays. Entry is free but the beer is extra, including the foam.

The Chassé Theatre is one of the largest theatre complexes in the Netherlands. It has three theatres, three cinemas, three restaurants and a gallery. Each year the theatre hosts more than 350 theatre performances, 5,500 film screenings and 100 business events attracting 300,000 visitors.

Have you visited Breda? Are you planning to? Let us know in the comments below!

Editor’s Note: This article was originally published in September 2017 and was fully updated in October 2020 for your reading pleasure.