Storm batters the Netherlands – here’s the update on your plane, fiets and train 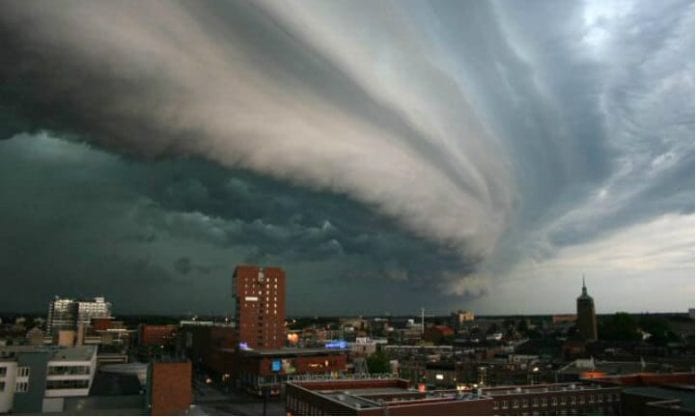 The first Western storm of 2018 is moving across the country. Especially in Zeeland, Zuid-Holland, Noord-Holland and Utrecht, the wind was already strong last night, but as far as we know, this did not lead to major problems. The traffic in the morning rush hour was also not very disrupted, also because the wind temporarily stopped. Moreover, because of the holidays its quiet on the roads. However, there of course some troubles like traffic on the A20 near Rotterdam and on the A28 near Groningen that suffered from water that on the road. And the Oosterscheldekering, the Zeelandbrug and the dike at Enkhuizen-Lelystad are closed to cars with trailers.

But all in all not bad for a first storm! I guess there were probably still tons of Dutchies just cycling to work (hair all messed up)

On the coast this morning wind force 9 is expected, maybe 10. In the course of the afternoon and evening the storm lingers. The KNMI has proclaimed CODE YELLOW for the entire country due to very heavy gusts of wind. People report the first storm damage on social media.

The NS operates according to their normal timetable, how unexpected! However, there are no trains running on the high-speed line between Rotterdam and Breda until at least 1 pm and no intercity trains operate between Dordrecht and Breda.

Yesterday it was already known that as a precaution over a hundred flights to and from Schiphol were canceled, so better check your schedules if you have any flying plans.

Other European countries are also suffering from the storm. Especially in Great Britain, Belgium and France the wind is blowing hard until tonight. There are no reports about victims and the damage is not too bad, correspondents say. In Britain, however, there are thousands of households without electricity and at the Eiffel Tower in Paris a gust of wind of 144 kilometers per hour was measured last night.

Previous articleBig Storm coming tomorrow! Flights at Schiphol are cancelled, trains will be delayed!
Next articleCODE ORANGE – The height of the storm is coming now!