As we all know, the housing situation in the Netherlands (and especially in the student cities) is dreadful. The demand for places to stay is so high that many rooms/apartments that wouldn’t be suitable for human life are assaulted by requests.

According to Het Parool, this is one of the reasons why the UvA will try to reduce the number of international students in the following years. “Why open the doors to new students, if you’re not able to take care of the present ones?”, asks Lauder Ivens, alderman for housing. Sad, and avoidable if sufficient housing plans by the municipalities and the universities were put in place.

The other reason is that some studies (*cough Psychology cough cough International Relations*) are so full with non-Dutch students (and mainly German and Chinese ones) that the locals are becoming a minority, and they’re having difficulties – given that even bachelor studies are taught in English and not in Dutch.

According to a research by Nuffic, 15% of the students at UvA are internationals, and among freshmen this number goes up to 25%. The Netherlands attracted more than 100,000 international students last year, of which Amsterdam alone welcomed 10,000; a fourth of them stays after their studies. An influx greeted with cheers by the universities, since the internationals billed around 1.57 billion euros, given the higher tuition fees (if outside the EU). 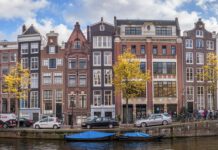 A tale of survival: living in a tiny apartment in Amsterdam