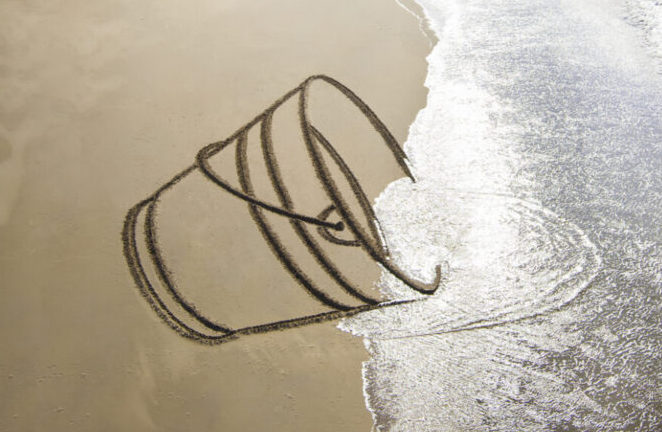 Enormous sand drawings and sculptures have been popping up all along the Dutch coastline, thanks to the handiwork of artist Nico Laan.

Laan loves playing with perspective and optical illusions, incorporating a technique known as anamorphosis. On the ground, his works may appear random and confusing, but when photographed from the air Laan’s unique vision comes into view.

It all began when the art teacher took some of his school students out to draw in the sand on the beach. “One of the students drew a cube that seemed to stand out from the rest of the work,” he says. This gave him the idea to explore how far he could take the concept of anamorphosis himself.

His first sand drawing went for a “pop up” look, playing with illusion and dimensions. The drawings take between four hours and three days to complete.

The width and position of each line must be carefully planned out beforehand, which Laan does on his computer. Once at the beach, he uses ropes and measuring equipment to realize his design on a much larger scale.

“I don’t want to bring other materials into it,” he says. “I only move and change the elements that are already there.”

Initially, Laan believed his pieces would be destroyed once nature had had its way. But after seeing how his pieces changed and remained visible after becoming submerged underwater, he began designing works to intentionally change with nature.

Next time you’re visiting the Dutch coastline, keep your eyes peeled! You may just spot one of Laan’s sand pieces.