A proposal to build a tunnel with a giant spiral entrance connecting Amsterdam Central Station and Amsterdam Noord could not only solve an increasing traffic issue in the area, but also give cyclists a taste of a real-life video game level.

For residents of Amsterdam Noord who rely on ferries across the IJ-river to access the centre of Amsterdam, congestion has become an increasing headache. Skyrocketing popularity in the area has led to full ferries, while transport strikes have marred residents ability to cross to the centre. Amsterdam has been forced to consider alternative solutions.

Public and expert opinion has been divided on whether to build a tunnel under or a bridge over the IJ for years. This proposal, by architectural firm Syb van Breda & Co, suggests a newly-designed tunnel that won’t leave cyclists gasping for breath at the end.

The ‘IJ Klopper‘ tunnel relies on a spiral system with a 50-metre wide drum on either end. The advantage to the tunnel is that the spiral allows only a gentle slope as cyclists wind their way up or down. That means less exertion, less red faces, and less sweat — a.k.a win, win, win. The fact that it resembles a Mario Kart race? We’re counting that as a win as well.

While the tunnel was originally proposed in mid-2019, the Amsterdam council has been slow to move on making a decision. However, public pressure is mounting on the council to find a solution. The current pandemic has exasperated matters further, with ferries now only able to transfer 20% of their actual capacity in an effort to preserve social distancing.

“There still is a stranglehold on the political level, but I have a very strong feeling that it will move toward a tunnel,” architect Syb van Breda, creator of the IJ-Klopper, told DutchReview. Van Breda says the project has garnered big interest from the Amsterdam harbour and Rijkswaterstraat.

Since the original plans were released, an important change has been made. A proposal to move the cruise terminal could result in the IJ River reducing its depth (hello Netherlands, masters of water!).

While the IJ River is currently 11 metres deep to allow for cruise ships to come in and out, removing cruise ships from the equation could reduce the depth to just seven metres. “That means the entire project should be able to be moved up four metres,” explains Van Breda. “That’s a significant difference for a cyclist because they don’t have to make all these loops down to a very low level.”

Apart from the joy of a giant spiral, there is another even more alluring factor to the tunnel: it’s cost-efficient. “A tunnel is three times cheaper than a bridge over its lifetime,” says Van Breda. While building the bridge, it’s 50% more economic, and this becomes even better over a longer period. And, if the river is lowered, the construction work also doesn’t need to go so deep. That’s more cash that can be spent on other great Amsterdam projects.

What do you think of this proposed option? Tell us your thoughts in the comments below!

Feature Image: Syb van Breda & Co Architects/Supplied
Editor’s Note: This article was originally published in July 2019, and was fully updated in June 2020 for your reading pleasure. 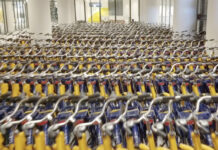 Second-largest bike garage IN THE WORLD opens in The Hague (see inside!) 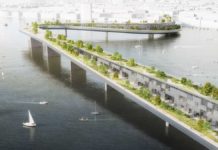