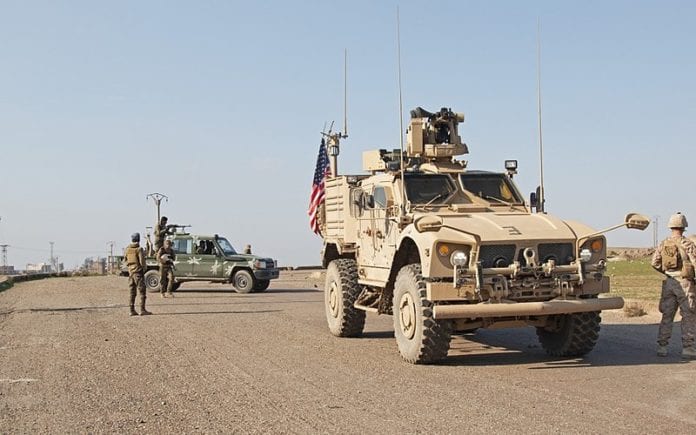 Sad times for the Middle East and world peace once again as the Turkish army has been attacking northeastern Syria and the SDF since yesterday morning. This area was under the control of Kurdish forces, who played a major role in beating Isis. Most Dutch people and politicians are also shocked by Trump’s betrayal and Turkey’s cynical attack.

Turkish troops were able to enter the area due to a shocking withdrawal of American forces, as a result of a phone conversation between Trump and Erdogan on Sunday. During this conversation, Trump betrayed the Kurds to Erdogan. Since then the world has expressed its disgust at this act of betrayal.

Yesterday there were airstrikes and artillery barrages aimed at previously US-backed Kurdish forces by the Turkish army, as they advanced into the area. According to the Syrian Observatory for Human Rights, eight civilians were killed. The Kurds have been a critically important ally for the West in the fight against Isis, and even now guard most of the prisons with Isis members in them.

Not a clumsy tweet, or a distasteful joke, or a shady business deal. Just a deliberate, calculated betrayal of an ally; leaving them to be massacred in exchange for a few votes in the Rust Belt. Shameful. https://t.co/qmqgTGokat

Trump is a traitorous idiot

Trump mildly criticised the assault, releasing a statement saying, “The United States does not endorse this attack and has made it clear to Turkey that this operation is a bad idea.” However, as usual, Trump had a quick change of heart later in the day. He justified allowing Turkey to attack the Kurdish area by saying the Turks and the Kurds had been fighting each other for centuries, and “[The Kurds] didn’t help us in the second world war, they didn’t help us with Normandy … but they’re there to help us with their land.”

The Kurds did not have a government to provide formal support during World War II. This is because we went back on our word to give them their own country after WWI, and instead divided their population into three separate countries, with a minority status in each country.

The move has been widely criticised, both within the US (by both Republicans and Democrats) and in the global community. The UN Security Council will meet today to discuss the invasion, but their response is probably not going to be in the Kurds’ favour, as both Russia and the US support Turkey. The Netherlands has condemned Turkey’s actions, with the Minister for Defence, Ank Bijleveld, saying that Turkey is taking “irresponsible risks” with the safety and stability of the region.

I condemn Trump's reckless decision to abandon our Kurdish allies to their fate at the hands of Turkish President Erodogan.

The President of the United States should not make significant national security decisions impulsively, by tweet, after a single phone call. https://t.co/WvY6U4HVo6

We must do more for the Kurds

Kurdish people in the Netherlands are planning a week of protests in response to the attacks, and to Trump’s withdrawal of support to them. Demned, an organisation of Kurds in the Netherlands, will be demonstrating at the Malieveld in The Hague on Saturday. They want the Dutch government to take concrete actions in defence of the Kurds in North-East Syria, rather than just talking about it. A spokesperson for the group says, “talking about it is what is mainly happening now. But that doesn’t scare Turkey.”

Dutch MPs have said on Monday that Europe must do everything in its power to stop the offensive, and some MPs are now discussing the imposition of economic sanctions on Turkey. This is unheard of, as Turkey is a part of NATO, and therefore officially an ally of the Netherlands. They fear increased refugee flow from the area, as well as a revival of Isis. The Dutch Foreign Minister Stef Blok has summoned the Turkish envoy, as well as condemning the invasion.

The EU has also condemned the invasion and urged Turkey to halt it, saying that the idea of establishing a safe zone to which refugees could return was unlikely to become a reality.

Trump might be a traitorous moron and Erdogan a vicious dictator. But the Dutch, French, British, Germans and all other politicians who now are all about sanctions and ‘condemning statements’ which never really came through for the Kurds.

Even when the US asked them to put troops on the border between Syria and Turkey, the Europeans sleazed their way through all kinds of political talk in order not to commit serious military resources to defeating Isis and protecting their brave Kurdish allies. And even now you can count on them doing nothing, maybe a economic sanction here and a nice new hospital for Kurds there, but nothing that will significantly help the situation there.

The Netherlands might be even worse hypocrites than the other European nations, as they’ve actually helped out the jihadist-groups that are now aiding Turkey with their invasion.

Still, Europeans showing no backbone is nothing new and doesn’t make the betrayal of the Kurds by Trump (or Erdogan’s attack) any less of disgrace.

As always with any war nowadays, this is also an online narrative-battle. Show some support with the #TrumpBetrayedTheKurds hashtag, or mail or tweet to your local politician.