All Aboard the Innovation Train: NS Brings Drones into Stations 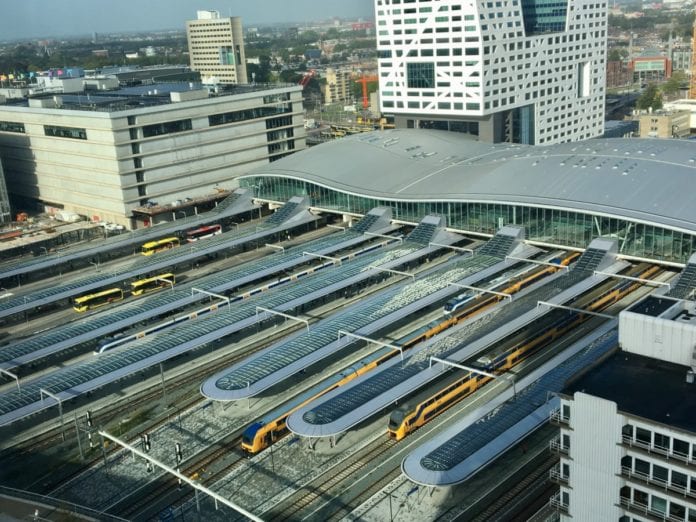 The Dutch public transport company NS is making headlines again this week after introducing a particularly innovative solution to checking their buildings: drones! NS has permission to make professional flights on the inside of stations and other buildings after two test flights were successfully completed in Utrecht last month.

The company has to inspect hundreds of structures, including stations, parking garages, bridges and offices for damages such as rust each year. The work was previously completed by erecting cranes and scaffolding, all which cost time and big stacks of cash.

So how did they come with this solution?

One NS employee illustrated that brilliant Dutch innovative spirit with a brainwave: drones.

“It is a lot less hassle to fly with a drone. You can do such a flight at quiet moments, which means less nuisance for travellers,” NS spokesperson Erik Kroeze told NOS.

While there is only one drone available now, two more are on the way. So far NS has two staff members licenced to fly the sky beasts.

Of course, it’s all been supremely well-organised. Not only have NS received permission from the government for outside areas, with inside permission on the way, but the company has already addressed privacy concerns.

“We explore the terrain in advance, turn off the flying area and indicate with signs that recordings are being made,” NS drone pilot Remco Bunder explained.

“If during the flight it appears that there are people on the recordings, these recordings will be deleted or the people will be watched. The images are then stored in a well-protected environment.”

Will there be any benefits for travelers?

Let’s be honest – nothing huge. No longer needing huge cranes or scaffolding could reduce delays, but it’s unlikely the cash savings will get passed on to the consumer. We can dream though, right?

What do you think of drones being used? Innovation? Or technological invasion?

Previous articleThe Rembrandt Days: Head to Leiden and Travel Back in Time to the 17th Century!
Next articleThe Dutch are Donating a D-Day Flag Back to the US – But Trump Refuses to Come to the Netherlands

The Dutch start-up European Sleeper is introducing a night train that will take you from the Dutch capital via Rotterdam...
Read more